Bennett Liu (12) finds his philosophy and purpose in life 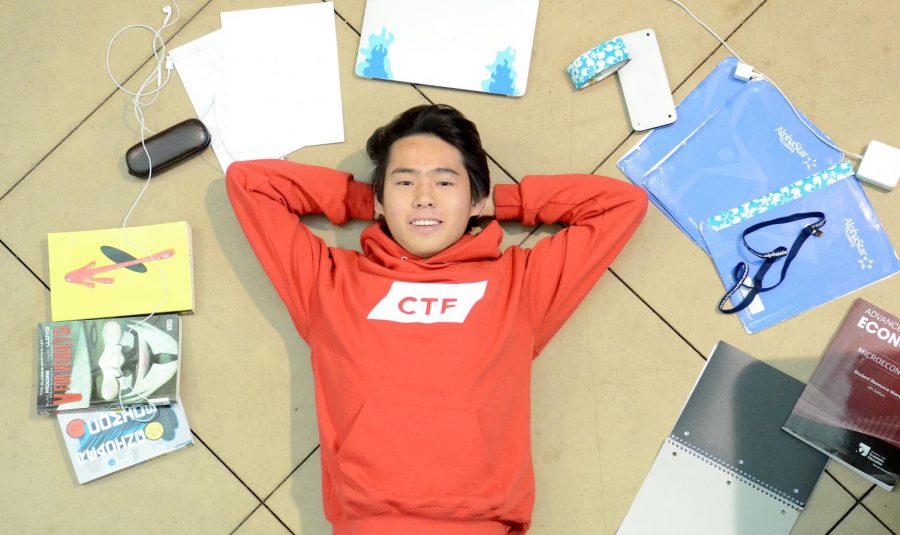 “I definitely do programming, and that's my thing for sure. But I also like other stuff. I guess the best way I can describe myself is like organized chaos. Everything is happening in all sorts of all but limited in some way. It's like split identities, but they're all unified in some way that I don’t know,” Bennett Liu (12) said.

Dressed in a bright red Harker CTF sweatshirt and blue jeans, Bennett Liu (12) dumps out the contents of his backpack on the chilly Nichols Hall floor. Out tumbles a copy of V for Vendetta, a tangled pair of earphones and a pack of blue floral tape, to name a few.

Bennett’s wild assortment of objects in his backpack describes himself in a seemingly perfect manner—organized chaos.

At school, he is involved in a number of activities like Harker Dev, the Gender and Sexuality Alliance club, Programming Club and student council. In his free time, Bennett fences, competitively programs and works as an instructor at a learning center.

“It’s fun,” Bennett said when asked about what drew him to programming. A common thread among his various passions, he participates in things that have value to him, things that matter to him and only him.

Bennett joined Harker Dev, a student organization that creates user-friendly projects for the school community, in junior year, his first project being a Chrome extension to add class names to the bell schedule page.

“With Harker Dev, it’s more about creating something with others and having that benefit people. When I made the initial Chrome extension, it was like 100 lines of code, but I was really proud of it because I thought I had something that people can actually use,” he said. “When you’re doing something that has even a 0.1% improvement in someone’s life, that just makes you feel better.”

Bennett has a philosophy, a belief that dictates what he thinks his purpose is in life.

“We’re all just groups of atoms floating around in an abyss, and that’s kind of boring. I feel like what I want to do is make the world better so that the next group of people who are floating through the abyss without meaning do it more comfortably,” Bennett said. “That’s not necessarily echoed in every aspect of my life, but my eventual hope is that all the little things will come in handy to be able to help someone in some way.”

His outward compassion and generosity are reflected in his friendships with his peers. Senior Mihir Sharma first met him when Bennett joined Harker as a sophomore, but they became close midway through junior year. The two now eat at Iguanas almost every day where they ruminate on “politics, computer science and just fun, stupid stuff [they] find interesting.”

“He’s kind. He’s never going to be mean to someone. He’s always willing to help, and he’s just a good person to have around,” Mihir said. “Everyone likes him, Bennett’s not the kind of person that people are going to dislike.”

Bennett began teaching at AlphaStar Academy, a learning center that teaches math, programming and physics, two years ago. Not only has it given him a valuable job experience, but it has also helped Bennett cultivate different branches of his own persona.

“At school, I’m more loose, at home I’m more quiet, and as a teacher, I think I’m actually a little less extroverted, but there’s a different approach to each one,” he said. “I’m a student, I’m a teacher; I’m at the front of the classroom looking at all these kids and teaching them, and somehow they’re actually learning.”

Bennett’s own teacher Dr. Eric Nelson, who has mentored him through Harker Dev, ATCS: Expert Systems and ATCS: Neural Networks, commented on his ability to remain organized and act maturely.

“He comes across as a teenager, but at the same time you could’ve dropped him into an executive office suite without too much difficulty and have had the same conversation,” Dr. Nelson said.

Having a conversation with Bennett quickly turns into a metaphysical discussion about the ins and outs of the universe. He has his own opinions and reflections on matters that are so intricately formulated it’s humbling to listen to.

“Life is about being able to see things from a lot of different viewpoints, and even though some humans seem much higher than us, they’re all human, and they’ve all experienced similar lifestyles, and you realize the universality of who people are,” Bennett said.

With Bennett’s unexpected life revelations and coding expertise, Jin Tuan (12) was originally intimidated by him, but they’ve now fostered a close friendship.

“Last January we stayed up kind of late at night and drew random doodles on an online whiteboard, and it just devolved into this beautiful mess of thoughts manifested poorly on a screen,” she said. “Bennett brings out the good chaos in people.”

Chaos — complete disorder and confusion. In the midst of all the programming competitions and student council duties and tens of other activities, there exists a high school senior, one who wishes to make a positive impact on his community, one who is trying to learn and understand the world, one who is the perfect manifestation of organized chaos.

“I definitely do programming, and that’s my thing for sure. But I also like other stuff. I guess the best way I can describe myself is like organized chaos. Everything is happening in all sorts of all but limited in some way. It’s like split identities, but they’re all unified in some way that I don’t know,” Bennett said.