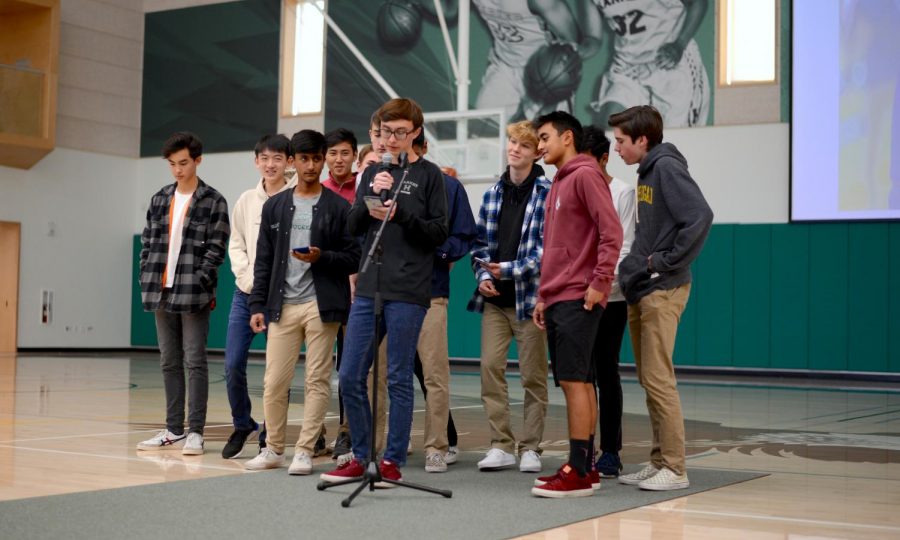 Avi Gulati (12) started off the meeting by welcoming everyone to 2020 and stating his new year resolutions.

Roma Gandhi (12) announced on behalf of the Student Events Committee that the deadline to sign up for Hoscars is Jan. 20. Applicants need to submit their Hoscars submission form and email Roma their video audition. Roma also clarified that one person can participate in more than one act, as long as they are not the only person in both acts.

Adhya Hoskote (12) announced that there is a meeting in the team room at 1:00 pm during long lunch today for anyone interested in swimming or playing boys volleyball.

Julia Biswas (11) announced a guest speaker event on behalf of Female Empowerment Club (FEM). Cathy Cassady will be discussing growing up in the Bay Area in the 1960s and the lives of her parents at 12:45 p.m. on Thursday, Jan. 9 in upper school english teacher Charles Shuttleworth’s room.

Student Directed Showcase (SDS) directors Kathy Fang (12), Katelyn Chen (12), Joel Morel (12) and Shyl Lamba (12) played a video previewing SDS and announced that SDS will be taking place at 7 p.m. on Friday and Saturday. Tickets can be bought at tiny.cc/SDS2020.

The Campus Development Committee, comprised of student council members Michelle Jin (9), Rupert Chen (9), Aaditya Gulati (10), Mihir Sharma (12) and Andrew Lu (11), announced that there would be a new basketball hoop installed by the end of the week. Basketballs will also be available for students to borrow at the Dobbins office. In addition, student council will also install Four Square and a new white board in the Nichols rotunda.

Natasha Yen (11) and Karan Bhasin (11) spoke about their experience attending the People of Color and Student Diversity Leadership Conference in Seattle in December.

“The conference in Seattle was a really great experience,” Karan said. “We met some unique people around the country and heard from some amazing speakers.”

Upper school history teacher Mark Janda and upper school art teacher Pilar Aguero-Esparza announced that the Student Diversity Leadership Crodnonference will be taking place in the RPAC on Martin Luther King’s Day and encouraged both students and faculty to attend. Dr. Rodney Glasgow, a diversity facilitator, will be the primary speaker. Those who attend will have the opportunity to participate in workshops with Rodney and have conversations about diversity.

To end the meeting, Academic Dean Kelly Horan informed the students about schedule changes for second semester. From now to Jan. 15, students may request changes to their schedule. From Jan. 16 to Jan. 22, course requests are closed. Then, from Jan. 23 to Jan. 31, students may request changes again. All requests should be submitted to Director of Standardized Testing and Scheduling Troy Thiele through email at [email protected]

Horan also spoke about course selections for the next school year. After giving an anecdote about the paradox of choice, she announced the new history and social science semester electives: Civics, Social Psychology, Introduction to Ethnic Studies, Introduction to Social Justice, and, open to seniors only, Honors Modern International Topics. Kinetic Krew will be an extra period option and the Study of Technical Theater will also be added. There is also a new course called English 4: The Modern Essay.

Horan also announced that Course Selection Information night will be on Jan. 23 in the Nichols Atrium. Parents will be receiving an invitation in email, and students are not required to attend.

Lastly, Horan announced that she will be sending out the google form for next school year’s course selections next Monday and the form will be due on Jan. 28. Students will also have to fill out an academic plan on Infinite Campus with their chosen courses.