Giving during the holidays 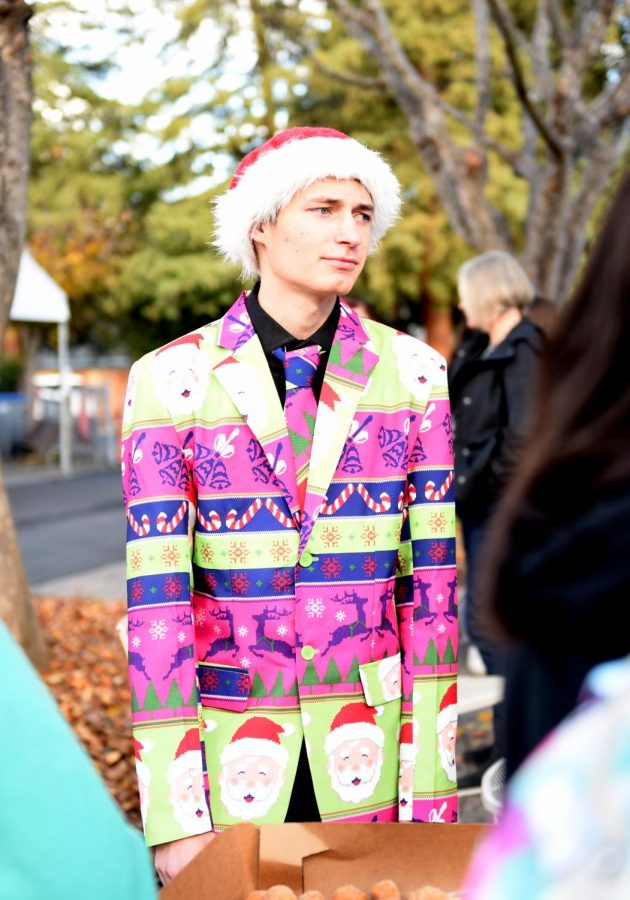 Griffin Crook (12) stands next to the doughnut holes he purchased dressed in a festive blazer and Santa hat. Griffin announced during school meeting on Dec. 6 that he had purchased 2000 doughnut holes for his fellow students to enjoy in the spirit of holiday cheer.

by Nicole Tian and Arely Sun

After the conclusion of the previous announcement, the projector in front of the school assembly simply flashed to display a single slide introducing Griffin Crook (12). A ripple of chatter spread through the crowd as he stepped up to the microphone dressed in a brightly patterned festive blazer and a Santa hat.

Rather than introducing a club event or a fundraiser during his school meeting announcement on Dec. 6, Griffin simply stated his mission to foster friendship within the community, ending with the declaration that he had purchased 2000 doughnut holes for the student body to enjoy. The gymnasium erupted in a cheer of disbelief as he ran back up the stairs to organize tables laden with boxes upon boxes of treats in front of Manzanita, soon engulfed in a crowd of enthusiastic students.

“It started in August when I wrote down ideas on how to become friends with everyone,” Griffin said. “It’s my senior year, and I wanted to take care of everyone here.”

Though Griffin’s idea was elaborate, his goal was simple: holiday cheer. This goal was reflected throughout the rest of the upper school community this holiday season as students and faculty around campus participated in holiday philanthropy through volunteering and nonprofit organizations.

One tradition is for students and faculty to volunteer at Christmas in the Park. The Office of Communications reached out to organize an activity at Christmas in the Park for students to create crafts with young children every Saturday of December. Director of Community Services Kerry Enzensperger recalls bringing her advisory to the event in past years and taking them to eat at Johnny Rockets right after, one of her most cherished memories of volunteering.

Upper school biology teacher Dr. Kate Schafer’s sophomore advisory started a tradition of volunteering at the craft stations at the fair last year and participated again this winter. Rather than Schafer leading the activity, advisory members themselves suggested volunteering at the event.

“It was motivated by the advisory rather than by me, and I think that’s one of the things I love about being an advisor,” Dr. Schafer said. “Especially at this stage, I think our advisory has come together and become a cohesive unit that’s driven by the interest of the advisory itself and the students.”

Schafer explains the advisory’s desire to give as a response to holiday traditions.

“[During] the holidays, it’s easy to help because there are so many programs and organizations that are in place to try to help people, and many of them have a bigger presence around the holidays because of the fact that, for better or for worse, this time of the year has become a time where there’s a lot of thought and focus on spending money,” Dr. Schafer said. “And to use that as an opportunity to spend money to help others, I think it’s just wonderful.”

In addition to volunteering at Christmas in the Park, the group hosts a Secret Santa gift exchange where participants draw names of people to give presents to while keeping their identity hidden. Advisory member Alice Feng (10) appreciates the generous nature of the advisory community.

“I really love the idea of our advisory Secret Santa because I get to give a gift to someone I don’t know as well even though they’re in my advisory. And I think that by being able to exchange presents, I get to know my fellow advisory members better,” Alice said.

Another program that has been integrated into Harker’s holiday philanthropy is Gift of Hope, an annual holiday gift program to provide items to homeless and low-income families. Assistant Head of School Jennifer Gargano connected Enzensperger with a member of the staff at Gift of Hope, with students signing up for the Adopt a Family program to fulfill a family’s needs for the holiday season.

Students have extended the holiday spirit of giving into routine volunteering throughout the year by participating in philanthropic organizations. Junior Bryan Zhang is the founder of one such organization, World Toys for Children, which he launched at age nine in an effort to support underprivileged children with medical issues or limited access to education. As the organization has developed, Bryan has tailored it to focus on children overall and raises money for the cause through donations to hospitals and fundraisers.

After raising funds overseas, Bryan has also experienced the results of his work firsthand, as in a trip to rural China in the summer before his freshman year when he visited a school of orphans and children whose parents who could not afford to stay with them.

“[The school] was so different from ours, but still, all the children were so happy and joyful,” Bryan said. “That really motivated me, and I put mini-libraries and bookshelves in each one of their classrooms, and just the fact that they were so happy even though they didn’t have much and they were so welcoming to me was really memorable.”

Aside from running his own nonprofit, Bryan also participates in Nanoseed, a student-run organization with the goal of raising money for scholarships business loans and student loans in China. Directed by Andrew Sun (11), it is another prominent service-based organization at Harker with branches across 12 Californian high schools. Bryan is currently the director of the Harker branch of Nanoseed, which held a benefit concert last year in the Rothschild Performing Arts Center, raising a profit of over 8000 dollars that made its way to students in China. During this holiday season, Nanoseed held a holiday fundraising sprint from Dec. 3 to Dec. 20 in celebration of Giving Tuesday on Dec. 3.

When asked about the purpose of volunteering, whether it be for the local community at Christmas in the Park or students overseas, Enzensperger encourages students to look outside the boundaries of their required community service hours to find a genuine interest in philanthropy, possibly launching off of the heightened spirit of giving during the holiday season.