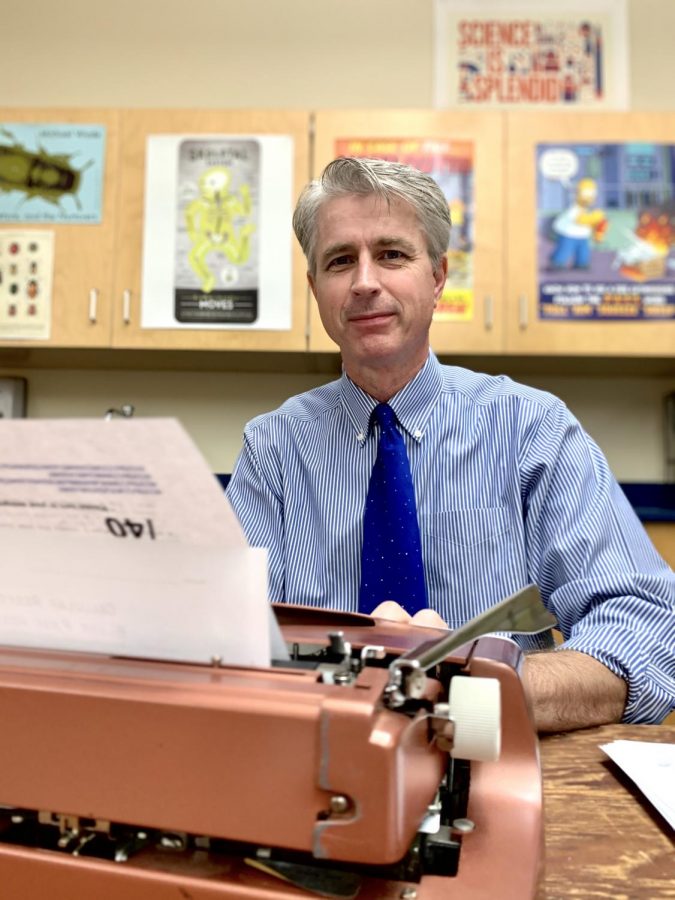 Biology teacher Thomas Artiss, at a thrifted typewriter that he brought to his classroom for students to experiment with. In his Heart of Harker guest column, Artiss responds to the newly popularized phrase "OK Boomer."

There’s a new meme in town. Like all memes, it is catchy, memorable and even mildly amusing. Although the origins of the phrase are debatable, the phrase “OK Boomer” seemed to have gained traction about a year ago. The intent was to offer a simple, eye-rolling and dismissive retort to criticisms leveled at millennials on Twitter. But like all memes, it soon made the rounds on Instagram, Reddit and inevitably TikTok. It was even used by a 25-year-old politician to silence an older member of Parliament who heckled her while she was speaking about the average age of members of the New Zealand parliament.

It is not surprising that memetic evolution would produce new variations on dismissive catch phrases. My generation popularized “whatever” (uttered in Valleyspeak) to the point that a 2010 Marist poll ranked it as the most annoying word in conversation. Martin Lawrence introduced the phrase “talk to the hand” in the ‘90s. My mother used to frustrate me by saying “well, bless your heart” in the most patronizing voice she could muster whenever she disagreed with my arguments.

But “OK Boomer” seems to be different; it’s not just that it seems aimed at my particular demographic (I actually missed the baby boomer boat by two years). And it’s not that I have just reached an age where I am generally misanthropic and oversensitive about everything because I did not take my Metamucil (I don’t take Metamucil, for the record).

No, “OK Boomer” seems to cut to the quick for me because it does not appear to simply be a glib, trite and lazy rejoinder. Rather, the phrase seems to imply that a specific subset of the population is unwilling, unable or incapable of understanding younger generations. It conjures up images of doddering old men in ill-fitting ball caps sitting in lawn chairs yelling at neighborhood kids to stay off their grass, or gaggles of intolerant and unyielding seniors power walking laps around the mall. It implies that people who are roughly my age simply don’t get – and don’t want to get – the youth of today.

On the one hand, this sentiment is nothing new; every generation believes they are socially and culturally unique and that older generations are simply out of touch. We tend to forget that everyone was young once, and the trends that defined them – from fashion to music to political activism – may be antiquated by today’s standards, but they were countercultural in their time. The cutting-edge jazz of the ‘30s was replaced by rock and roll in the ‘50s, grunge in the ‘90s, and rap and hip-hop in the 2000s.

And millennials, I’m sorry to tell you that Billie Eilish, Ed Sheeran and Juice WRLD are simply today’s iteration of Stevie Nicks, Bob Dylan and Run DMC. And unbelievably, those artists will seem quaint and not-so-edgy when you hear them on an oldies radio station in a few years.

On the other hand, the notion that anyone over 40 — and baby boomers in particular — are stodgy, recalcitrant and fearful of change is patently false. In fact, I would argue that the baby boomer generation has experienced more change than any other generation in history. Moreover, they were not passively resistant to the change that was happening around them; they were the agents of said change. So, your grandparents may complain that kids today are entitled, or that they don’t know the value of money, or that hip-hop fails to make them want to hip or hop, or that you seem oddly self-obsessed and pathologically consumed with social media. But to assume that they say these things from a place of deliberate incredulity is convenient, but also wrong.

I am a shade over 50 (OK, 53 is more than a shade), and two years younger than the youngest baby boomer. But I have seen a lot in my lifetime. I have seen humans walk on the moon, explore deep ocean trenches, map the genome, clone a mammal, discover Higgs boson particles and find evidence of water on Mars.

When The Eagles released “Their Greatest Hits (1971-1975)” in 1976, I bought the album on vinyl and played the grooves out of it on a scratchy turntable. I have since replaced it with a cassette tape (so I could listen to it on my Walkman, the forerunner of the iPod which was the forerunner of the iPhone), a CD, and then on iTunes. I still own a turntable, but now I only use it to prop up my iPad so I can play The Eagles on Pandora. And I am aware that I should be using Spotify, but can I afford another change?

In 1980, my family bought Pong, and kids in my neighborhood lined up to use a 2D paddle to slap around a square ball on my TV while our real ping-pong table gathered dust. In 1984, I received a Commodore 64 for Christmas, and I was the only kid on my block with a word processor. Ten years later I opened my first email account. Five years after that, I stopped using Yahoo! because Google had arrived.

Movies used to only be viewable in movie theaters. When VHS beat out beta-max (like cassettes beat out 8-tracks), we would spend Friday evenings milling around Blockbusters trying to get a copy of a newly released video. No one under the age of 30 could possibly understand what “please be kind, rewind” means since the last Blockbuster on earth closed last year. I stopped going to video stores when movies arrived by mail from Netflix, and I stopped waiting for movies in the mail when streaming videos and RedBox appeared.

I have seen social changes that could not have been imagined at the turn of the 20th century. I saw the first woman appointed to the Supreme Court. I saw the Berlin Wall come down and communism fail in Europe. I saw abortion be legalized, marijuana be decriminalized and same-sex marriages performed and recognized in the United States. I have witnessed impeachment hearings for three sitting US presidents. I have seen the first black president elected and the first woman Presidential nominee of a major political party. I have seen towers fall, space shuttles explode and an attempted presidential assassination. I lived through the assassination of John Lennon and the suicide of Kurt Cobain. I was barely a year old when Jimi Hendrix doused his Fender Stratocaster with lighter fluid and set it on fire at the Monterey pop festival.

I have witnessed crises on a global scale as well as efforts to respond to problems humanity has faced. I have seen the warming of the planet, the meltdown of nuclear reactors and the emergence of AIDS. And I have seen the biggest pop artists of the 80’s perform “Do They Know It’s Christmas?” to raise money to reduce famine in Ethiopia. I have seen the development of antiretroviral drugs to treat HIV, the total elimination of smallpox, the rise of the Me Too movement and the passage of legislation to protect the environment and endangered species.

To be sure, baby boomers (and Gen Xers) did not fix it all. Nor did they cause it all. Every generation falls short in some respects, but they do move the ball forward. And it is my belief that Boomers and Xers have witnessed social, political, cultural and scientific advances at a greater accelerated pace than all generations that preceded them. For the most part, baby boomers have embraced, adjusted to and helped drive the countless changes that we take for granted today. They are not resistant to change – they actually define it.

None of this implies that even the most socially malleable among us is not prone to tenaciously clinging to long held norms or ideals. And even while social norms and conventions are constantly shifting, we can all be resistant to embracing change. But before you offhandedly dismiss an adult who you feel doesn’t understand your generation, consider for a moment the amount of change they have experienced in their lives. Maybe they really are being condescending or narrow-minded – in which case you might be justified in responding with an “OK Boomer” or a “whatever”.

But maybe they have a point. Maybe they have tried, and they really don’t understand. Maybe they just need someone to listen and cut them some slack. Because after all, it would seem unlikely that they are incapable of understanding change.