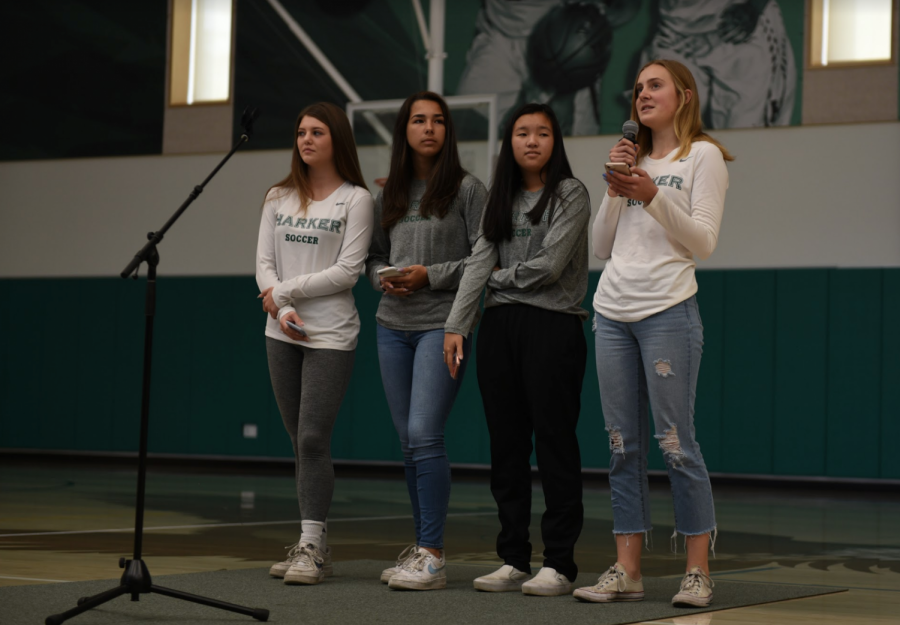 Multimedia Club presented a video on Ayla Tannurhan (12)’s installation for Art Club’s student showcase gallery under Shah Hall. Nina Gee (12) and Nellie Tonev (12) announced a reception during long lunch at 1 p.m. next Tuesday by the gallery. Free snacks will be provided.

Michael Eng (11), Sidra Xu (11) and Luisa Pan (11) announced that Science Competitions Club would be providing mock science finals. Students will have the option to take a practice final in a simulated testing environment next Friday from 3:30 to 4:30 p.m. in Nichols Auditorium. Students could also take the practice final home. The practice finals have been approved by teachers. Solution guides will be emailed to those who sign up at tiny.cc/mockfinals19.

Sarah Baicher (11), Emma Boyce (11), Aria Wong (11) and Ashley Barth (10) announced the soccer program’s annual event Kicks Against Cancer on Jan. 10, where the boys junior varsity soccer team, girls varsity soccer team and boys varsity soccer team will all be playing home games. Shirts, baked goods, blankets, stickers and lanyards will be sold. All proceeds will go toward Camp Okizu, a summer camp for kids affected by cancer. Additionally, on Jan. 8, the soccer program will be partnering with Chipotle to fundraise. Students will also have the opportunity to fill out pieces of paper with encouraging messages during advisory, which will then be hung up around the school.

Griffin Crook (12) made an announcement while wearing a red Santa hat.

“I just want to tell you guys that I love everyone here, and I also love the holiday season a lot,” he said. “So I bought 2,000 donut holes [for you all to eat]. Happy holidays.”

David ended the meeting by delivering the weather report: showers of donut holes.