Judge rules in favor of Harvard in affirmative action battle 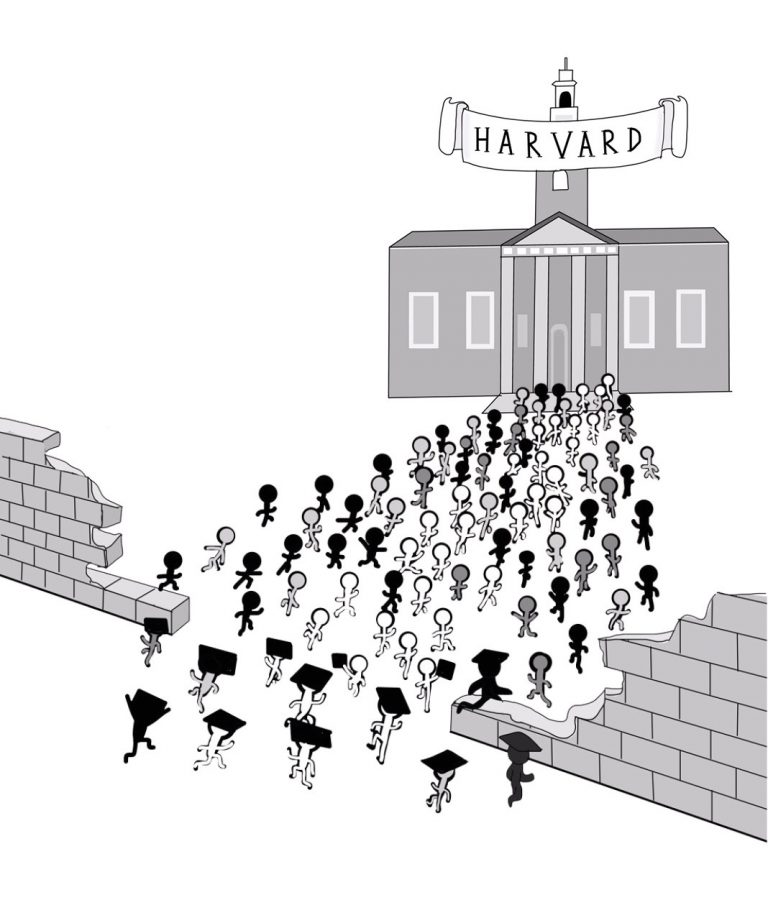 In the verdict of a lawsuit claiming that Harvard University discriminates against Asian American applicants, the judge in the trial ruled on Oct. 1 in favor of Harvard’s admissions practices and defended the use of race-conscious admissions in ensuring diversity on college campuses.

by Eric Fang and Sara Yen

In the midst of college application season, the results of a lawsuit claiming that Harvard University discriminates against Asian American applicants have sparked conversation among upper school students, a majority of whom are Asian American.

The judge in the trial, Allison Burroughs, ruled on Oct. 1 in favor of Harvard’s admissions practices and defended the use of race-conscious admissions in ensuring diversity on college campuses. The plaintiff in the five-year lawsuit, Students for Fair Admissions (SFFA), said in an Oct. 5 statement that it would appeal the court’s decision.

In the lawsuit, SFFA alleged that the university’s “whole person review” disadvantages Asian Americans. It presented an analysis of over 160,000 Harvard applications that found that admissions officers regularly ranked Asian Americans lower than other racial groups on personality scores.

According to director of college counseling Nicole Burrell, most U.S. colleges practice some form of holistic review.

“[Colleges] are picking you because they think you’re going to be interesting to talk to at lunch, an interesting dorm roommate to have, someone bringing a perspective to the classroom,” Burrell said. “Whole person [review] can be anything that gives the college a sense of what is that experience, what is that background [that you bring to the table].”

In her ruling, Burroughs acknowledged that Harvard could improve its admissions practices by implementing implicit bias training for admissions officers and upholding clear guidelines on the use of race. Apoorva Rangan (‘15), who graduated from Harvard this May, agreed with the ruling that Harvard’s consideration of personality in admissions is “necessary but flawed.”

“You are hugely susceptible to personal biases and vague ideas about what something like ‘courage’ is,” she said. “It needs to be clarified what exactly the qualities are that someone is looking for in an applicant.”

Asian American groups hold divided opinions on the fairness of affirmative action. The Asian American Coalition for Education (AACE) joined 295 other Asian American organizations in signing a statement in support of SFFA.

“The schools can just consider the applicant’s application materials and see their life experiences, their perspective. They don’t even need to know his or her race,” Swan Lee, AACE co-founder, said in an interview with Harker Aquila. “Race has no other function but to manufacture racial stereotypes and perpetuate racial discrimination.”

In his brief, Jang Lee wrote about his experiences as a Korean American student from a predominantly white high school in Texas. Lee graduated from Harvard this May and believes that the racial diversity he encountered at Harvard proved integral to his college experience.

“It’s important to acknowledge that no one is saying that Asian Americans are not discriminated against,” Lee said in an interview with Harker Aquila. “But ignoring race in the admissions process is not the solution to the kind of discrimination that Asian Americans face. In fact, we should be able to acknowledge that race has a very tangible impact on how we live our lives.”

The ruling also prompted discussion of admissions practices favoring legacy students, athletes and children of donors or staff. A study published by SFFA’s expert consultant last month found that 43 percent of white students admitted to Harvard fell in one of the aforementioned categories, as opposed to less than 16 percent of all other racial groups.

Other studies have found that admissions policies based on socioeconomic status (SES) promote racial diversity, though proponents of affirmative action argue that class-based admissions cannot substitute for race-based admissions.

“I think both [race and SES] should be considered, and we need to really break out of this either/or framework, where it’s either race or either SES, and really push universities to broaden access across all of these categories,” Lee said.

Hundreds turned out to protest his amendment, Senate Constitutional Amendment No. 5 (SCA-5), which ultimately failed to pass.

“I was deeply involved in the opposition to SCA-5 because at the time many parents and community members were shocked at how the bill would impact not only the college applicants in general but more specifically the Asian applicants,” Yang Shao, Fremont city council member and former school board president said. “Many of [my constituents] were very disappointed by the judicial ruling in favor of Harvard.”

With elections coming up in 2020, opposition to affirmative action has drawn some Californian Asian Americans to the Republican Party. On the Facebook page for his 2020 State Assembly campaign, Republican Benjamin Yu criticized the Harvard ruling.

“This country has long passed the usefulness of affirmative action,” Yu said in an interview with Harker Aquila. “The Republican Party’s emphasis on values such as equality and freedom and the Constitution are more in favor of my view regarding affirmative action.”

The battle around affirmative action is far from over. With SFFA’s appeal, the case is expected to last several more years and potentially reach the Supreme Court, which currently has a conservative majority.