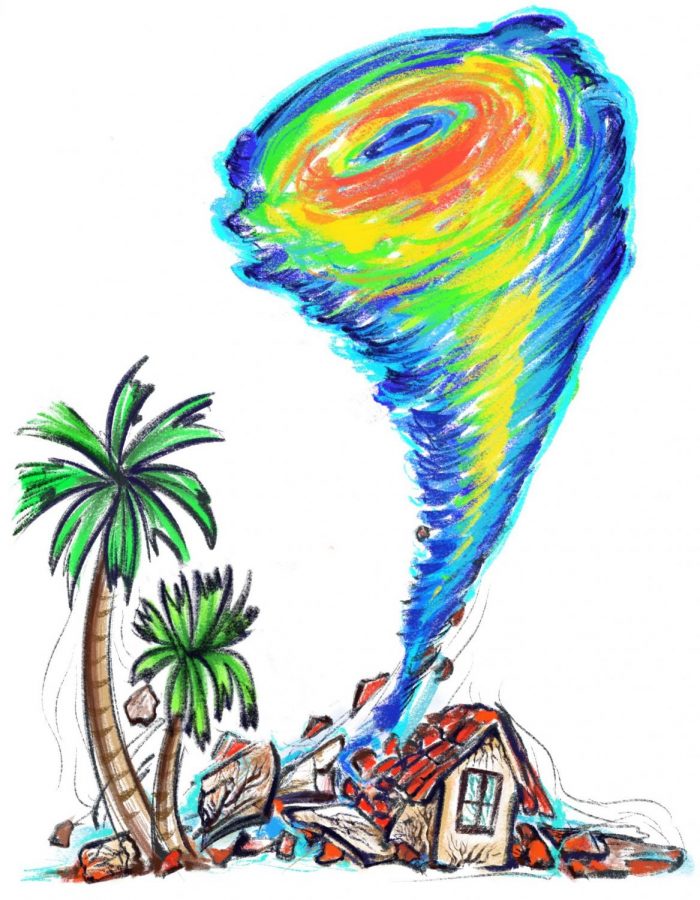 Hurricane Dorian hit the Abaco Islands in the northern Bahamas on Aug. 24.

by Anmol Velagapudi and Irene Yuan

Dorian, the latest major incident of climate change, was the most intense tropical storm on record to hit the Bahamas. Causing more than seven billion dollars in damages, it is just one of the many hurricanes and cyclones that have occurred this year. As weather changes, storms escalate and the planet warms, there have been many who oppose the evident consequences that stem from disregarding global warming.

On Aug. 24, Dorian hit the Abaco Islands at a max speed of 185mph. The category five hurricane had killed over 56 people.

“Hurricane Dorian, along with other natural catastrophes, [was] worsened due to global warming,” Camilla Lindh (10), a member of the green team who attended the climate strike said. “Green Team allowed me to have a better understanding of what was happening around me in terms of climate.”

The warming of the earth can factor into the frequency, intensity, severity, and duration of natural catastrophes such as hurricanes like Dorian. According to the UCAR Center for Science Education, the sea surface temperature increased by an average of 1.5 F between 1901 and 2016. These warmer waters intensify hurricanes and tropical storms, causing faster wind speeds and high levels of inland flooding.

Aside from warmer waters, climate change also leads to higher sea levels. According to the U.S. Global Change Research Program, the global sea average has risen about three inches since 1993, out of the seven to eight-inch rise since 1900. Heightened sea levels create more flooding and push more water onto land because they cause higher storm surge levels.

But it is not just hurricanes and tropical storms that are affected by this. Different extreme weather events are intensified: for example, more drought is expected in dry places. Similarly, in wet places, there can either be more rain and moisture expected, or the same annual average of rain, but coming in shorter spurts of higher precipitation. In predictions for the future, the trend of an increase in extreme weather, drought, precipitation, flooding, hurricane and heatwave is expected to continue.

“The projections are essentially ones in which we simulate the environment, simulate global climate, and then add in what we expect to see in future scenarios in terms of say, carbon dioxide. So what we expect to see based on these simulations is just more of what we are starting to see now,” Ilian DeCorte, a third-year graduate student in the atmospheric and oceanic sciences department at UCLA said. “Essentially, in future projections, it depends on how much more emissions we emit and how well we do at taking greenhouse gases out of the atmosphere and how the oceans are interacting with that, so that’s where the variability comes in, but if we continue to release emissions, we will continue to see an increase in the phenomenon that we are seeing now.”