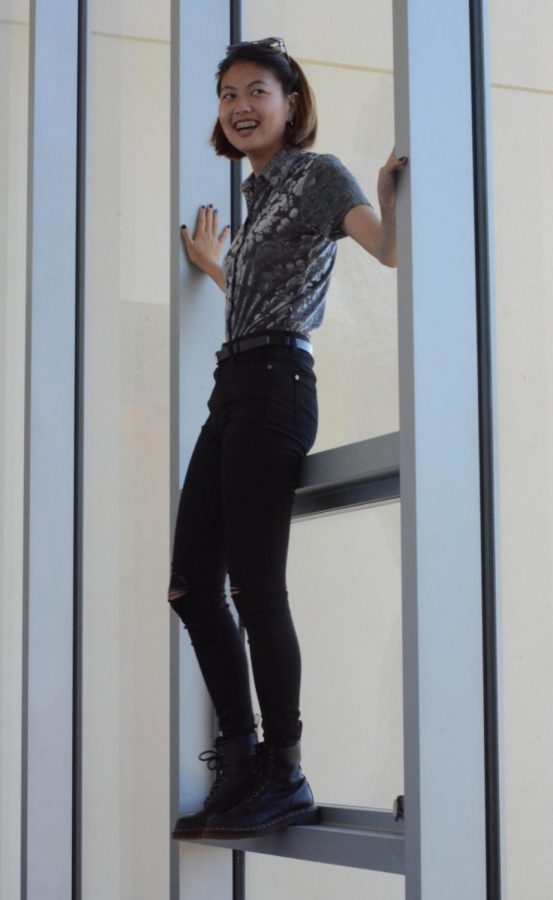 “The universe is huge. Whatever ripple your little sand grain makes in this pond of a universe, those ripples are insignificant in the grand scheme of things. Those consequences that you think are going to crush down on you aren't that big when you are looking at the universe's scale. And you might say, 'Why not just stay in bed then and do nothing because nothing I do is worth it.' Well, then why not do everything then. It's kind of a way of looking at [life]. Just go crazy,” Jin Tuan (12) said.

Clicks from her black Doc Martens hitting the pavement resound as Jin Tuan (12) confidently struts down the path between the RPAC and Main Office. A floral velvet button-up tucked into ripped black jeans peeks out from her lengthy trench coat. Although her hands are buried in the deep pockets of her coat, she still gestures with them, accentuating her speech. Dark and serious, her clothes both complement and clash with her expressions, which shift from sincere to animated as she speaks about the different moments in her life.

“I was coddled a lot more as a kid compared to my siblings, my two older brothers,” Jin said. “People say in high school you’re supposed to transition your work ethic from when you were in middle school, but I feel like I never made that transition.”

Even though her brothers would call her spoiled, Jin never fully identified as pampered until she was applying for boarding schools before high school.

“My work ethic was so bad that I wrote the application in six days before the due date. I started it then, and I realized this is what [my brothers] meant by I was never pushed, and I don’t push myself in the same way they pushed themselves or were taught to,” Jin said. “That was when it occurred to me that I should probably have higher expectations for myself.”

Over three years later, one way that Jin is fulfilling her higher personal expectations is with her role as co-president for the organization New Visions of Tomorrow (NVoT), which fundraises for visually-impaired (VI) youth in the Bay Area. Responsible for organizing outreach and fundraising events, she serves as an important leader for the nonprofit.

“Now that I’ve actually had to take over [as co-president], while I have built up skills over the year, it’s just become that much more real for me because I’m one of the leading members,” Jin said.

When one of her friends was developing an eye disease, Jin felt more personally connected to NVoT’s cause.

“There are also so many people who have to deal with being substantially visually-impaired, but no one really thinks about differently-abled people,” Jin said. “It’s a new perspective on seeing life, and I started getting engaged and wanted to help out and allow these VI youths to do things they might not be able to do otherwise.”

In addition to heightening her personal standards and expectations, another change in Jin’s life as she transitioned into her high school years was leaving ballet. Even though she left mainly as a result of a hip injury, Jin learned influential principles from the art, which she had started when she was two.

“Passion [comes] from Latin, ‘passus,’ [meaning] having to suffer, and I learned that from ballet: you suffer for the art because you appreciate it so much, and you want to do it,” she said. “At the end of class, some people had bloody toes, and other people were like, ‘My blister popped, whatever, I’ll keep going.’ Seeing that made me admire ballerinas and drilled into me the importance of resilience.”

Besides an alteration in hobbies, another advancement in Jin’s maturation since middle school was learning to stand up for herself more and embody resolution.

“I used to be a big old pushover. I avoided confrontation as much as possible, so if I could compromise myself in order to make other people happy, I would,” she said. “But I think as I’ve grown, I realize you can go with the flow, but that doesn’t mean you have to compromise yourself.”

Others have also noticed Jin’s development of character. Grace Hajjar (12), Jin’s close friend, agreed that she has become more assertive and self-possessed.

When discussing the importance of being genuine, as evident by her increased hand motion and quicker speech, Jin strongly advocates for being unmistakably true to oneself.

“[Everyone] is given this one life, and you can make whatever you want out of it, so why be unsatisfied with what you’re doing and who you are in order to please other people?” Jin said. “Don’t be sad for other people to be happy. It doesn’t make sense for you to not be yourself, because the universe might not revolve around you, but your life does.”

Jin’s embracement of life is evident to the people close to her. Anthony Silk, upper school mathematics department chair and chair of honor council, which Jin is a part of, fondly recalled seeing Jin when leaving school.

“If I would walk outside going home, even to this day, I would see Jin. She’d be out there dancing because she’s just exuberant and loves life, and every time you see her, that is always clear,” Silk said. “It’s always a big smile, it’s always things going well and I can always count on that every time I see her.”

Spontaneity is a central characterization of Jin. Whether she’s dancing, singing, playing music, scribbling or going down Wikipedia holes, her openness and light-heartedness permeate her being.

“She’s just very creative. You can see it in the way she dresses, in the way she talks, in her ideas,” Annabelle Ju (12), Jin’s friend, said. “I don’t want to say multifaceted because that’s very cliche, but she really is that type of person.”

“The universe is huge. Whatever ripple your little sand grain makes in this pond of a universe, those ripples are insignificant in the grand scheme of things. Those consequences that you think are going to crush down on you aren’t that big when you are looking at the universe’s scale,” Jin said. “And you might say, ‘Why not just stay in bed then and do nothing because nothing I do is worth it.’ Well, then why not do everything then. It’s kind of a way of looking at [life]. Just go crazy.”