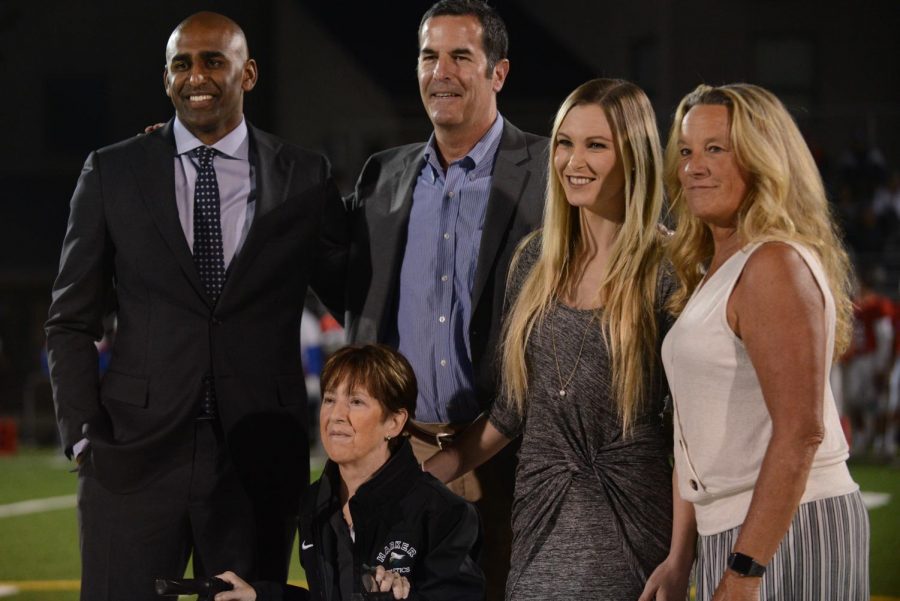 Four new inductees for Harker’s Athletic Hall of Fame were honored on homecoming night in a ceremony just before the game, where they were recognized for their dedication to Harker’s athletics program and for exemplifying the school’s values during their time here and beyond.

“[The Hall of Fame] is a way of honoring anybody that we feel has made an impact at Harker athletically,” Molin said. “Their athletic achievements [are] a huge criteria [for being chosen], but the character and what they’ve done in addition to that is of equal or more importance. We’re very proud of them, and we’re very proud of the people that they’ve become.”

Ravipati was named the Most Valuable Player (MVP) for football, basketball and volleyball in his senior year and earned all-league honors in track. After graduating from the University of San Diego, where he continued playing football, he also served as the head football coach for Menlo-Atherton until 2018, leading the team to their first state championship and a NorCal title.

Gurney was a four-year soccer and volleyball player during high school and was part of the 2007 volleyball team that won NorCals. Although she eventually chose to play volleyball for Villanova, she dominated both sports: she was named to The Mercury News All-Star volleyball team as an outside hitter during her senior year and was the CCS leading scorer in girls soccer the following season.

“[Kristina’s] initial reaction [after being chosen for the Hall of Fame] was one of surprise,” Paula Bither, Gurney’s mother and former lower school physical education teacher, said. “She knows there are many great athletes at Harker and to receive such an honor truly humbled her. Her teachers, coaches and friends all make her who she is today.”

McNealy, a four-year golfer, won the WBAL individual title his junior and senior years and went on to golf for Stanford and now the PGA tour. Even after graduating from Harker, he has left behind a reputable legacy both on the program and on his old coach and teammates.

“As remarkable a golfer Maverick is, he is even more impressive as a person. His dedication to the craft, his work ethic [and] his comportment off the course [are] what truly make [him] exceptional,” Maverick’s high school golf coach Ie-Chen Cheng said. “Maverick made me work harder and challenged me to be better. He is a big reason [for] where the program is today.”

Collins served in the athletic department from 2001 to 2015 and was Molin’s assistant for nine years. She is remembered and honored for her commitment and dedication to the program throughout her time at Harker, whether that be through volunteering to sell spirit wear at games or getting flowers for seniors on their senior nights.

“She truly cared about Harker, and she was a true Eagle,” Molin said. “She would always stop what she was doing to answer any question from a kid, coach, parent, teacher or administrator, willing to help in whatever way necessary. And she did so with a smile on her face and genuine care.”