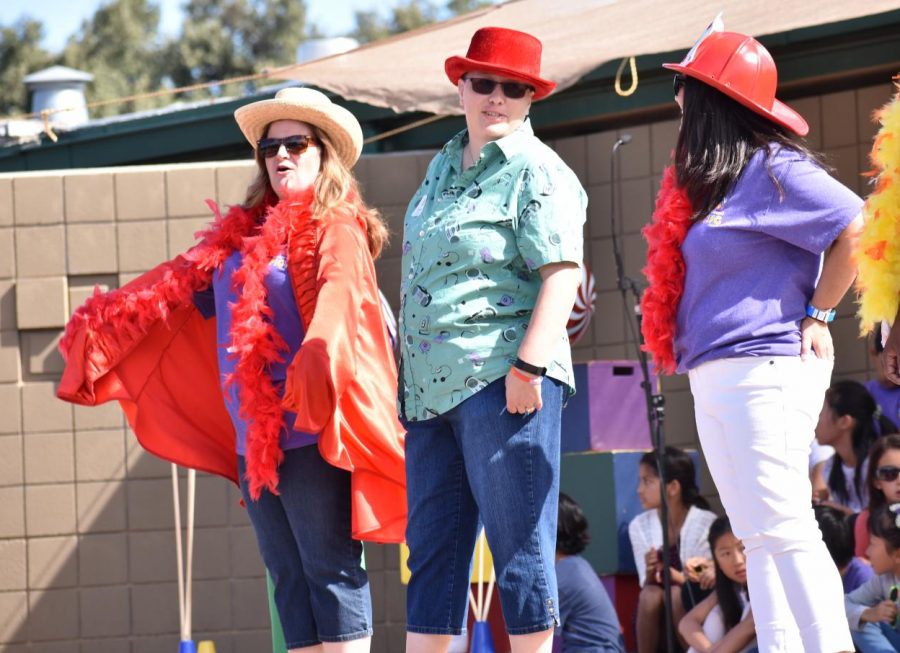 Director of Learning, Innovation and Design Diane Main acts out a part of the annual picnic show, themed "Candyland". Both students and faculty across all three campuses performed in the show, which began at 11 a.m on Sunday.

The scent of cotton candy floats amid the 25 red and white game booths dotting the blacktop at the Harker middle school. The gleeful shouts of lower school students launching themselves into an inflatable bouncy wall mix with the triumphant cheers erupting from a group of middle school students as upper school visual arts teacher Josh Martinez plummets into the dunk tank.

This moment was one out of many memories made last Sunday when students, parents, alumni and faculty celebrated the 69th Annual Family and Alumni Picnic at the Blackford campus. Around 1000 to 1200 people attend each year, according to Loni Keller, director of special events.

With cotton candy stations and sweet treats as prizes, the picnic’s theme was based on the popular children’s board game “Candyland.” This year’s festivities introduced new attractions such as the mechanical unicorn, the velcro wall and bumper cars and also brought back fan favorites like the dunk tank and the petting zoo.

Due to the positive reaction to last year’s free admission in celebration of Harker’s 125th year, admission to this year’s picnic was also free. Carnival tickets, sold for a dollar each, were used to purchase snacks and play games. The average revenue collected from the tickets sold is around 20,000 dollars, according to Keller.

At 11 a.m., performers across all three campuses danced and sang during the annual picnic show, which loosely followed a storyline based on the picnic theme. Some performances included upper school choir Downbeat’s a capella arrangement of “Na Na Na” by Pentatonix and Harker Dance Company’s choreography to a cover of Billie Eilish’s “bad guy.”

Freshman Keesha Gondipalli, who has been to the picnic nine times, enjoys both watching and performing in the annual picnic show because of the diverse array of age groups that participate.

Carnival booths also featured candy-related activities, such as the Class of 2020’s candy store, dubbed the Senior Sweet Spot, which raised money for their senior class fund. Several upper school clubs and organizations, such as the Green Team, National Honor Society, Harker Robotics and DECA also volunteered at booths, where they provided entertainment ranging from a spin-the-wheel activity with succulents as prizes to a photo opportunity with giant lollipops and candy canes as props.

For upper school Spanish teacher Diana Moss, who has taught at Harker for 24 years, the people, from long-time friends to new faces, are what make this event enjoyable every year, aside from the numerous rides and attractions.

“The fact that people are together from all four campuses, it gives us a chance to reconnect in a setting that’s not work,” Moss said. “We just have lots of fun: the food is always yummy, and I love to watch the kids perform.

Alumnus Jeffrey Niederauer (‘93), who used to work in the technology department at Harker, tries to attend the picnic every year because it allows him to catch up with both mentors and former colleagues whom he can only see at this annual event.

“[The picnic] is a good community event with lots of fun activities for the whole family and a good chance to see what’s going on in the school,” Niederauer said. “It’s amazing to me how many teachers from when I was a student are here and a lot of other friends from when I worked here too.”