Humans of Harker: Voice of the voiceless 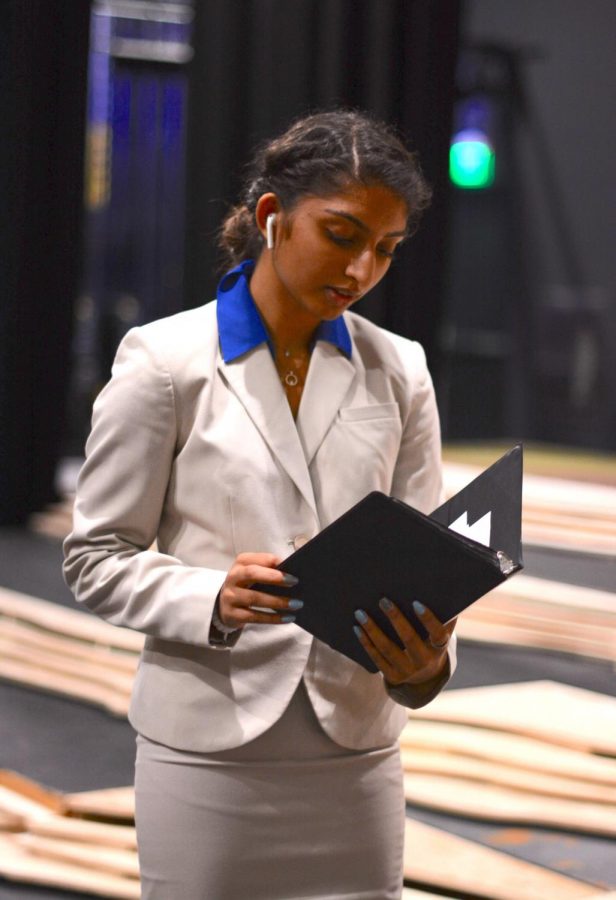 “If you don’t connect with a topic, it’s obviously really going to show, and it just doesn’t make sense, because then I don’t care about what I’m talking about. I talk about things that are really, really personal and important to me that I’ve had experience with, and every time I go out to speak, every round is ten minutes where I can force a room to listen to me…I try to hope that shows through when I perform and bringing reality to the characters I’m portraying, because in the end, everyone’s a real person,” Nikki Solanki (12) said.

Poised at the front of the room in a light pink suit and pencil skirt, Nikki Solanki (12) cracks open the small black binder in her hands.

“Speak…up,” she declares, punctuating the tentative silence. Pretending to draw a page from the binder, she looks up, snaps it shut and heaves a sigh before pushing through an imaginary door. Throughout the next 10 minutes, she switches from character to character, from Isla Vista killer Elliott Rodger to a woman in a play who moves because a man relentlessly pursues her.

“Say No,” Nikki’s recent Program Oral Interpretation, centers around the topic of sexual assault and rejection killings, where women face the threat of death after romantically rejecting a man. By utilizing comedy and drama, she shed light on the treatment of women in today’s society. After taking her performance to the California High School Speech Association (CHSSA) State Tournament in May, Nikki won first place.

“At [the state tournament]…I was so expecting them to say, ‘And in second place, Harker, Nikki Solanki,’ but they said, ‘In second place from Archbishop Mitty,’ and that was a moment when I just started crying,” Nikki said. “That was so memorable, just because it was everything that I worked for.”

Before showcasing her speeches at each tournament, each piece takes months of research and rehearsal. She finalized this speech after 200 to 300 hours of poring over manifestos, news stories and plays, the culmination of seven years in the Harker Speech and Debate program.

After finding a topic that resonates with her beliefs and personal experiences, Nikki begins the laborious process of preparing for performances, often practicing fifty different variations of a certain line using until she finds a tone that matches the meaning behind it. Apart from memorization, Nikki invests deeply in bringing her own message and pours two to three hundred hours into each performance. This quality shows through especially in Program Oral Interpretation, which requires students to link news stories, courtroom accounts and multiple other sources to a central theme.

Nikki first joined the program in sixth grade. Although she was unenthusiastic her first year, her parents encouraged her to “keep at it.” Their advice proved to be in her interest, and Nikki often competes on weekends in both Dramatic Interpretation and Program Oral Interpretation.

“I spend months researching books or plays or mock podcasts, and I read until I find something I really connect with,” Nikki said. “If you don’t connect with a topic, it’s obviously really going to show, and it just doesn’t make sense, because then I don’t care about what I’m talking about.”

Speech and Debate teacher Scott Odekirk, who has coached Nikki since her sophomore year, immediately noticed her certainty in stating and elaborating her viewpoints on personal and often loaded topics such as female empowerment or immigration.

“All of these stories that she likes to tell, and all of these themes that she portrays, she’s always motivated to speak for those and assert power for those that have not been given the credit or the power they deserve in society,” Odekirk said. “When I saw that assertiveness and that confidence right away, I knew that the best thing to do for her was to say ‘Yes, let’s construct pieces to show your power, your control,’ and she was able to show so much strength in everything she chose to do.”

Despite all the recognition that Nikki has gathered over the years, she has sometimes found it difficult to achieve those high standards. Especially during junior year, with an enormous workload, she was at times disappointed in her results.

“There were multiple points when I told myself, ‘I’m quitting speech and debate; I never want to do this again,’ and there were nights that I would just stay up crying, like ‘Oh my gosh, I can’t do this,’” Nikki said. “If I had to memorize a speech, and it was the night before because of all my schoolwork, I would just be like, ‘I can’t do this.’”

Rather than focusing on her tournament goals, Nikki revised the fundamental reason that draws her to speech and debate — spreading her message. She also drew on support from her friends and teammates, who have constantly supported her through failures and successes.

“I felt compelled to also try Dramatic Interpretation…I ended up competing with Nikki,”  close friend Avi Gulati (12), who has known Nikki since sixth grade, said. “At the [CSSSA state tournament]…me, Haris [Hosseini ‘19] and Nikki were all together, and then when Nikki went up, they called sixth place; they called fifth place, fourth place, third place, and then it was just Nikki and another competitor. When they called the other competitor’s name, we erupted in joy…We were all crying, and we were shouting.”

Besides her dedication to work in speech, Nikki works to promote awareness of women’s rights to her peers. She hopes to educate students about consent education, which teaches both young men and women to respect boundaries and that “no means no.”

“If you talk about things like Brock Turner for example at a place like Harker, a lot of kids don’t know who that is, which I just think is really, really alarming,” Nikki said. “So [I am] just bringing light to things like that, and not hiding what happens in our world. Our world isn’t just limited to academics. It’s just something that I really care about, especially because of my experience with it.”

Another outlet for Nikki to channel her creativity is theater. After beginning performing arts in sixth grade, she went on to perform in Harmonics, Harker middle school’s musical group, throughout seventh and eighth grade before focusing on the Student Directed Showcase in high school.

Whether it be “an eagerness to embrace the world,” as AP Computer Science teacher Susan King notes, or “positive energy” as described by her AP Chemistry teacher Dr. Mala Raghavan, Nikki’s effervescence shows as clearly in real life as on stage. Close friend Radhika Jain (12), who has known her since seventh grade, notes that Nikki is “full of life” and “comfortable in her own skin.”

“She’s so sure of herself, and she’s her own leader,” Radhika said. “She doesn’t try to follow anyone else, and she’s just super independent now.”

While in middle school, Nikki admired speech students who had achieved such accolades such as State Champion. Now, with her outgoing presence and daring voice, she has proven herself to be a similar role model.

“She’s been an example for the women on our team, just how to be powerful and strong regardless of the way the world wants you to be,” Odekirk said. “I think that she has helped more people than she will ever know, just by setting that example.”