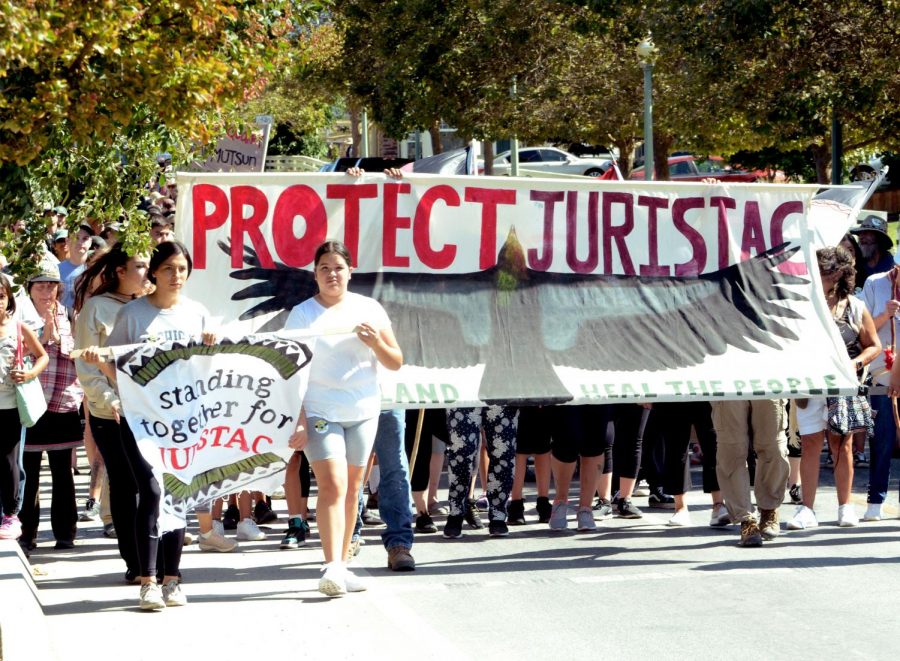 Roxanne Gaona, a senior at Central High School in Fresno, and another youth activist hold a banner reading "Standing Together for Juristac" at the front of a Sept. 8 march protesting the proposed construction of a quarry at Sargent Ranch. Local environmental groups and Native Americans have opposed the mining operation since 2016, as Santa Clara County deliberates the environmental and cultural impact of the proposal.

At the southern end of Santa Clara County, just west of Highway 101, green and gold hills stretch for over 6,000 acres. Oak and sycamore trees dot the rolling landscape known as Sargent Ranch, providing shade for cougars and tiger salamanders that dart through the tall grass.

For thousands of years, the Amah Mutsun tribal band, a local Native American group, has called these hills by the name of Juristac and considered them sacred ground.

Soon, these hills may also serve as the site of a controversial 320-acre sand and gravel mine.

The over 100 current shareholders of Sargent Ranch submitted a proposal for the mine to Santa Clara County in 2016, seeking approval to dig. Since then, ongoing efforts to promote or protest the quarry have revealed tensions between different interest groups in the Silicon Valley, including developers, Native Americans and environmentalists, as Silicon Valley continues to grow.

If approved, the quarry would create three 200-foot-deep pits and supply 40 million tons of sand and gravel to Santa Clara County over 32 years to make concrete. More concrete is required to meet the demand of an increasing number of development projects in the county, like Avalon Bay West and Santana West, which will add dozens of residential and commercial units near the upper school.

This growth may come at the expense of local groups like the Amah Mutsun tribe, which comprises nearly 600 documented Native Americans in the counties of San Benito, Monterey, Santa Cruz, Santa Clara and San Mateo. They believe the quarry will disturb their sacred grounds at Juristac, which houses their spiritual leader Kuksui, as well as four villages and burial sites dating back 15,000 years.

As the county reviews the impact of the quarry proposal, members of the Amah Mutsun have intensified efforts to raise awareness of the environmental and cultural significance of Juristac.

To demonstrate their opposition to the quarry, protesters walked five miles on Sept. 8 from Mission San Juan Bautista to the eastern edge of Juristac. Amah Mutsun leaders organized the walk “in the footsteps of [their] ancestors,” according to the event page.

Roxanne Gaona, a senior at Central High School in Fresno, led the procession of over 200 indigenous people, environmental activists and allies past leafy trees and historic adobe buildings. She held a banner reading “Standing Together with Juristac” in black and red letters, and beside her, a larger banner emblazoned with an outstretched eagle and the words “Protect Juristac” rippled in the hot breeze.

“I’m involved because it’s not right to take away where our ancestors were,” Roxanne said in an interview with Harker Aquila. “As [an Amah Mutsun] youth, it is our responsibility to make sure Juristac is protected.”

The Amah Mutsun have traditionally held the Bighead ceremony honoring Kuksui at Juristac, also known as “place of the Bighead.”

Although they still hold healing rituals and prayer ceremonies there, they are not one of the shareholders who own the land.

During the late 18th to early 20th centuries, Spanish colonizers forcibly removed the Amah Mutsun people from Juristac and nearby areas and relocated them to Missions San Juan Bautista and Santa Cruz. While an 1891 act granted land to some California tribes, the federal government did not recognize the Amah Mutsun as a tribe and did not return Juristac or any other land to them.

Currently, the Debt Acquisition Company of America is the majority shareholder of Sargent Ranch. The shareholders hired the Palo Alto development company Freeman Associates to manage the land and oversee the mining permit process.

According to Freeman Associates CEO Verne Freeman, the unique geological characteristics of the land make it an ideal location for a sand mine. While Sargent Ranch’s sand deposits originated near rivers, movement of the Sargent fault has transported the sand over 400 feet away from water over time.

“Most sand and gravel that is harvested today is harvested from river and creek beds. That has big impacts on fish and water quality, so it’s really nice to find an inland sand deposit because you don’t have to dig into rivers and streams,” Freeman said in a phone interview with Harker Aquila. “From an environmental standpoint, I think that’s a really significant fact.”

In order for the current landowners to begin construction of the quarry, the Department of Planning and Development must create an Environmental Impact Report (EIR), which is projected to be completed in October. The report assesses the environmental effects of the project, as well as the cultural resources of the land.

According to the project description submitted to the county, the quarry would not disturb any river ecosystems and would create up to 20 union jobs. Freeman also stated that the quarry would help the environment by reducing transportation distances of sand and gravel to the county, thereby cutting greenhouse gas emissions by two-thirds. Currently, most of the sand used in Silicon Valley construction projects is shipped from British Columbia.

A coalition of environmental groups, including the Committee for Green Foothills and the Center for Biological Diversity, made an offer to buy the entire 6,500-acre property. The landowners refused to sell.

“[The landowners] can certainly protect and preserve this land forever by selling it now for a fair market value,” Khalsa added.

The environmental coalition advocates that quarry operations would disrupt the migration of threatened species like the tiger salamander and the burrowing owl, as well as other species that use the area as a corridor into and out of the Santa Cruz mountains. They also warn that, unlike what the developers have said, runoff from the quarry will contaminate nearby water sources, like Pajaro River, Sargent Creek and Tar Springs Creek.

“We believe that Creator [the Amah Mutsuns’ god] put us on this earth to take care of it, not to destroy it, not to dig it up and harm it,” Eleanor Castro, a member of the Amah Mutsun’s governing council, said in an interview with Harker Aquila. “Our goal is to try to keep it pristine and save Mother Earth for everyone.”

Natasha Yen, vice president of Harker’s Green Team, agreed with the environmental groups and the Amah Mutsun that the quarry construction would harm the land.

“Our lands need protecting now more than ever. We shouldn’t allow more companies to take advantage of Earth’s resources,” she said. “Not only that, but [the quarry] is destroying more Native lands. Haven’t we done enough of that?”

Under the California Surface Mining and Reclamation Act, all mining operations must restore the land to its original state after mining processes have been completed. As part of their permit application, the owners of Sargent Ranch included a plan for reclaiming the land after 32 years of use.

“A mining operation is pretty invasive,” Rob Eastwood, Principal Planner of the county’s Department of Planning and Development, said in a phone interview with Harker Aquila. “They can go down several hundred feet, and they often move a lot of non-mineral material out of the way. It’s hard but not impossible to restore it to the way it was.”

As part of the EIR, the Department of Planning and Development has hired ethnographers to talk with members of the Amah Mutsun and determine what aspects of Sargent Ranch are important tribal resources. The exact definition of a tribal resource remains unclear. According to Eastwood, representatives of the Amah Mutsun distinguished some physical resources, like evidence of past habitation, and some “non-tangible” spiritual resources not tied to any physical objects during the consultation.

“It turns out we’re one of the first counties and jurisdictions to really do this tribal resource analysis,” Eastwood said. “It’s kind of a guinea pig case. When we got into it, we tried to look for examples of how other jurisdictions have done this tribal consultation, and it just didn’t exist.”

While California law AB 52 mandates that planners consult with indigenous tribes before proceeding with development projects, several building operations have taken place on Native American sites in the Bay Area. For example, Santa Clara County allowed solar panels to be built on Ohlone burial grounds near Guadalupe Parkway in August 2016. The Ohlone tribe traces its ancestry throughout the Bay Area, including the location of the Harker upper school.

According to Freeman, the owners of Sargent Ranch have offered to sell part of the land to the Amah Mutsun, which the tribal band refused. The Amah Mutsun believe that any disruption of their sacred ground will destroy its spiritual integrity.

“Native American spirituality has never been respected or appreciated or understood or valued,” Valentin Lopez, chair of the Amah Mutsun tribal band, said in an interview with Harker Aquila. “Why are federally unrecognized tribes the only ones whose sacred sites can be destroyed like this? We are not going to allow that anymore.”

Indigenous groups throughout the Bay Area stand in solidarity with the Amah Mutsun people’s fight to protect their spirituality. Corina Cihuachilla Herrara-Lorraine, a member of the Calpulli Tonalehqueh Aztec group in San Jose, spoke at the opening ceremony of the Sept. 8 walk about the widespread implications of the protest.

“This movement is something that’s going to affect us all, and we’re standing with indigenous people of all nations across the Americas,” Herrara-Lorraine said in an interview with Harker Aquila. “It’s important for Mother Earth. We need to speak up.”

Senior Vishnu Jaisim empathized with the Amah Mutsuns’ fight for Juristac, relating their protests to a global struggle to protect cultural sites from being destroyed by development. He believes that sometimes economic considerations can outweigh cultural factors, but in this case, the county should hold off on the quarry until it can come to an agreement with the Amah Mutsun.

“In my parents’ hometown back in India, there’s this well that has a lot of cultural significance for them, and that should and is preserved,” Vishnu said. “If an American company is trying to build on [American] Indian land, not only are they displacing the people, they are also displacing their culture.”

The public will have 60 days to comment on the EIR when the Department of Planning and Development releases it. The county will then hold public hearings for the proposal, likely in the spring of 2020.

“Our main focus is in having a look at the environmental impact report and to write our comments on it and then be present to speak against the project at the hearings of the planning commission,” Blanca Alvarado, activist and former member of the Santa Clara County Board of Supervisors, said in an interview with Harker Aquila.

After the public hearings, the Santa Clara County Planning Commission will vote on the quarry, and the county Board of Supervisors will decide whether to proceed with the project.

“Our dream is to one day bring our own children here for the Bighead ceremony, as our ancestors did before us,” Roxanne said.