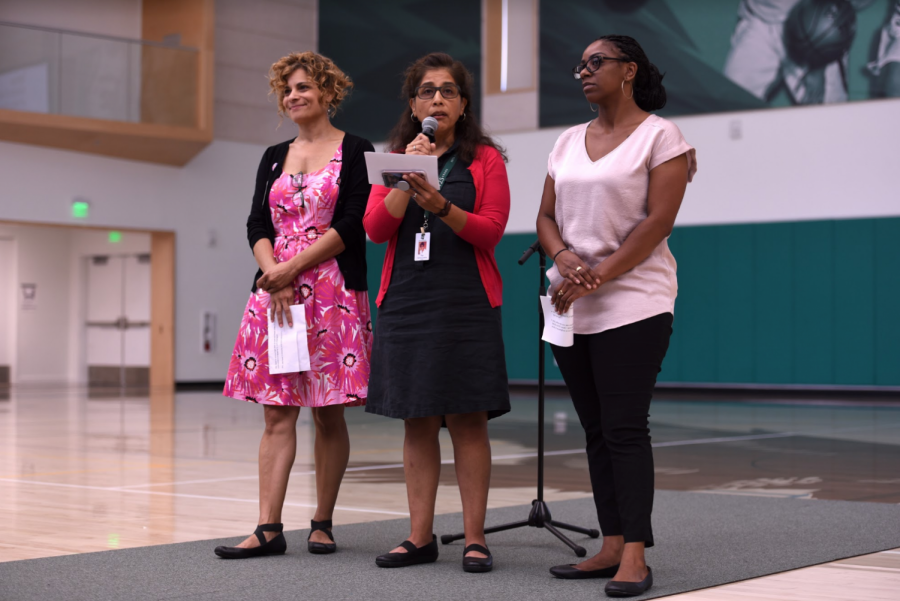 The second school meeting of the year kicked off yesterday with an announcement from National Honors Society (NHS) by NHS president Jai Bahri (12). NHS is now taking new applicants and will send an application form later in the week for sophomores, juniors and seniors who are interested. Students involved in NHS will be asked to meet a certain GPA standard, as well as a variety of community service requirements.

Following NHS, Academic Dean Kelly Horan informed students about school policy for self-studied AP tests. According to Horan, students are discouraged from self-studying APs that are offered as school classes, but students who do choose to self-study an AP exam must speak to Director of Standardized Testing and Scheduling Troy Thiele. Students who have self-studied an AP exam are also not allowed to take the corresponding AP course at the upper school after their exam.

Harker Spirit Leadership Team president Grace Hajjar (12) then announced the upcoming Spirit Kickoff, which is themed “Beach Boardwalk” this year and will take place this Friday from 3 p.m. to 5 p.m. Students will be given the opportunity to dunk their class dean or spirit coordinator at a dunk tank, among a number of other activities. Spirit officers also presented visual examples of dress code-appropriate outfits for Kickoff, and some of the clothing items that are not allowed include swimsuits and towel skirts.

Rohan Varma (11) then live-interviewed football captain Devin Keller (12) for today’s Eagle Update, asking Devin about his hopes for the upcoming season as well as his favorite memories with the football team.

Winged Post editors-in-chief Gloria Zhang (12) and Eric Fang (12) made an announcement about the release of Issue 1 as well as the Winged Post’s efforts towards campus sustainability, some of which are using compostable printing materials.

Diversity Committee faculty advisors Mark Janda, Pilar Aguero-Esparza, Dr. Lola Muldrew and Tyeshia Brown presented a preview of an upcoming assembly featuring Jay Smooth, a cultural commentator from New York City. The assembly, the first all-school assembly of the year, will be next Monday, and in anticipation of Smooth’s arrival, Diversity Committee played Smooth’s video on conversations about race, then presented definitions of a few social justice and cultural terms, including “social justice,” “equity” and “cultural appropriation.”

Finally, Anna Miner (12) delivered a presentation on the stories of 9/11, emphasizing the importance of remembrance, even among the first generation of American youth to be born after Sept. 11, 2001. Her presentation featured a video as well as a speech by U.S. history teacher Katy Rees about her 9/11 story, and Anna also announced that the following week will be dedicated to 9/11 remembrances. Bells will be rung on Sept. 11 at each of the times when a building was struck or a plane crashed, and during the advisory period on Sept. 11, students and advisors are encouraged to share their respective 9/11 stories.

ASB president Avi Gulati (12) ended the school meeting with a divergence from the traditional closing line, deciding instead to read the weather report. According to Avi, the high yesterday was 86 degrees, with a humidity of 83%.