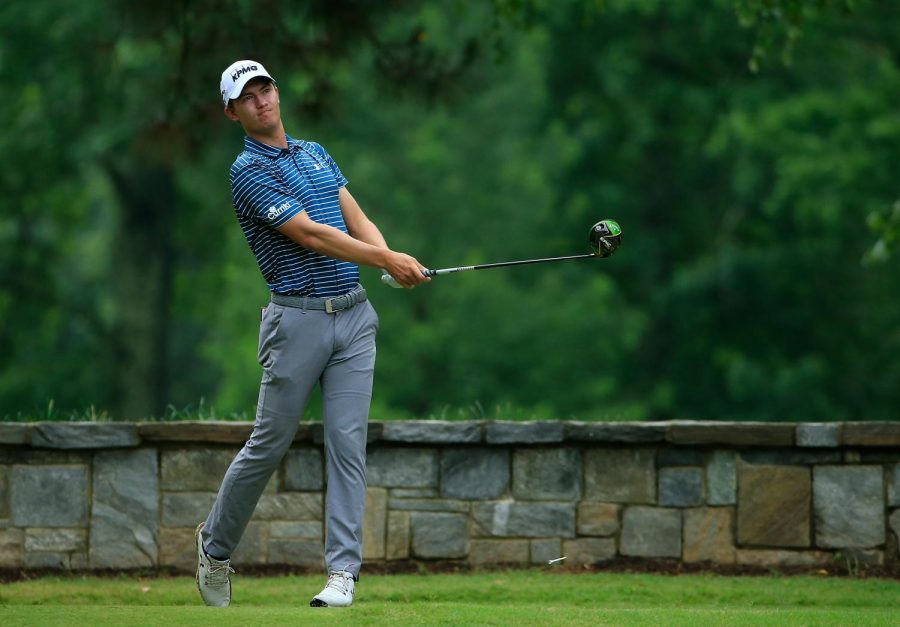 Last week, McNealy qualified for the Professional Golfers' Association (PGA) tour, in which he will start in three weeks, by finishing in the top 25.

by Sara Yen and Esha Gohil

Clad in a bright white cap, striped navy polo and slate gray pants, Harker alumnus Maverick McNealy (‘13) finishes his stroke with a determined expression, eyes cast into the distance. From the time that McNealy could walk, his father taught him how to play golf. Although he played a wide variety of sports growing up, including soccer, hockey and basketball, golf was the one that stuck.

“The team sports prepared me for my career at Stanford,” he said. “I played four years on the golf team, and I think that was a huge part of my development from being an amateur player to being able to make the jump to professional.”

Last week, McNealy qualified for the Professional Golfers’ Association (PGA) tour, in which he will start in three weeks, by finishing in the top 25. Yet, the journey leading up to his greatest accomplishment has not always been easy.

“Last year was the most challenging year I’ve had in golf,” McNealy said. “I was not playing very well and was really struggling with it, and that’s where I realized I needed to have a good reason for why I was playing professional golf.”

McNealy’s motivation to play golf stems from its innate rigor and difficulty.

“Golf tests you in a lot of ways that make you better. You have to control the way you think, you have to treat your body the right way,” he said. “Golf tests a lot of different aspects of you and your life, and I like the challenges that the sport brings me each day.”

Despite some setbacks and adversities, McNealy ultimately prevailed and transformed his weaknesses into his strengths. He decided that he needed to prioritize his health, especially during difficult seasons.

“I’ve done a lot of things better because of my struggles last year,” he said. “This season I was a lot more conscientious about my rest and made sure that I wasn’t overdoing it, especially when I got to the middle of the season, where I’m playing four out of five weeks.”

When he is not on the golf course, McNealy prefers to stay in shape by skating instead of a traditional work out. To combat damage on the body from his frequent traveling, he carries along a foam roller, lacrosse ball and a softball to massage soft tissue. One way that McNealy both takes care of his body and preserves his energy is by managing and monitoring his nutrition.

“When I’m home, one of my hobbies is cooking and making food,” he said. “I love being cognizant about what I put into my body, so that’s one of the things I like to do to get away from golf.”

With obstacles overcome in the past, success in the present and an exciting journey in the future, McNealy reflected on his growth as a golfer.

“I’m pretty happy with the way things worked out, and I’m pretty proud of the way I’ve gone about things,” he said. “I would just tell myself ‘do what you have to have done,’ which is just work really, really hard at it and try to learn as much as I can from everybody else around me. I think that’s what I did really well in high school and throughout college.”