Flame of liberty: How Hong Kong’s riots burned through the city’s economy 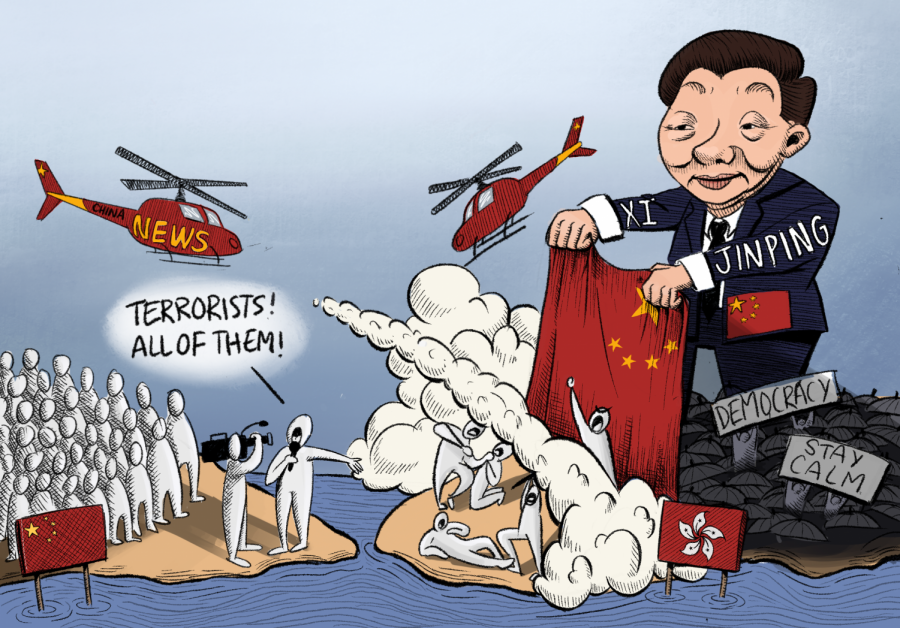 An extradition bill proposed by the Hong Kong government has led to a series of demonstrations and protests against it.

by Nina Gee and Emily Tan

It started off peaceful: hundreds of thousands of people marching the streets of Hong Kong, fighting for their right to a due democratic process and for the identity of a nation.

And then, suddenly, it took a turn for the worst. Spirits clashed, fires flew, the streets filled with tear gas and rubber bullets being unleashed on citizens. What had begun as a peaceful protest for the right to remain autonomous had become a full on riot: a near declaration of war against one of the most influential countries in our society.

In March 2019, the Fugitive Offenders and Mutual Legal Assistance in Criminal Matters Legislation, also known as the Hong Kong extradition bill, was published. That’s where the trouble began. According to the New York Times, the bill would permit China to take practically any Hongkonger into custody in the mainland, where the judges would have to follow the Communist Party’s mandates. Citizens of Hong Kong, however, are concerned that this creates a loophole for the Chinese central government to legally arrest anyone they want, with complete compliance with the Hong Kong government.

“Technically, you could be taken any time,” said Catherine Tsui, a current high school student in Hong Kong. “One of the laws basically says, if you undermine the absolute power of the Communist Party, you’ve technically committed a crime, so what we’re trying to say is that it’s very easy to exploit.”

The cynicism is not unwarranted. The relationship between Hong Kong and China has been tumultuous for most of its existence. In 199, Hong Kong, then a British colony, underwent a transfer of sovereignty, becoming Chinese special administrative region (SAR) under the Basic Law, also known as the “one country, two systems” policy, set to expire in 2047. However, having previously been a colony under democratic rule, Hong Kong has a deep-rooted hatred for the communist regime of their new owners.

“[Rioters are] very, very driven by hatred for anything mainland China. They’ve been swarming the airport. . . and they were just attacking random people who spoke Mandarin,” Catherine said. “There’s this whole fear of central China sending People’s Liberation Army into Hong Kong, and they’ve been accusing random people. They’ve been attacking anyone who speaks Chinese [Mandarin] in that airport.”

The conflict climaxed on June 5, when over a million protesters marched the streets of Hong Kong, calling for Chief Executive Carrie Lam’s resignation and garnering international attention. It further escalated on July 8, the anniversary of Hong Kong’s return to China, when protesters broke into the newly finalized Legislative Council building, smashing glass doors, breaking down barricades and vandalizing the inside of the building, according to the South China Morning Post. It was the first act of outright violence as a form of protest.

“It was chaotic,”  Catherine said. “It was not legal, for one. It was just, why would you do that? That is beyond, it was beyond what the demonstration was about at that point. It was very hard to take a stance, though, because I, honestly…it’s pretty much unheard of. Some people had a very bad reaction to how the police [were acting].”

The riots follow a pattern, too: most are led by students and jobless citizens, young people who idolize the Western values of democracy. In a way, it is a direct confrontation of the way government uses a group’s youth to discredit their protests.

“Most of these people, like I said, they’re teenagers, the teenagers who think they’ve got power, because they’ve got access to Western media,” Catherine said. “You can say this is an effect of post colonial takeover of Hong Kong… there were positive influence that colonists [have] left, and people have always been proud of that. But they’ve always worshiped Western people…like, they just think that the Western world is so liberal and the American president is so kind. They’re hoping [that] by voicing the political support of America, England, America will be there to  save [them].”

Harker upper school history and social science teacher Byron Stevens, however, posits a more positive stance on the energy of the protests.

“I was amazed, frankly,” he said. “They were able to regroup and pull back from the violent clashes that were happening at the airport a couple of weeks ago and regroup for a huge rally at Victoria Park to say, ‘The validity of what we have to say is still there and still right, but we disavow violence and we apologize for what happened, but we still demand accountability from the police and how they have treated protesters.'”

In a way, the people of Hong Kong deem Carrie Lam’s decision to even consider passing the extradition bill a betrayal.

“She passed it anyways, knowing that there would be huge backlash to what she was doing. She knew exactly how bad this would be. She knew that Hong Kong people are ready to protest,” Catherine said. “I feel like the Hong Kong citizens play into this kind of riot situation; it’s just kind of doing what [the government] want[s]. Because of the lack of reaction, addressing the issue, [it’s] definitely trying to get more protests.”

This isn’t new, however. China has long been encroaching on Hong Kong’s right to free speech and fairness. In 2016, the Chinese central government abducted five booksellers who wrote and sold books criticizing the Chinese government. Despite Hong Kong’s autonomy, China’s influence—or rather, domination—is evident in not only its foreign affairs but also its political aspirations, as seen most clearly in the puppet-like political actions of Carrie Lam.

“In terms of making Carrie Lam to resign… I don’t think Chinese government will approve that. Carrie Lam knows that too,” said a Harker alum who emigrated from China before his sophomore year. “Even now that she may not win the people’s support, Chinese government still wants her to be in control, and like that even if she wants to [resign], then she will not be able to.”

Hong Kong itself has been split up into factions: the peaceful protesters, dubbed the Wo Lei Fei; the black-clothed violent protesters; the Hong Kong police and somewhere in the middle of it, a strange third party referred to as the white-clothed mafia members.

“I know that I wouldn’t go out at night, wearing a black shirt, in fear of being beaten by gang members,” Catherine said. “These new gang members, they wear white, and they come out and basically beat anyone who’s wearing black, doesn’t matter if they’re a protester or not. They’ll beat anyone in black.”

Despite the good-natured reason of fighting for a democratic process, there is a troubling undertone to the direction the protests have turned, especially when considering the slogan of one of the various protest groups: “Bring back the glory of Hong Kong.”

“The tone has changed a little bit since the airport protests,” Stevens said. “Even something like that, closing an airport of a major hub in Asia can have so many business implications and personal, family implications beyond just, oh, I got inconvenienced and I couldn’t get where I needed to go for 12 hours. If it continues to expand, or continue without any kind of resolution, that economic impact will become more significant.”

Furthermore, China has taken to misinformation campaigns on social media in order to destabilize the movement in Hong Kong, even going as far as to cull fear of the protesters by comparing them to terrorist groups.

Despite the international support behind Hong Kong in their fight against the communist regime, the protests seem to have done significant damage to Hong Kong’s economy, with the cancellation of over 200 flights on Aug.12 and a 30-50% drop in tourists visiting stores according to Bloomberg. These protests may also taint Hong Kong’s reputation as the reliable gateway to China.

“There’s definitely a stagger in confidence in Hong Kong economics. . . people will start to question, predict whether Hong Kong can guarantee that people will remain safe, and local labor force will remain supported, whether the government will be supportive of businesses,” said the Harker alum. “It casts a shadow upon Hong Kong’s stability, which will eventually cause businesses to lose faith Hong Kong.”

As of now, Carrie Lam has since pronounced the extradition bill “dead,” with no plans to revive it, thanks to the international support this movement is receiving. The protests continue, however, in the face of the bill being shelved by the Hong Kong administration.

“I think what many people might be confused [about] in the West is, well, they were protesting against the extradition bill, and that bill has been shelved…What do the protesters want? In the sense that they got what they want[ed], that law is not going into effect,” Stevens said. “But it hasn’t gone away. It’s still the same leaders with Carrie Lam in charge. . . [the Hong Kongers] see a trend that is happening and they see the subtle and not-so-subtle changes in the way they’re being governed from Beijing that wants them to say, ‘These are the limits and we’re going to stick up for them now before they’re all gone.'”

For now, Hong Kong stands as one of the primary examples of the power of activism and democracy in today’s society, especially against a system that aims to control its people.

“My personal view from the outside in is that Xi Jinping seems to be on a pathway not unlike the leaders of Hungary and Poland and Russia and dare I say the UK and the United States as well, where there’s this trend toward a different style of leadership that doesn’t tolerate dissent very well,” Stevens said.

As for Catherine, she leaves us with an ominous message about the line between the fires that fuel the creation of a new country, or the destruction of one.

“You are destroying the reputation of Hong Kong,” Catherine said. “Just damaging so many things, that when you find the democracy you’re fighting for, you realize that you’re left with a place that’s so ruined by the process of fighting for the democracy that it’s not worth it.”