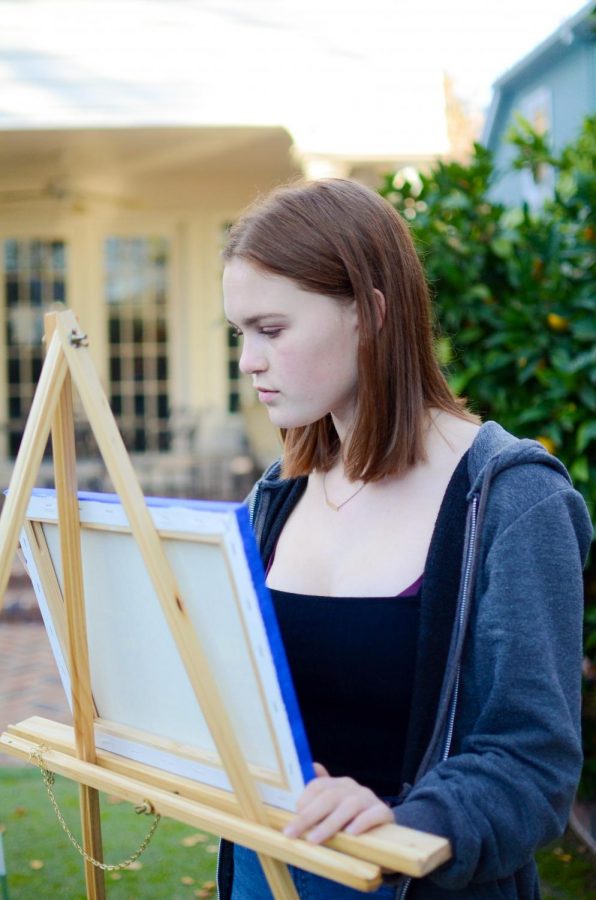 “I really like art because it relaxes me and it takes me to another place and away from all my problems. I like to paint specifically while I listen to music because it is super soothing. It’s just something I can show my creativity in my own way however I feel like. It’s a good way for me to express anything I’m feeling through a more physical way," Taylor Vaughan (12) said.

Taylor Vaughan (’19) leans over a plaster-caked table in the sculpture room, gliding an exacto-knife over red sheet paper laid atop her graduation cap. With precise movements, she traces out detailed designs.

For Taylor, art offers her a break from academic classes, and gives her a chance to use a different part of her brain, and to be more creative.

“It’s just whatever comes from your own brain it’s not anything else,” she said. “There’s not a problem or answer, there’s not even laws a meaning behind it and it’s just something that you create. It’s whatever you want it to be. “

Taylor’s concentration in AP Studio Art 3D was about the contrast between geometric and organic shapes, connected to nature and urbanization.

“Truly what it was was the forms and the ways they interact with each other,” she said. “Pieces are formed, usually I get something malleable and I don’t really have a purpose or intent, I just start making whatever comes to mind after I get a basic form.”

Art is something Taylor does for herself because she enjoys it. No expectations tie her down, and there is no real pressure for her to create anything.

“Everyone should have at least one thing they do just because [they] want to do it,” Taylor said. “That’s what art is for me.”

In contrast, cheer gives Taylor a sense of community. After working past her initial passiveness, being surrounded by and counted upon by all of her teammates has built up her confidence and given her an opportunity to grow, both as a leader and as a friend.

“I just have a better mindset as a person. I recognize that I can’t do anything, but I also recognize that I can do more than nothing. I recognize that the things I can’t do aren’t impossible– I just have to work on [them]. That’s just in the cheer context but I’ve been able to expand that to my life,” Taylor said. “Growth and self evaluation, comparing yourself to others in a healthy way and learning from others rather than just being jealous of them [are all things I’ve learned through cheer].”

Through cheer, Taylor has also had the chance to develop leadership skills, and learn to interact with her teammates and speak up more.

“At first I was really unsure of whether I was capable of having such a huge role on the team,” she said. “After a little bit I realized that I am capable of doing it. I think it’s important to be a role model even if you’re not given a position. It was a continuation of that “

Whenever Taylor needs help, however, she can turn to one of the constants in her life: her friends, who, according to her, believe in her more than she herself does. Taylor knows she can rely on them no matter what.

“She’s gotten so much more confident and it’s really evident how she presents herself,” Cameron Zell (’19), one of Taylor’s friends, said. “She’s always thinking of others, always willing to step in and help in any way possible. whenever she’s needed, she’s there and I appreciate that so much. she’s loyal and incredibly thoughtful and I’m really grateful to her for being in my life.”

Ultimately, Taylor believes that the greatest challenge she has faced was her own self journey.

“I feel that I’ve just gained so much confidence in my own abilities,” Taylor said. “That’s made me more expressive, and a better person. I believe in what I’m saying and what I’m doing,. I never fully believed that I could do things that I had never done before. Learning new things, doing these new things, seemed really impossible, really scary before.”