Humans of Harker: A helping hand

Anjay Saklecha focuses on supporting others 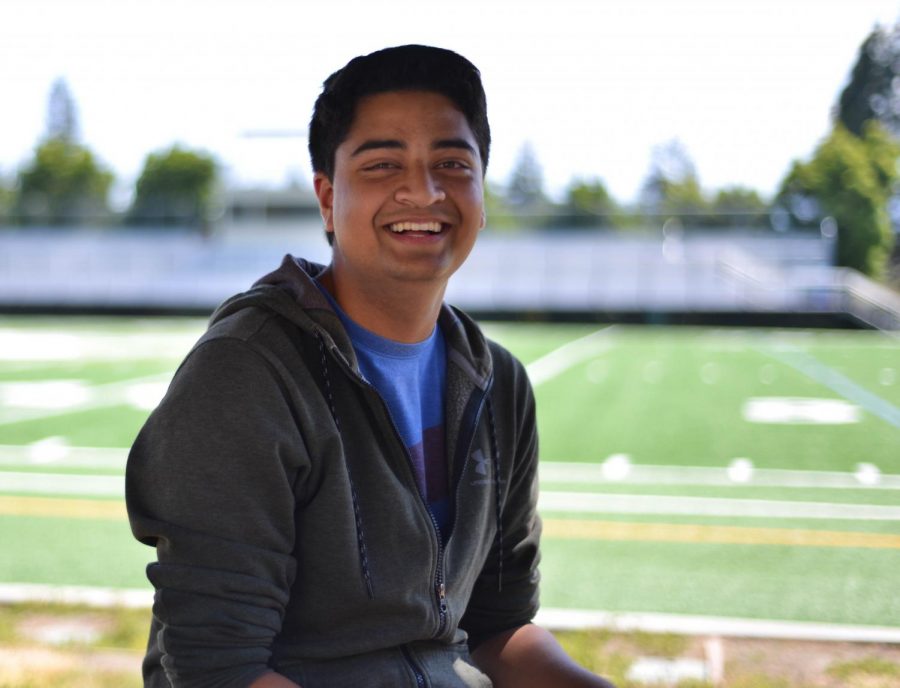 “I would describe myself as a mix of Midwestern values with the Silicon Valley spirit. Grounded, hardworking, always trying to lend a helping hand. In high school, all those things flourished and led me to run for Student Council, join journalism, dance, play tennis and express my opinions while trying to support others along the way,” Anjay Saklecha (12) said.

Surrounded by a group of friends, Anjay Saklecha (12) can often be found laughing and relaxing on the couches in Shah Hall. Always accompanied by a twinkle in his eye, his smile — wide, playful and somewhat goofy — seems a natural fit on his face.

“At least as a freshman, I used to refer to him and a couple of the other boys as my puppies because they would basically tumble over each other for 30 minutes,” upper school math teacher and Anjay’s advisor Anthony Silk said. “In a lot of ways, he has not [changed]. He is just as eager and just as excited as he was as a freshman. That part of him, that exuberance, is still there.”

Anjay pairs his humorous nature with a strict “no judgement” policy toward his friends. He strives to be someone his friends trust and confide in.

“He’s a really goofy guy, but when it comes down to serious stuff, he’ll be very very serious,” longtime friend Gene Wang (12) said. “No matter what he’s going through, he’ll always be the first one to check on you and make sure you’re doing okay.”

Anjay’s supportive nature extends to everything he does, whether it be serving as the vice president for the senior class or volunteering at the rehabilitation program at El Camino hospital. Often, the simple act of making patients smile, by performing magic tricks or playing board games with them, serves as powerful inspiration.

“Just seeing them laugh and seeing them happy for once in the three weeks they’ve stayed there, it’s huge,” Anjay said.

As the lead volunteer, Anjay instituted a “Connect with Care” program where volunteers periodically check on discharged patients in order to combat isolation issues.

“You see all these elderly people get discharged or leave from the hospital and they have no support system out of that, they have no family members, they don’t really have anybody,” Anjay said.

As an aspiring medical professional, Anjay’s engagement in the field extends beyond volunteering. His fascination with science exhibits itself in perhaps his greatest passion–research. Since he was in eighth grade, Anjay has been systematically working through different diseases with one common aspect: saliva. After a visit to the ER due to dehydration in middle school, he realized that there was potential for a less invasive, cheaper method of diagnosis.

“When I was in the ER, the huge thing I noticed was the amount of IV bags they poked in me and the blood tests they had to take from me, and I realized that there must be some easier way to make the diagnosis. That’s how we got started on the track of saliva,” Anjay said.

Working with research partner Krish Kapadia (12) for four years, the two have competed internationally multiple times for their projects.

“After spending four years doing similar topics, we’ve been coined the term ‘saliva brothers’ because we always have this interchange where he would speak and I would just magically pick up,” Krish said. “The judges would always remark ‘you guys speak like you’ve known each other all your life.’”

Through pulling all-nighters to finish projects and winning awards, research has provided Anjay an opportunity to share his work and findings.

“At the international competition, we can present this to international students from places like Brazil, who’ve never heard of this type of stuff but know about concussions and know about traumatic brain injuries and can see the applicability that saliva has over that,” Anjay said. “That’s really been the best part of this, the communication.”

Beyond research, whether it be dance, journalism or tennis, Anjay brings the same attitude of dedication and supportiveness. Moving from Akron, Ohio when he was 10, Anjay credits his values to the places he was brought up.

“I would describe myself as a mix of Midwestern values with the Silicon Valley spirit. Grounded, hardworking, always trying to lend a helping hand. In high school, all those things flourished and led me to run for Student Council, join journalism, dance, play tennis and express my opinions while trying to support others along the way,” Anjay said.