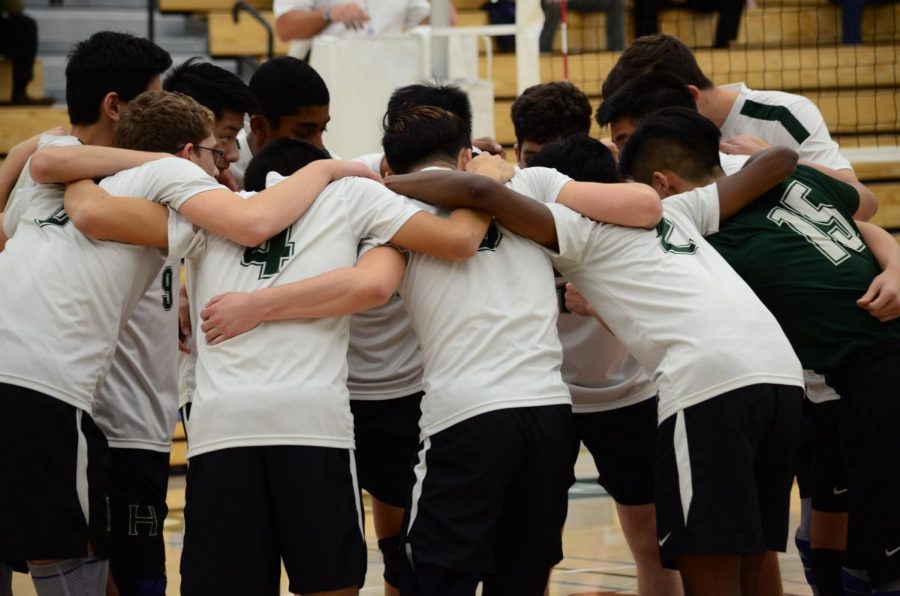 After a close three sets, the varsity boys volleyball team defeated Northgate High School 25-20, 26-24, 25-13 in the first round of Division 1 NorCal Championships on Tuesday, qualifying to play in the semifinals on Thursday.

Head coach Chad Gordon credited the team’s consistency as one of the factors that culminated in a win.

“We stayed within ourselves, and we played the way that we wanted to play,” Gordon said. “We were certainly more successful, and I thought we stayed steady as the match went on: we served and passed really well, and I thought we did a good job.”

The first set began with neither team taking a clear lead, the score evenly matched until it reached 9-9, when Liam Bakar (11) spiked the ball, giving the Eagles a one-point lead. An impressive block by Jarrett Anderson (12) and Vance Hirota (11) improved the Eagles’ score to 15-12, and they were able to stay ahead until the end of the set, which they won 25-20.

However, Northgate was able to make a comeback in the second set, taking the lead early on and maintaining it, before a powerful hit from Jeffrey Kwan (11) finally brought the score to 16-15 in Harker’s favor. After going back and forth in several plays, the boys earned two more points after the game was tied at 24-24, ensuring their second win with a score of 26-24.

Co-captain Charlie Molin (12) acknowledged the difficulties in the second set compared to the first, but added that the team was able to overcome these challenges going into their final set.

“We had some miscommunication in the second set,” Charlie said. “We didn’t have our full effort on defense so I think that let [our opponents] come back a little bit, but in the end, we just came together as a team and won together.”

Recovering from the previous set, the Eagles were able to build up a large lead over Northgate throughout the last game. With the team repeatedly hitting powerful kills, earning multiple aces and making successful blocks, they were in control during the set, and a final hit by Jeffrey marked a 25-13 victory.

Currently boasting an overall record of 33-5, the win today is one of many accomplishments in the boys’ historic season: the team is also ranked fifth in the nation and in the state, according to the most recent update on MaxPreps, and recently won the Division 3 Central Coast Section (CCS) Championships last weekend.

Assistant coach Alexander Jones expressed his pride in the team’s achievements this season and the hard work they continue to put in during playoffs.

“We had an idea that we might be successful this year, but there have been a ton of ups and downs, and I’m just really proud of the kids,” Jones said. “Hopefully we can cap [the season] off with a couple more good matches. If we can go out and we can keep playing well, we’ll be really happy with this season, no matter what happens results-wise.”

The team now prepares to host Bellarmine College Prep in the Athletic Center on Thursday at 7 p.m. in the semifinals match, which will determine the teams competing in NorCal finals on Saturday.

“After winning CCS finals, we’re all super hyped up,” Liam added. “We’re ready to take it as far as we can in NorCals: we’re hoping to win the second round and make it to finals.”