Humans of Harker: Kindness and character 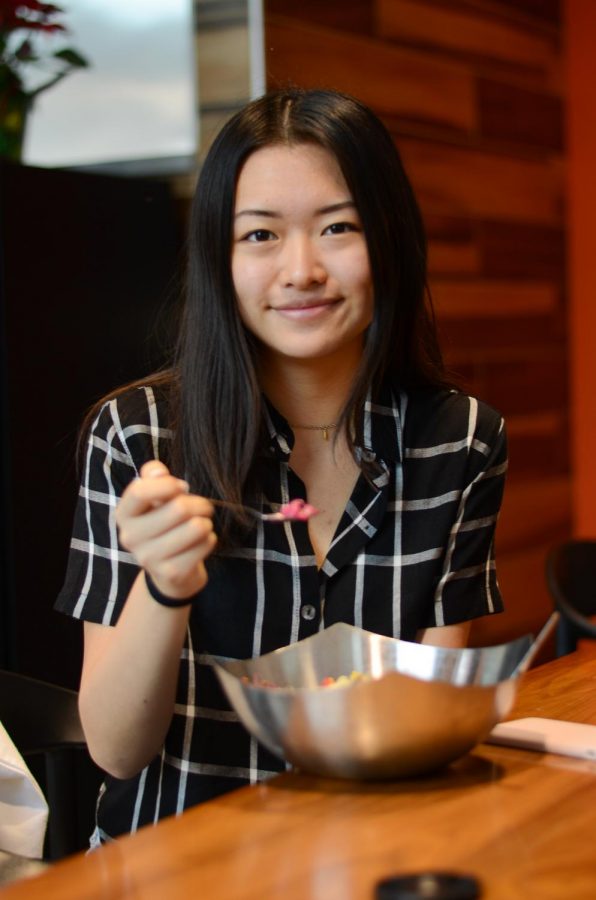 "There's something to learn from everyone. I just enjoy hearing about my friends lives and to catch up is always nice. It's important to cherish every moment you have with everyone around you," Alex Lu (12) said.

Alexandra “Alex” Lu (12) usually presents herself with a quiet demeanor. When she speaks, her words are carefully picked out, her statement and her ideas perfectly executed and communicated. But when she’s not speaking, she’s observing—and observing helps her understand.

Many of Alex’s hobbies have been dedicated to an effort to understand– to understand the lives of her peers, the struggles of the people around her and sometimes of the fictional characters she reads about in her free time.

“There’s so much out there that we don’t know, so I guess we can tap into other people’s minds through books,” she said.

As a senior who took the Graphic Narrative elective, she delved into a new world– a new kind of reading.

“Some people like to focus more on the text of it, other people more the pictures, but often times you have to go back again,” Alex said. “For me, I end up reading the text but then I go back again to connect the pictures to the text, it’s just another experience for me.”

For Alex, not only is reading an outlet to escape the real world into a fictional one, but also a carefree, relaxing way for her to learn and explore outside the classroom.

“Anything from science fiction to right now, I’m reading ‘Why Zebras Don’t Get Ulcers:’ it’s about stress in our lives,” she said. “It used to be that people got sick from the flu and stuff but now in our generation we’ve had so many developments that now it’s the slower diseases that kill us– like cancer– and stress is just one reason for that.”

Much like how reading provides a way for her to tap into her intellectual realm, her soccer career, she has found, has accomplished a similar effect.

“You actually have to think while playing. There are 11 players, and everyone’s numbered, and coaches will draw on the board who to move where and where to funnel the ball and stuff to do,” Alex said. “I guess when you’re on the field you don’t think about it that way, but it becomes second nature.”

The teamwork aspect of the game combined with its strategic thinking requirement has culminated in her love for the sport.

“There’s a lot of talking on the field: you think with everyone running to get the ball, they’d be focused on the ball. However, most people are talking to each other, [and] people are yelling stuff at you,” Alex said. “Everyone guides each other in the playing process.”

In addition to reading and soccer– which provide an intellectual outlet for her– Alex strives to understand in the public service sense as well. That’s why in her freshman year, she embarked on a career of community service with an organization aimed to help the lives of visually-impaired children.

“I started working concessions and at first, it was just making hotdogs and selling hotdogs to make money because that’s going to a good cause, but then I started meeting the children, and it became a lot more personal,” she said.

Only after interacting one-on-one with the children did she realize how much she could learn from these children.

“I was exploring San Francisco with one boy, Tristan, and we were bringing him around the doc before a Giants game where he was going to perform the Star Spangled Banner. We had a couple of hours to run around, and he was just skipping the entire time,” Alex said. “I’d always think that visually impaired people were missing something in life, but he really wasn’t. We were on this scary bridge, and we were pretty high up. He was just walking on the edge while singing.”

And after understanding, Alex is empowered to learn.

“There’s something to learn from everyone,” she said. “I just enjoy hearing about my friends lives and to catch up is always nice. It’s important to cherish every moment you have with everyone around you.”