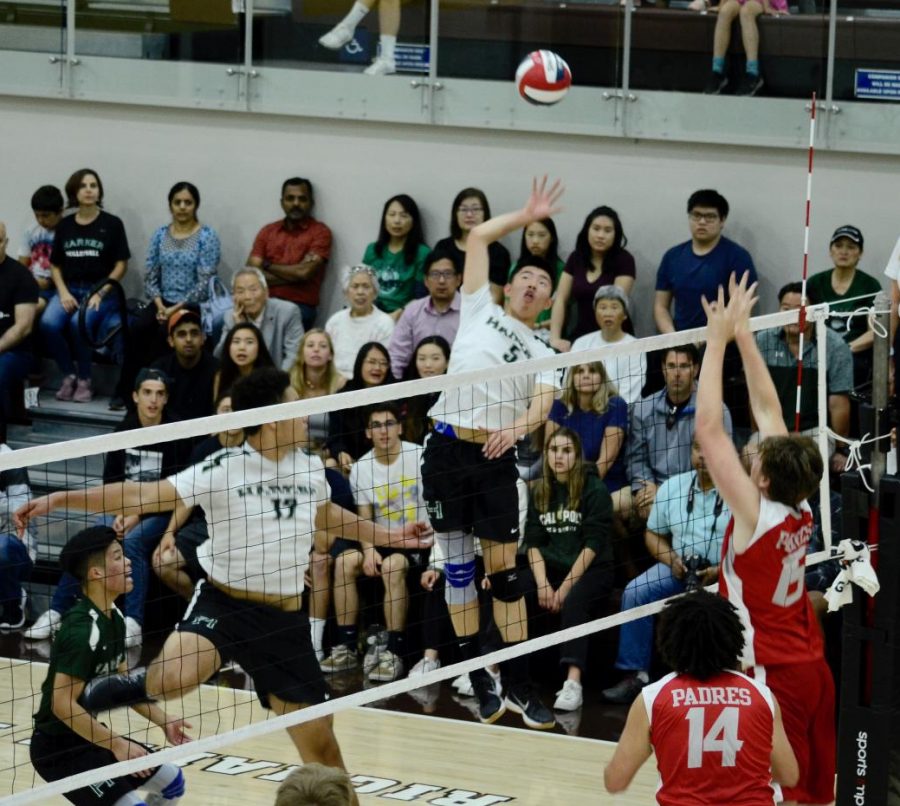 Jeffery Kwan hits the ball during the CCS championship match against the Carmel Padres. The match was held at St. Francis High School today.

“Going into the game was a little stressful because it was a rematch of last years CCS finals and we really wanted to reverse what happened last year and we wanted to do whatever it takes to make sure that we didn’t lose, especially to Carmel again in CCS finals,” libero Chris Gong (12) said.

The match was held at St. Francis High School, with several students and faculty coming out to support the Eagles. After a close first set that finally ended with Charlie Molin (12) serving two aces to clinch it 29-27, Harker was able to maintain control and finish out the match in three sets.

“Being a libero, I feel like my position lends itself to pure effort. For me, it was just a matter of making sure the ball doesn’t hit the floor all the time. It was just like I’m going to do whatever it takes to win. I’m going to hit the floor for any ball I see. If I can get to the ball, I will. If it means jumping into the stands, jumping over the bench, I will do that. It’s just like I will do whatever it takes to make sure that I know that I gave all my effort to make sure that we would win,” Chris said.

This is the first time that the boys volleyball team has ever won a CCS title, and it comes near the conclusion of a historic season for the team that saw them ranked as high as seventh in the nation.

The boys, seeded second in the NorCal regional championships, will host a first-round matchup against seventh seed Northgate at 7 p.m. in the Athletic Center. They will look to advance to the second round, where they will compete against the winner of the matchup between Bellarmine and Campolindo. The full bracket can be viewed here.