Humans of Harker: Curiosity and confidence

Clarissa Wang explores the world around her through debate 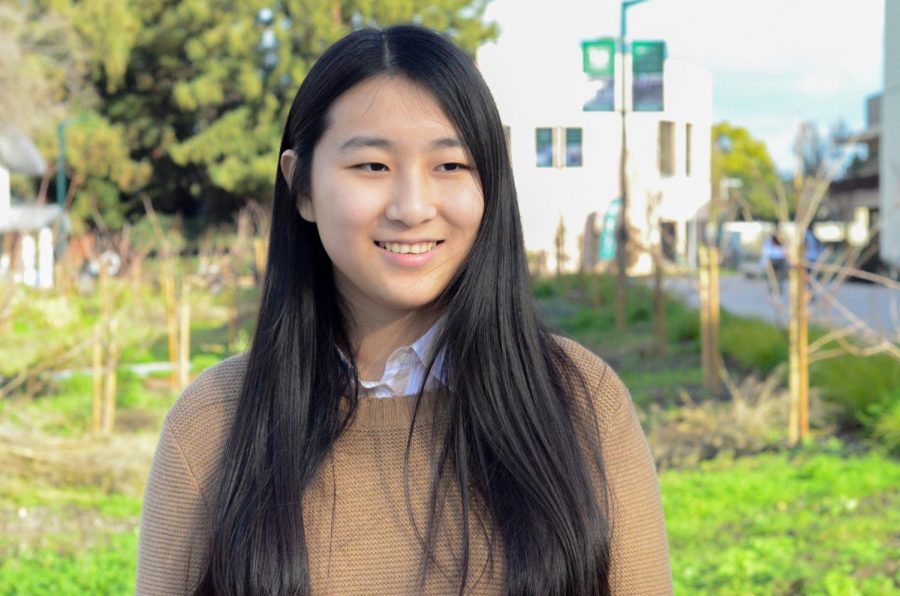 "Getting past my own head—just being confident in what I say or do—I think that’s my biggest challenge… But I find that as long as I prepare, then I’m fluent enough and confident enough to be proud of what I’m doing. When I go into the [debate] round, the nervousness fades away as I give my speech. That’s when I don’t really care who I’m debating, because I’m confident in myself," Clarissa Wang (12) said.

Standing in a brown knit sweater over a white dress shirt, Clarissa Wang (12) chooses her words carefully, speaking in an even, paced rhythm. At first glance, Clarissa in her everyday life is the epitome of calmness and modesty—a picture that contrasts starkly from the quick-witted, bold speaker that she becomes during debate tournaments.

“The disconnect between talking to her outside of class and seeing her give a debate speech is significant. It’s not that she’s not confident in her day-to-day actions, she’s just quiet,” speech and debate teacher Greg Achten said. “But in debate speeches, she’s very powerful. She really enjoys learning about and discussing the current events of the day, government policies, the impacts on citizens and society.”

As a captain of the debate team for the past two years and active debater since middle school, Clarissa invests much of her time exploring different political topics in preparation for tournaments. Over the years, debate has not only expanded her political knowledge, but also inspired a new perspective on the world.

“Debate is so hypothetical, like a little policy-making bubble, and a lot of arguments are really far fetched—really low probability and high impact—but I feel like without debate, I wouldn’t have known where to look in order to start becoming more knowledgeable about the world, and I’ve become more politically literate because of the knowledge I’ve gained,” Clarissa said.

Cindy Wang (12), Clarissa’s debate partner, notes that Clarissa dedicates much of her time delving deeply into topics that she cares about.

“She does things in moderation typically, but not with things she’s passionate about—not with lamb, not with hot pot, and certainly not with debate. She’s one of the most hard-working people I know. Our strategies have gotten way more complex than they used to be, and I particularly attribute that to Clarissa’s dedication.”

Clarissa carries her attitude of curiosity beyond debate and into all aspects of her life.

“[Clarissa] has to read a lot of articles for debate research, so she likes to go out and find other things than just what she’s researching for classes and school,” Clarissa’s close friend Ashley Jia (12) said. “She is really interested in random things—she’ll find random Reddit posts or Facebook posts and share cool facts with me, spice up my boring life.”

Beyond its influence on her worldview and potential career paths, however, debate has greatly shaped her personal growth throughout high school and helped foster her self confidence.

“And I find that as long as I prepare, then I’m fluent enough and confident enough to be proud of what I’m doing,” Clarissa said. “When I go into the round, the nervousness fades away when I give my speech. Even if I’m facing someone who’s a really strong opponent, as long as I hear their arguments and know how to respond to them—because I prepare so much—then that’s when I don’t really care who I’m debating, because I’m confident in myself.”