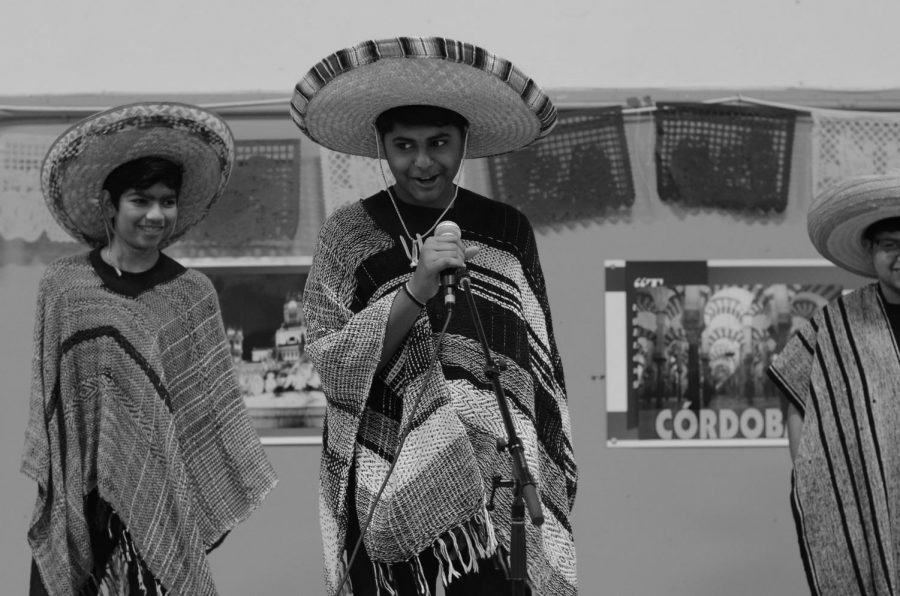 You’ve heard of them before: Junior Classical League and the four Language National Honor Societies. Each of these organizations are extremely populated in our school, but how many people really know what their purpose is?

Currently, Harker’s upper school is home to five different language organizations, representing Spanish, French, Japanese, Chinese and Latin. Each organization holds a number of students led by a team of officers and supervised by a different upper school language teacher. In order to be inducted into the societies, students must have completed the Honors 3 class of that language.

Language national honor societies provide an opportunity for students to interact with their peers who share their interests in a friendly environment. Not only do these honor societies allow teachers and students within different grades and classes to interact, they also create a channel for students to connect with and learn more about the language and its origins and further their language skills. Each society hosts meetings for its members, as well as attending and hosting various other events on and off campus, including club weeks and cultural nights.

“I think it’s really cool that there are a lot of people who share this same love for language,” Nikhil Dharmaraj, the vice-president of JCL said. “and when you are into Latin, you aren’t just into Latin, you’re into the study of languages as a whole because Latin is the root of so many different things in our world. It’s really cool to gather and celebrate this appreciation for knowledge and communication and language and all those things with a bunch of like-minded people.”

Students also have the chance to learn more about the culture behind the languages they know, and participate in events that do not appear in an ordinary classroom setting.

“My favorite part of being in FNHS is really just getting to interact with the culture and to be involved with it…” Kelly Shen (12), president of FNHS, said. “I like to stay really involved so I can continue to engage with the culture and I’m constantly learning new things through the panneaux we’re putting up or reading the articles that are written for “Sans Limite”, so it is super cool to get to see the members contributing in different ways.”

The annual French magazine, “Sans Limite” includes articles and photographs submitted by the members of FNHS. Members have certain requirements, such as completing a set number of activities, including decorating the panneaux and writing something for the magazine.

“Through ‘Sans Limite,’ which is our yearly publication, students push towards first of all exploring something that they’re interested in and then actually write a good quality article. The articles that we receive every year, we really enjoy reading [them] because they are very diverse and students really show good interest and good knowledge about the topics that they are writing about,” Galina Tchourilova, a French teacher, said.

The events hosted by these societies form a group of students who share the same passions, and a group of people who care for each other, and enjoy spending time together.

“I’ve been taking Mandarin at Harker since middle school,” Alycia Cary, a member of CNHS and the president of Chinese Culture Club, said. “but I think the most interesting part about doing it at the high school is that there is much more of a community centered around language learning and that it’s not just that you go to class and you do your workbooks and you put it your time, it’s also a community that extends itself outside of the classroom through various cultural events or food sales, sometimes, or just this general attitude that learning extends beyond the classroom and into everyday life.”

Each society has their own interesting traditions to perform as well. Dr. Shaun Jahshan, head of the Chinese National Honor Society, laughs over a fond memory of initiating new inductees.

“During the 2nd year of the mandarin program at Harker, I started the chapter.” Jahshan said. “We had 5 students eligible, and we have a tradition of presenting lucky bamboo to the new inductees, so people seem to really like their lucky bamboo.”

Jahshan also sponsors an extensive pen-pal program that the Chinese National Honor Society and their joint club, the Chinese Club, actively participate in. Whether it’s tutoring Chinese to other students or just sharing an affinity for the Chinese language and culture, members actively serve not only the Harker community, but in foreign countries as well.

“[Chinese National Honor Society] helps students who have finished Chinese as an outlet to practice Chinese and gives them a connection back to their cultural studies… It’s also recognition for students who have put a lot of effort into studying [the language]. I like the effort to reach out and be more engaged with other students around the world. I like students sharing their experience of Chinese study outside of Harker, such as cultural studies, and I like seeing students share their passion for Chinese food. I also like seeing students tutoring each other in through that program,” Jahshan said.

Of course, these societies do not only influence their members. By hosting movie screenings, cultural nights, festival celebrations, and other such events, they are able to showcase the aspects of their studied culture to the entire school community.

“I think it is a really unique way to outreach to the community and a distinctly cultural way.” Ayush Alag (12), president of SNHS, said. “It is fun that I’ve been learning Spanish for so many years and now I get to immerse myself in that culture and learn more about it and do the activities of the club.”

These organizations allow students to take initiative, gaining a deeper understanding of their language while also introducing it’s qualities to others. Yumiko Aridomi, the Japanese language teacher and JNHS advisor, has seen a shift towards student leadership year by year.

“[Students] have the opportunity to plan what they want to do.” Aridomi said. “For example our club week: whether they’ll make a sweatshirt or not, who is going to design the shirt and all kinds of responsibility and plans.”

Ultimately, these groups serve as a way for students of a language to band together and have fun diving deeper into a culture they study. It allows students to experience things that are unfeasible in a traditional classroom setting, and enjoy themselves interacting with their peers and learning more about a language they love.

“I think it is important to understand cultures that are not your own” Leon Lu (12) president of JNHS, said. “and I think, for me, Japanese was a language that I took both in middle school and high school and it was just important to me. That is why I ended up choosing to join Japanese Honor Society.”