SomiSomi creates a trendy twist on a traditional Korean dessert 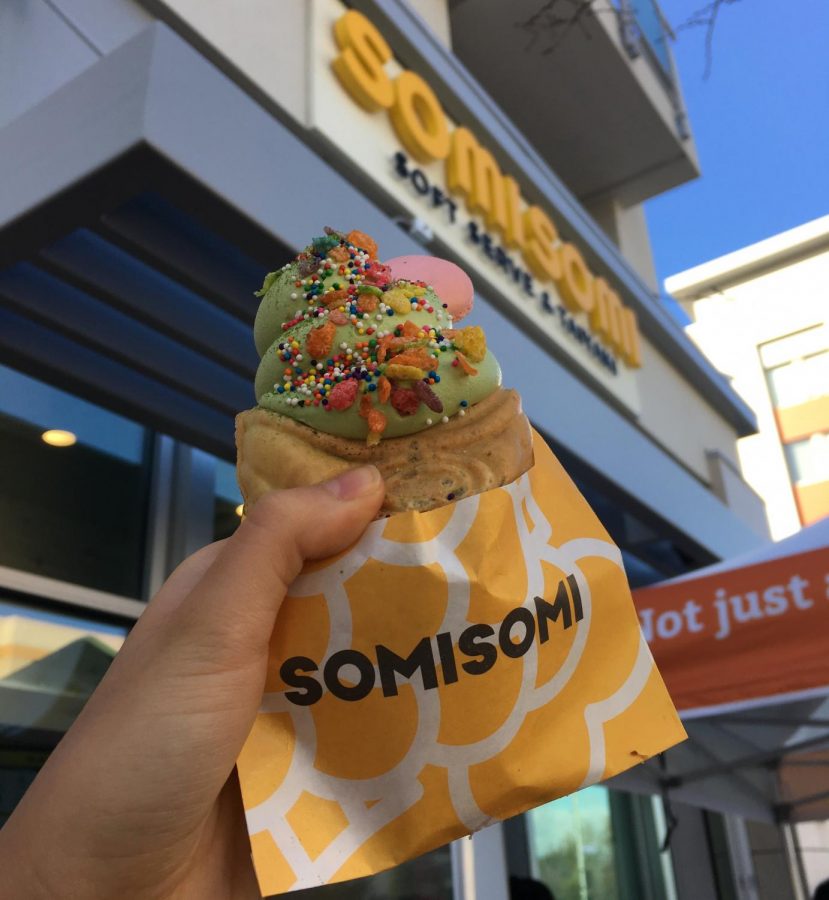 A traditional blend of flavors, the matcha and red bean Taiyaki ice cream is the perfect treat for a warm day–or even a cold one. The fruity pebbles and rainbow sprinkles provide a photo-savvy burst of color.

by Alysa Suleiman and Arely Sun

Nestled in the far corner of Cupertino Main Street Plaza, SomiSomi is a small, simple nook in a row of tall beige buildings that sells a mouthwatering treat known as taiyaki, an originally Japanese fish shaped waffle with a red bean filling. Welcoming mellow yellow letters sit far above the entrance as customers eagerly line up to the recently opened, though very popular, location.

As soon as the doors to the yellow-and-white-themed store open, the milky aroma of cream and batter hits the nose. Across from the entrance door is a gray and yellow counter lined with glass, and behind the counter sit a few television screens displaying the menu. To the left of the glass lined counter is a clean cream colored wall decorated with Instagram-able backgrounds for customers to pose with their taiyakis. Usually, popular K-pop music bounces in the background noise of the store, filling the tight space with a cheery, welcoming vibe.

Eyes swivel and mouths water as each colorfully decorated swirl is handed to a new customer. Lines usually extend far out of the entrance and the store is crammed with eager customers; therefore, there is no indoor seating, but several circular white and orange tables and chairs dot the outside sidewalk.

The waffle batter is one by one methodically squeezed from a bottle into the scalding irons imprinted with fish designs. After the employee scoops a dollop of filling based on the customers choice into the cooking waffle, the treat is then finished with another squeeze of batter that covers the filling. The iron clamps shut, spins 180 degrees to set the waffle, and moments later, the employee places each freshly made taiyaki into a thin brown cardboard box lined with parchment paper, ready to be consumed. The taiyaki shaped waffle cones, on the other hand, are carefully dumped onto a criss-crossed metal cooling tray, then carefully trimmed away of excess waffle batter on the edges.

This popular branch offers four different flavors of soft serve ice cream: milk, matcha, ube and Oreo, all packed into a fish shaped cone known as taiyaki. Fillings for the soft serve cone include red bean, taro, custard and Nutella. SomiSomi also offers an endless variety of toppings such as different types of cereal, rainbow sprinkles and Oreo or matcha powder, and they always make sure to top the aesthetic dessert with a macaron cookie or a fresh cut strawberry.

Not only can a customer order the Taiyaki and soft serve combination, in a cup or fish-shaped-cone, but also available is the original Taiyaki itself. The steaming fish shaped waffle, oozing on the inside with traditional and modern fillings, spread a smile to each customer’s face as they bite into the outside crisp of the waffle and into the soft and chewy mochi-like inside. The menu offers either a two or six waffles in a box, and each filling is customizable from the choices of Nutella, taro, custard, red bean and the addition of cheddar cheese.

The matcha ice cream in a red-bean-filled cone is a very traditional combination. The strong matcha flavor is instantly recognizable and coats the tongue in a mixture of bitter and sweet. On the other hand, the ube flavor is lighter in taste and resembles the flavor of the traditional Asian purple yam.

Both flavors are creamy, dense and impeccably smooth, and the Taiyaki cone is delectable and fluffy, contrasting the usual crunch of a traditional American waffle cone, while still remaining a crispy exterior. Utilizing a cup to hold the soft serve was far less messy than the cone as the ice cream melted through the fresh hot cone and seeped out of the paper sleeve holding the ice cream.

Overall, SomiSomi provides affordable, yet decadent Korean-Japanese desserts and integrates perfectly into the East Asian culture prominent in Main Street Cupertino. This delectable treat is perfect for a hot summer day, but just don’t let the fish make a mess!