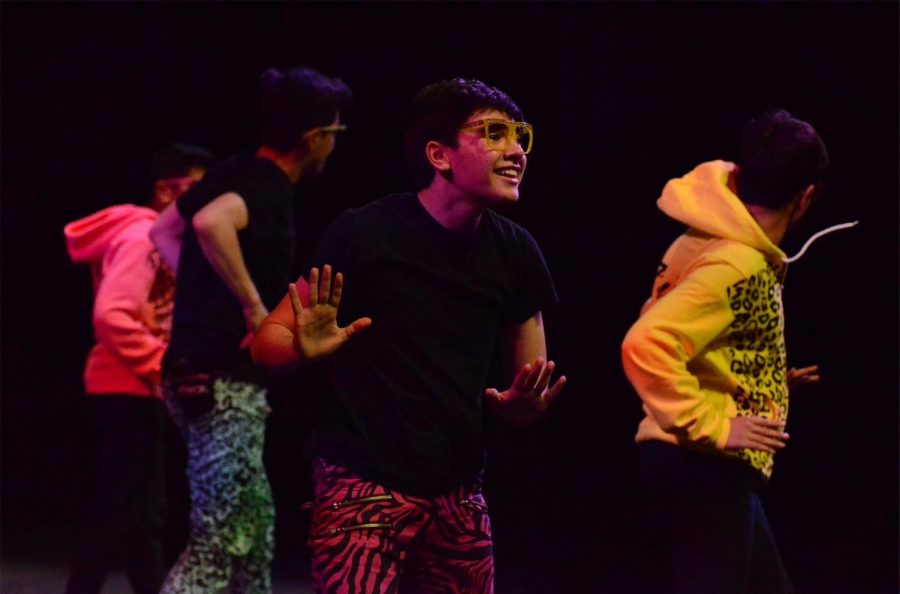 Joel Morel (11) grins at the audience as he dances in perfect coordination with his fellow members of Kinetic Krew. Kinetic Krew, an all-boys group directed by Rachelle Haun, features dancers from 9th to 12th grade.

As a medley of multicolored lights flush the stage, dancers prance into their starting positions and strike a pose. The music begins, and with a graceful turn, “Just Dance” begins.

Six dance groups from the lower, middle and upper schools joined together on the stage of the Rothschild Performing Arts Center to perform in “Just Dance” the annual spring dance showcase last Friday. Dancers performed to a variety of music, from pop to rock to ballads.

With bright smiles, Kinetic Krew, directed by Rachelle Haun, preceded the Varsity Dance Troupe, directed by Karl Kuehn, which then closed out the first round of the show. As soon as all of the dance groups had run through the program once, they returned in the same rotation once again, performing twice throughout the course of the evening.

As the performance came to a close, dancers rushed out to a mash-up of songs, group by group, to assume their spots for the finale. Audience members clapped in conjunction to the beat of the music, cheering as their favorite groups came out.

To end the night, Dance Teacher Karl Kuehn honored all of the senior dancers in the show. Calling up each senior one by one, members of Dance Fusion hugged the seniors and handed them a bouquet of flowers as the veteran dancers posed for pictures at the front of the stage.

As the seniors sat back down in their respective spots on stage, the lights dimmed, accompanied by the roaring din of the audience’s applause.