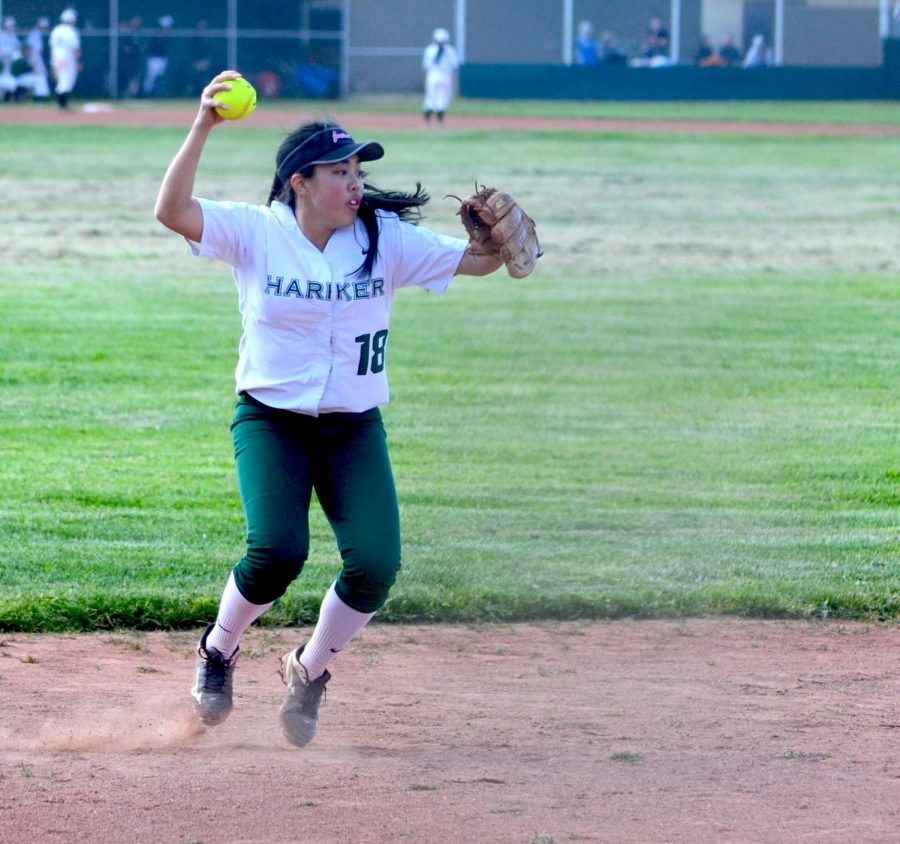 Taylor Lam (12) throws a ball to second base in a game against El Camino High. The Eagles won the game 14-11.

Softball:
The girls softball team earned their second win of their league season this week, beating Notre Dame High School 13-5 on Tuesday and increasing their record to 2-5. In a non-league game against El Camino High School on Thursday, the Eagles again won, earning a final score of 14-11 and improving their overall record to 4-7.

This week, the team hosts Gunn High School on Monday, April 15, and Palo Alto High School on Thursday, April 18, at 4:00 P.M., and plays away against Menlo-Atherton High School on Tuesday, April 16.
Baseball:
After defeating Ace Charter School 16-1 over spring break and playing two games against South San Francisco High School last week, one ending in a loss and the other in a win, the varsity baseball team now hold a league record of 5-2 and an overall record of 9-4.

Although they were up by 7 during their first match against South San Francisco on Tuesday, their opponents were able to catch up and beat them 11-10 due to a walk-off. On Thursday, the Eagles were able to redeem themselves when they played the same team, winning with a final score of 11-8.

Golf:
The golf team played in two matches last week: the varsity players competed against Sacred Heart Preparatory School on Monday and the junior varsity players against Menlo-Atherton High School on Tuesday. The team won both games with scores of 199-215 and 231-280.

“The season is going well,” assistant golf coach David Sin said. “We got a really good group, very cohesive, and we are looking forward to a big match against Menlo, which will basically decide the league champions. So we’re building up to what should be a really competitive match.”

This week, the junior varsity team plays Menlo School on Tuesday, April 16, and the varsity team plays them on Friday, April 19, for their senior night.
Lacrosse:
Maintaining their undefeated league record, the girls lacrosse team beat Mercy High School 14-5 on Tuesday and Sacred Heart Cathedral Prep 9-8 on Friday last week. They are now 5-0 in league and 8-2 overall.

Despite the close match against Sacred Heart, where the score was still tied near the final minutes, the Eagles were able to score a point and maintain their lead until the game ended. Looking forward, they hope to continue strengthening the fundamentals of the sport and gaining experience with more advanced plays to improve their overall performance.

“At at least one point, both the games [we played] were close,” Elise Mayer (12), co-captain of the team, admitted. “But we always managed to bring each other up, focus and pull through, and we will [need] this in the more challenging league games that are coming up.”

Swimming:
The Eagles had a strong showing during the match against King’s Academy on Thursday last week, which was also their senior night game, and earned several CCS qualifications.

The team also recently competed at the Palo Alto Sectional Challenge and are currently preparing for their WBAL Championship Trials, which occurs on April 25.

Tennis:
Having not played any games last week, both the boys varsity and junior varsity tennis teams prepare for their matches against Menlo School on Monday, April 15. While this game marks the end of the JV season, the varsity players also host Pinewood School on Wednesday, April 17, one of their last games before the WBAL Individual Tournament later in the month.

“When we go on the court we all support each other and give it our best, and I think that kind of environment is what makes us win matches,” freshman Joshua Tseitlin, a member of the varsity team, said. “I’m looking forward to seeing the team get closer as we play more games and also just continue the great season we are having.”

As their season draws to a close, the varsity team maintains their strong league record, currently 11-1.
Track and Field:
The track and field team earned several personal bests at the recent Bearcat Invitational this Saturday on April 13. Alexa Lowe and Andrew Chen (9) had strong performances in their 100-meter dash and long jump events, Brittney Shou (9) improved her discus throw by four feet to 64 feet and 7 inches and Zoey Rosa earned sixth and eighth in the 100-meter and 300-meter hurdle events respectively.

The Eagles compete at the WBAL Meet #3 this Tuesday, April 16.

Volleyball:
Following another win last week, the varsity boys volleyball team is currently 11-1 in league competition after beating  Mountain View High School in three sets on Wednesday. The Eagles also had a strong performance at the Bellarmine Invitational during the weekend of April 6, winning the Silver Division and finishing with a record of 5-1.

Ranked second in the Central Coast Section (CCS) and tenth in both the state and the nation, the team hopes to not only reach CCS finals, like they did last year, but to also win.

“We’re doing really well this year, continuing from last year when we made it to NorCals and CCS finals,” senior Jarrett Anderson said. “So basically this year, we’re just trying to get there again, and I’m looking forward to finishing the season strong.”

On Friday, April 19, the varsity team plays away at Saratoga High School, whom they had previously defeated 3-0 in an earlier match, while the junior varsity volleyball team’s next game will be against Los Gatos High School on April 24. The junior varsity boys currently hold a league record of 1-6 after losing to Mountain View last Wednesday.