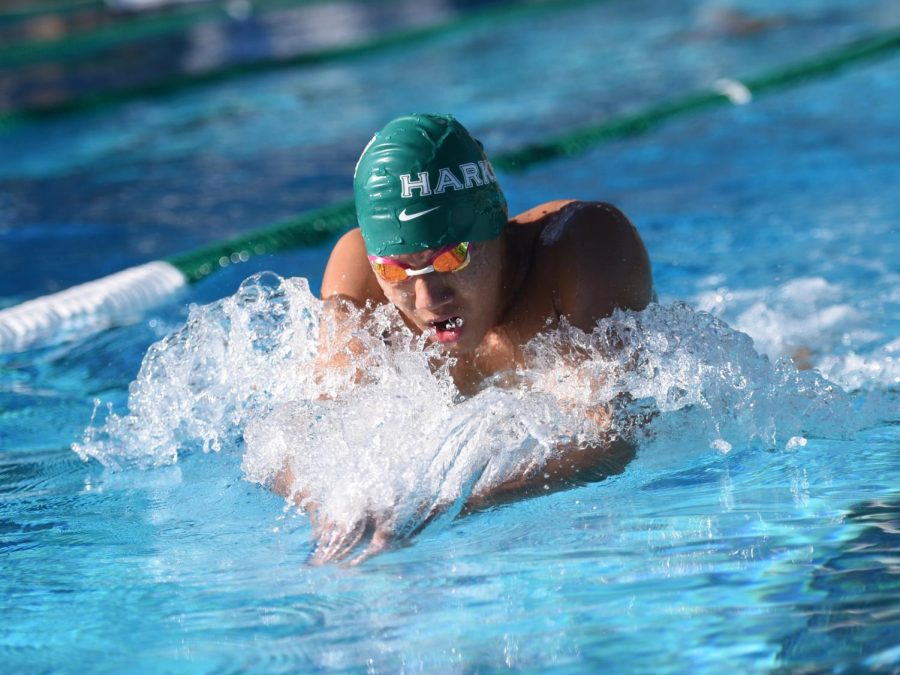 Andrew Chang (10) swims during the swim meet on Thursday. Matthew placed first in the 200 meter and 500 meter freestyle.

Baseball
After a 6-1 loss against Jefferson High School on Tuesday, Mar 12, the varsity baseball team defeated Crystal Springs Uplands 7-6 in their first league win, increasing their record to 1-1.

Despite the team giving up six unearned runs in the second inning, freshman Mark Hu pitched six innings, giving up only six hits, and Max Lee (11) hit a clutch triple, tying the game at 6-6 before Ian Williamson (10) hit a walk-off single with two outs in the seventh inning, winning the game for the team.

“We just want to get a little better, day by day, month by month,” baseball coach Mike Delfino said. “We have a pretty tough schedule this year and a lot of guys on our team are mostly freshmen and sophomores, so they’re going to have to get a lot of experience in early on.”

The team next hosts Jefferson High School again on Mar 19 at 4:00 p.m.
Golf
The varsity golf team lost 206-196 to Menlo on Tuesday after a very close game, their first loss of the season. Although they had planned to play King’s Academy on Monday, their opponents forfeited due to lack of players, and the team’s game on Friday against Granite Bay High School was canceled.

Despite these setbacks, the boys look forward to their upcoming match against Nueva on Monday, Mar 18.

Defender Emma Andrews (10) acknowledged the challenges the girls faced, with almost the whole team being injured and sick, and how the team hopes to overcome that in the future.

“After going into this game a little overconfident, I think we all learned that we need to always keep an open mind for future games,” Emma said. “We are going to lock in and focus on preparing for our league game next Friday and hopefully come out with a win.”

The girls next play away against Sequoia on Mar 22.

“I think everyone was there to have fun, and we definitely did,” swimmer Ihita Mandal (12) said. “We just want to continue trying our best and getting the best times we can.”

After this strong performance, the team continues to prepare for their upcoming meet on Thursday, Mar 21.

Tennis
The varsity tennis team played a strong game this week, winning all three of their matches and increasing their league record to 5-1: they beat King’s Academy 6-1 on Monday, Pinewood 6-1 on Tuesday and Crystal Springs Uplands 5-2 on Thursday.

“Overall the matches [this week] were good for developing ourselves as a team and improving individually as well,” Richard Hu (11), a member of the varsity tennis team, said. “The season is going pretty well, and [we hope] to maintain the energy we’re currently keeping and see how that goes in the end.”

Track and Field
The track and field team competed in their first league meet of the year on Wednesday, earning recognition in a variety of events.

The 400-meter relay team of Andrew Chen (9), Mitchell Granados (12), Anton Novikov (10) and Giovanni Rofa (11) won their race, as Anton took second in the 100-meter and 200-meter individual events. Freshman Alexa Lowe placed first in the 800-meter. Additionally, Natasha Matta (9) won her two hurdle competitions; Alexa came within one foot of the school record in her first triple jump of the year. Thrower Ayush Vyas (12) took the win for both the shot put and the discus throw.

The team next competes at the St. Francis Invitational Track Meet on Saturday, Mar 16.

The boys also placed fifth at the Best of the West Invitational in San Diego last weekend, despite initially being seeded 30th out of some of the top 32 teams on the west coast. They went 5-1, even defeating local rival Monta Vista High School before finally losing to Palisades.

“I think we have improved a lot since last year, and we’ve found a nice team dynamic,” varsity player Billy Fan (10) said. “We just hope to keep this up for the rest of the season.”

The team next will play against Los Gatos High School on Mar 20 at 6:45 p.m., following the junior varsity team’s game at 5:30.

Softball
After a tough week for girls softball, the team now maintains a 1-3 league record after losing 11-10 to Pinewood on Tuesday and 14-2 to Notre Dame-Belmont on Thursday.

Despite these losses, the girls are optimistic for the rest of the season as they approach their next home game against El Camino High School on Mar 19 at 4:00 p.m.