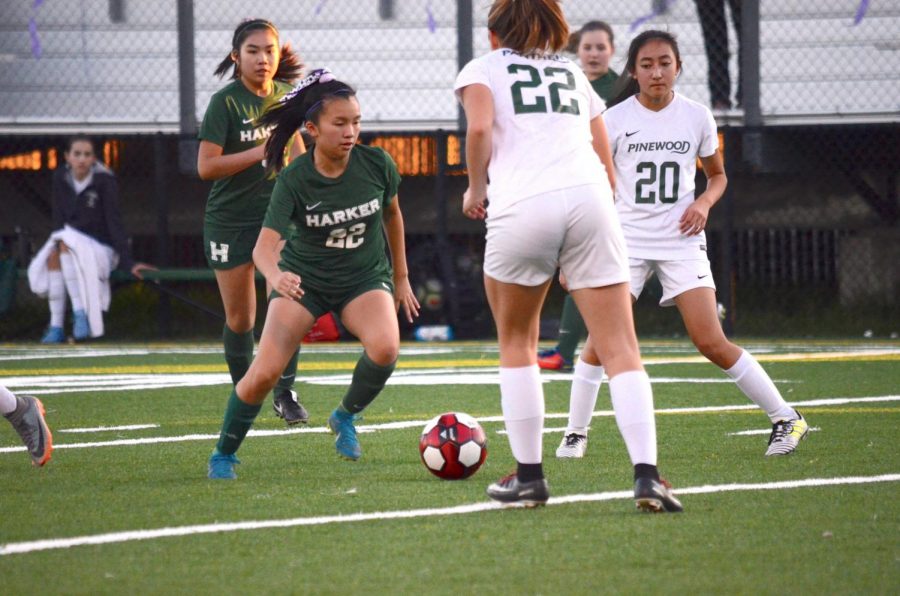 Aria Wong (10) weaves through a pair of Pinewood defenders. The varsity girls won 5-0.

Roars echo from the bleachers as the varsity girls soccer team scores yet another goal during their Kicks Against Cancer game. Smiles adorn the faces of students, parents and faculty alike as lavender balloons wave from the stands, serving as a reminder of what the teams are playing for.

Kicks Against Cancer, hosted by the Harker soccer teams on Jan. 26, is an annual schoolwide event to spread awareness and raise funds for Camp Okizu, a program which supports families affected by childhood cancer. All three soccer teams played during the event and helped sell baked goods, t-shirts, and raffle tickets to raise funds.

The varsity and junior varsity boys teams both lost their games against Menlo 1-2 and 0-4 respectively, while the girls’ team defeated Pinewood 5-0, with Megha Salvi (9) scoring two of the five goals. 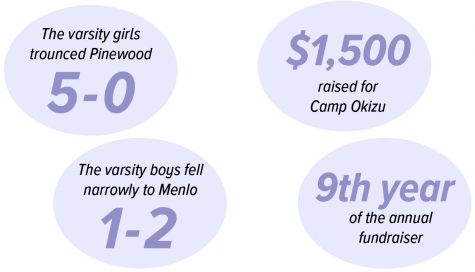 Varsity boys soccer coach Jeff Baicher acknowledged how challenging the game was, especially since Menlo scored early during the first ten minutes of the game.

“It was a difficult game—Menlo is a very good team,” Baicher admitted. “It’s sometimes a little bit like pushing a rock uphill once you give up that early goal. We had to change many things in our system, and that put us at risk.”

Despite the loss, Jeffrey Fung (11), co-captain of the varsity team, noted how proud he was to play on behalf of Camp Okizu and raise money for the families.

“[Kicks Against Cancer] is a great event, and I’m really happy to do something to support the children,” Jeffrey said. “I love the crowds and all the support we gathered, so [I had] a great time.”

The captains of both varsity soccer teams coordinated with representatives from Camp Okizu to organize a pizza party with the families of the camp on Jan. 11 in addition to Kicks Against Cancer.

“[The pizza part] was a lot of fun because you get to meet the children and you get to hear their stories,” Ria Gupta (12), co-captain of the girls varsity team, said. “It’s just great to see the cause that you’re raising money for and to do this small thing for them.”

Athletics Director Dan Molin emphasizes how Kicks Against Cancer is a strong student-run event and the administration provides a lot of behind-the-scenes support to help the soccer team with all the logistics and planning.

“We support administratively any way we can, so it’s actually a lot of work in here too, but it’s for a great cause,” Molin said. “It’s bigger than sports. “[The players] are still going to compete and try to win the actual games, but the ultimate message is wonderful.”

During halftime of the boys’ varsity game, players from both varsity teams presented a faux check of $1500 to Camp Okizu representative Julie Garrett, who works with schools and groups who want to fundraise for Okizu. She notes that the money raised by Harker will be enough to send one child to camp for a week this summer.

“We are so appreciative of your soccer team for [organizing Kicks Against Cancer],” Garrett said, speaking on behalf of Camp Okizu. “Rather than just fundraising, it’s just so nice to see the heart behind the money and to see the kids behind it and how hard they worked to do it — it’s really something else.”

This story was originally published in the pages of the Winged Post on Feb. 20, 2019.