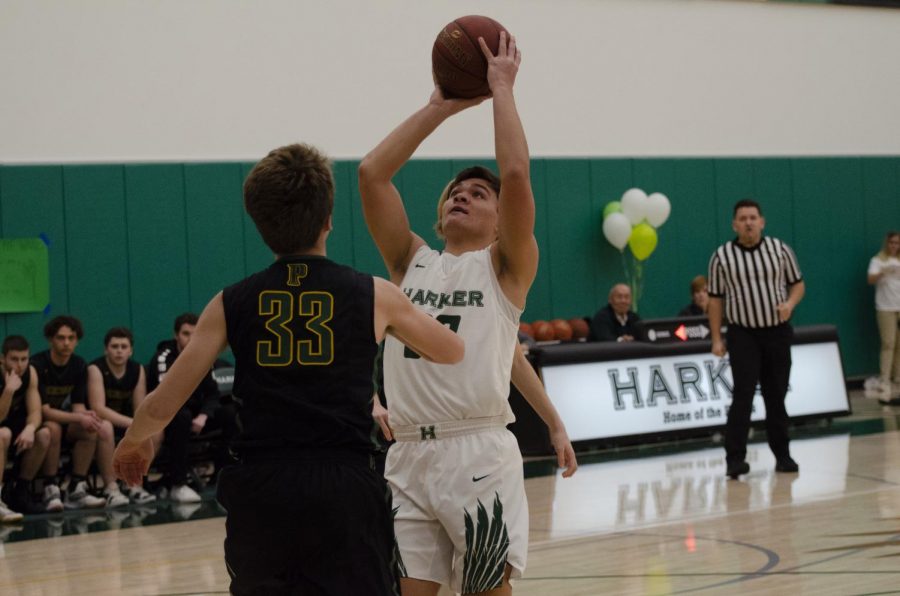 Trevor Thompson (12) attempts to score in the paint. The varsity boys basketball team beat Pinewood 77-50 during their senior night game on Feb. 12, ending the regular season with a league record of 6-8.

The varsity boys basketball team beat Pinewood 77-50 during their senior night game on Feb. 12, ending the regular season with a league record of 6-8.

Seniors Jarrett Anderson, Trevor Thompson, Gene Wang and Richard Wang were honored at the ceremony with flowers as they were accompanied by their family members to the center of the gym floor for a photo.

Sophomore Ray Wang, who helped make the decorations in the gym and the team t-shirts, admires the unique, individual impact that each senior brought to the team.

“This was [the seniors’] last home game and it’s a really important event for them, so it’s great that people could come out and support [them],” he said.

The boys held led throughout the game, with Richard scoring the Eagle’s first basket by sinking a three-pointer less than a minute after the game began.

“I think [having the whole team able to play and on the court] had a lot to do with how well we played and how hard we played,” head coach Butch Keller said. “It’s always good to win on senior night.”

The team will next play this Friday for the first round of CCS playoffs.