Allison Cartee continues stepping out of her comfort zone 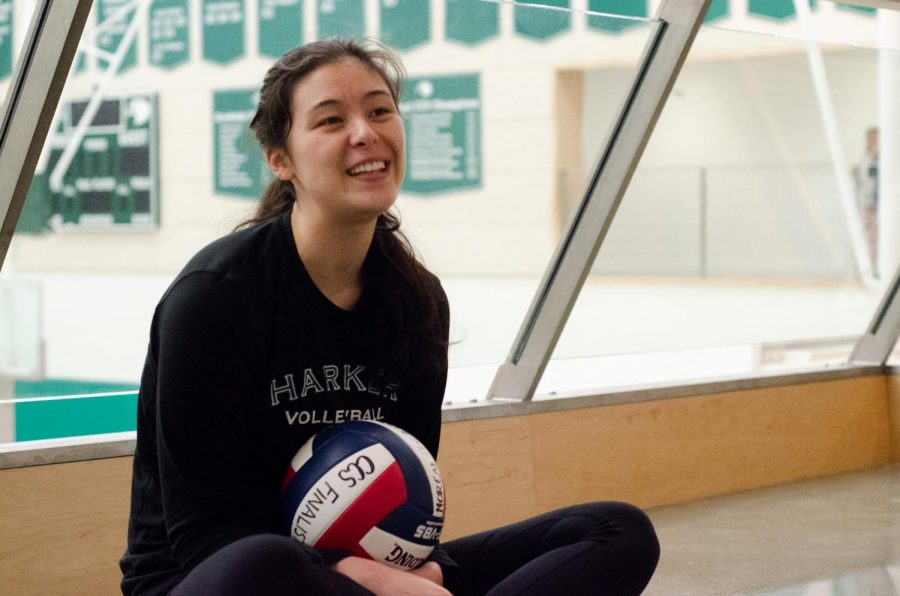 “My life quote is from 'Up,' because I'm a giant Disney fan. It's ‘Adventure is out there.’ I love 'Up' because its message reinforces that adventure, friendship and excitement don't really have an age on it, so it always pushes me to do better because I realize that. Hopefully I'll be 80 years old, and I'll still be able to push myself,” Allison Cartee (12) said.

As the ball spins up into the air, Allison Cartee (12) bounces on her toes at the ten-foot line on the volleyball court as her long ponytail sways in front of the number 12 on the back of her jersey. She jumps into her approach before swinging and slamming the ball down; players on the other side wait anxiously for the hit, but the ball hammers into the court before they can receive it, hitting the floor with a loud thunk, bouncing up ten, twenty feet into the air and winning the point for Harker. Allison turns around to her already cheering team, jumping up and down with her teammates as they convene for a group hug.

However, Allison wasn’t always a member of the varsity girls volleyball team and one of the top five players in the league for her position today, according to her coach Theresa Smith, also known as Coach “Smitty,” the lower and middle school athletic director and varsity girls volleyball coach. In elementary school, Allison said she had “absolutely no coordination,” but that her love for the sport arose once she began playing for a club team.

“It’s just so competitive. I mean, I was tall, I wanted to use that to my advantage,” she said. “I just love the feeling when I jump and sometimes, if I did more conditioning and I don’t come down as soon as I expected, it literally feels like you’re flying. I run so much quicker, I feel literally like a speed ninja when I dive for a ball. It’s just so engaging.”

In addition to the thrilling nature of the game itself, Allison’s teammates play a large role in keeping her motivated and invested in the sport.

“The people that you’re with [make it all worth it], ” she said. “When I’m trying to win, I just focus on the people I’m with, saying, ‘I want it, but they want it, so I’m going to work for them instead of me.’ Even if it means I’m on the bench, if that’s the best move to win, then I’m totally okay with that.”

Allison’s team player mindset and willingness to help her teammates, whether it be by lifting the mood by cracking a joke or by complimenting a fellow player after a good play, are well-received by her teammates, who view her with both respect and endearment.

“The rest of us really do enjoy having her. She’s always there to say something snarky, sarcastic,” said teammate Michelle Ning (10). “You can definitely feel there’s something about her that just makes her stand out through everyone else—call it an aura. She balances everything out. Whether or not everyone knows it, she’s kind of like a glue.”

Allison’s volleyball career hasn’t been without its difficulties, with her struggles to find a balance between holding herself up to a high standard and allowing herself to let go of mistakes.

“Last year in club season. . . [my coaches] really helped me overcome my sense of volleyball perfectionism,” she said. “As a Harker student, you’re supposed to get A’s, A’s, A’s, and that correlates into the volleyball world as lots of kills, lots of points, no mistakes. . . They helped me overcome that fear of making mistakes and…[putting] myself out there.”

Smitty notes that not only does Allison possess incredible volleyball skills, but that she also displays incredible strength off the court and stays true to herself.

“I have a lot of respect for Allison Cartee. She’s a very strong female, and she’s going to do amazing things moving forward,” she said. “It’s not easy to stay who you are sometimes because often times you want to be what everybody else is, and Allison doesn’t care. And I love that about her.”

Allison’s friends, teammates and coaches alike describe her as quirky, confident and unafraid. Wynter Chaverst (12) admires her open-mindedness and her ability to be ready for any challenge.

“She’s always ready for what people tend to throw at her, regardless of whether that’s good or bad,” she said. “She just has this passion for trying new things and figuring things out on her own without any experience.”

Even her life motto reflects her eagerness to step out of her comfort zone and become a better person.

“My life quote is from ‘Up,’ because I’m a giant Disney fan. It’s ‘Adventure is out there.’ I love ‘Up’ because its message reinforces that adventure, friendship and excitement don’t really have an age on it, so it always pushes me to do better because I realize that. Hopefully I’ll be 80 years old, and I’ll still be able to push myself,” Allison said.