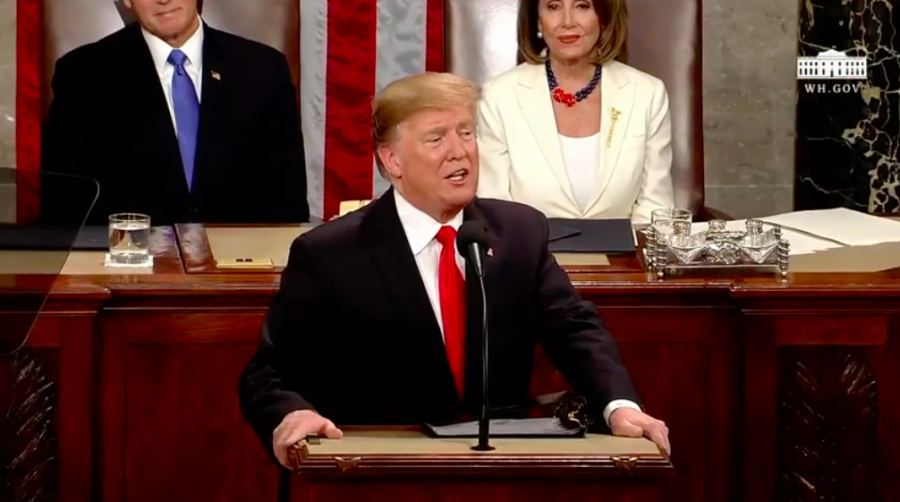 Provided by The White House

President Trump delivers the address at the House of Representatives today. Abrams gave the formal response after the president's address.

by Kathy Fang and Nicole Chen

President Donald Trump delivered the State of the Union Address in the House of Representatives tonight, using the speech– which was expected to encourage compromise after a week-long delay due to a tense, 35-day-long government shutdown– to boast American economic growth and emphasize American “greatness.”

Former Georgia House Minority Leader Stacey Abrams then gave the official response to the State of the Union minutes after Trump’s speech. Abrams’ speech opened with a personal anecdote about her family background before she moved on to touch upon national issues that were missing from Trump’s speech, ending on a note of unity that reaffirmed the Democratic Party’s values and stood in stark contrast to the mixed message of Trump’s speech.

Trump began the address by speaking about America’s “unprecedented economic boom,” claiming 5.3 million new jobs, the lowest unemployment in over half a century, rising wages and tax cuts for working families. He touted the accomplishments of his administration, spending much of the first quarter of the speech elaborating on American economic and militarial preeminence globally and the two major bipartisan initiatives passed in the past two years—VA reform and criminal justice reform.

While boasting of what he called “the hottest economy anywhere in the world,” Trump rebuked the ongoing federal investigations, blaming them for potentially holding back American economic growth.

“The only thing that can stop it are foolish wars, politics, or ridiculous partisan investigations,” Trump said in his speech tonight.

Trump then addressed the government standoff between Congressional Democrats and supporters of the president’s funding proposal over border security and a southern border wall, reminding Congress of the approaching Feb. 15 deadline for another spending bill. He did not address any proposals to provide back pay to federal workers who were furloughed as a result of the shutdown.

Trump also emphatically described the threat of illegal immigration and the burden it places on American citizens, including less job opportunities, lower wages, overpopulated schools and hospitals and illegal lethal drug use. He reaffirmed his support for the wall on the southern border and his pledge to never abolish U.S. Immigration and Customs Enforcement (ICE), a declaration that was met with applause from the Republican side of the chamber.

He recognized the historic number of women in Congress and the workforce, which earned enthusiastic applause from both sides of the chamber. Trump’s speech then moved farther from expectations of a unifying message to discuss controversial issues of abortion, protectionist trade policies, defense spending and his plan to begin withdrawing troops from Afghanistan. He also confirmed a summit meeting with North Korean leader Kim Jong Un, which will be held at the end of the month.

Multiple instances of partisan divides erupted during the presidential address as Republicans applauded and even cheered on Trump’s policies, drawing a sharp contrast with the Democratic half of the chamber, which was most notably marked by the group of female Congresswomen dressed in white, the same color that is often associated with the early nineteenth century suffrage movement.

Moments of bipartisanship ensued following the stories of some of the president’s guests, which include Grace Eline, a ten-year-old survivor of brain cancer; Alice Johnson, a newly released prisoner convicted of drug trafficking; and veterans and survivors of World War II, whom Trump honored in observance of the 75th-year anniversary of the D-Day Normandy landings. Trump then closed his speech on a note of unity and inspiration, which was met with a standing ovation from both sides of the chamber.

“I am asking you to choose greatness. No matter the trials we face, no matter the challenges to come, we must go forward together. We must keep America first in our hearts. We must keep freedom alive in our souls, and we must always keep faith in America’s destiny, that one nation, under God, must be the hope and the promise and the light and the glory among all the nations of the world.”

Following Trump’s address, Abrams celebrated the beauty of the American belief in community before criticizing the recent government shutdown as a “political disgrace” and mentioning her work volunteering to provide food for furloughed workers. She established her support for gun safety measures, educational loans, expansion of healthcare and the fight against voter suppression.

“American wins by fighting for our shared values against all enemies, foreign and domestic,” Abrams said in her speech. “That is who we are and when we do so, never wavering, the state of our union will always be strong.”