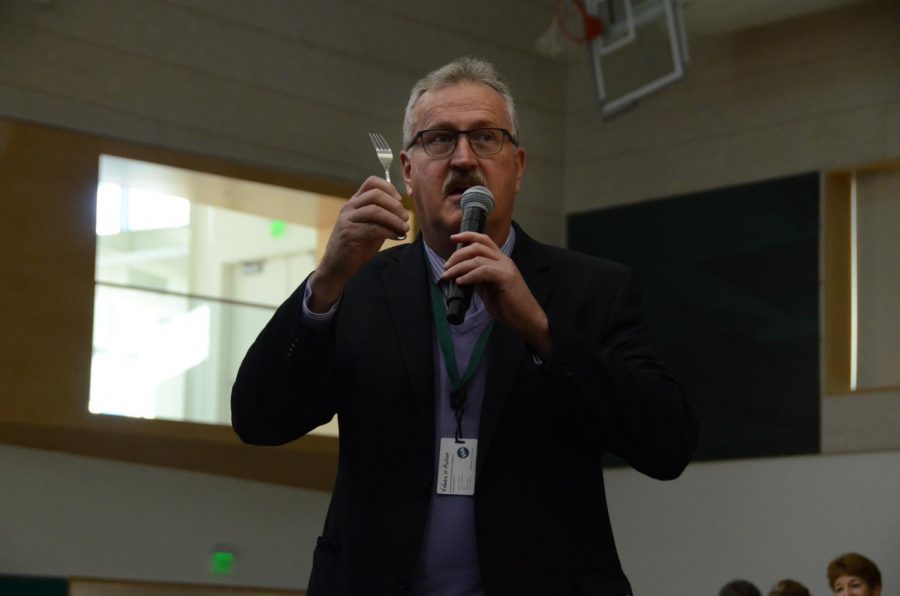 Greg Lawson gestures with a fork to illustrate the importance of putting metal utensils in bins where they will be washed, not throwing them in the trash or on the ground.

As students scuffled through the bleachers to find their seats at the 2nd to last school meeting before Winter Break, Matthew Hajjar (12) opened with a stentorian chant as Adhya Hoskote (11) and Grace Hajjar (11) took the mic and went over the Eagle Update.

Arthur Jakobsson (10) talked about the end of Robotics’ first season, announcing the beginning of the next season on Jan. 5. The robotics team placed well at the last two competitions they competed in.

The Model UN officer team then announced their Berkeley tournament from March 1 to 3 and their New York tournament from March 5 to 9. They held an intro session on March 5 at 1 p.m. in history teacher Carol Green’s room along with a discussion about the Global Migrant Crisis. Any questions can be sent to [email protected]

Shania Wang (12), ASB Vice President, announced the Arrive Alive simulator, which was brought to Harker on Dec. 5, featuring 2 minute simulations which taught students the importance of drinking sober and fully focused on the road.

Performing Arts continued the meeting with an announcement about Downbeat’s Holiday Tour on Dec. 7, with a final performance at the Fairmont at 8:30 p.m.

Prameela Kottapalli (12) and Kat Zhang (12), the editors-in-chief of the Winged Post, informed the student body of the redesign of the paper. Both content and formatting redesign was undertaken, and student-based focus groups will soon be asked to offer feedback on both the Winged Post and Harker Aquila.

Spirit announced a Christmas tree decoration contest, which took place from Dec. 3 to 7, with the week closing with a gingerbread house contest on Dec. 7 during lunch in Manzanita Hall. Spirit also announced the Harker Snow Day, inviting students to Harker’s annual ski trip open to skiers of all levels. The trip will be in Tahoe on Feb. 9.

Nearing the end of the meeting, Andrea Simonian (12) spoke of the devastation of the Camp Fire and announced that all proceeds from the Snack Bar in December would go to Northern California wildfire relief. Any gift card or other donations can be dropped off in community service director Kerry Enzensperger’s room or journalism teacher Ellen Austin’s room.

Arjun Kilaru (12) closed the meeting with an announcement about a school-wide “While Elephant” held before finals.