The potential of Hydrogen 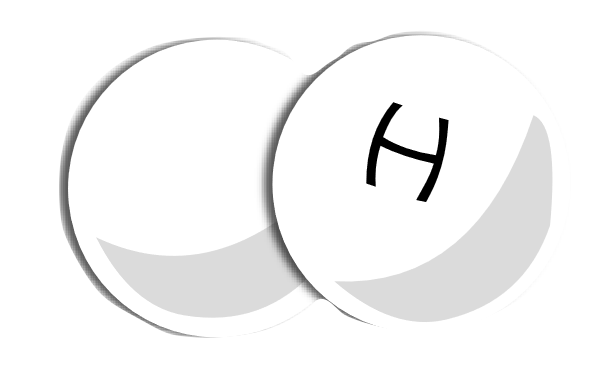 A rendition of an H2 molecule of the hydrogen gas used in fuel cells.

by Sara Yen and Jessie Wang

According to the Union of Concerned Scientists, transportation, mainly cars and trucks, constitutes almost 30 percent of all global warming emissions in America. When discussing alternative zero emission energy sources, most people might first think of wind or solar power, but there’s a new source on the block: the hydrogen fuel cell.

Hydrogen enters the fuel cell on a cathode, a conductor of electricity, where electrons are stripped from the hydrogen particles. This stream of electrons create the current, which then flows in an external circuit. 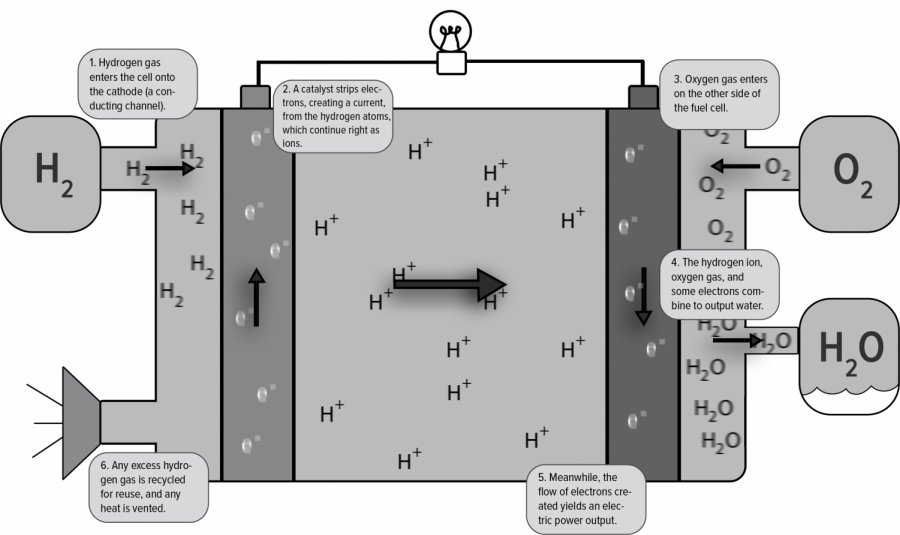 The only byproducts of this process are water and heat, meaning no greenhouse gases are emitted. Unlike solar and wind energy, which are difficult to store in the form of lithium ion batteries, hydrogen is a type of fuel, which makes storage much easier.

“Batteries do not work well as a long haul truck application because you have to carry so much payload that you need a lot of energy. [Thus,] you need more batteries, and when you have more batteries the truck weighs more, and you need more batteries to carry the batteries, and eventually you end up having a truck that’s just carrying itself.” Dr. Jack Brouwer, Director of the National Fuel Cell Research Center at UC Irvine, said. “[But for hydrogen] you can separately size the storage tank, which is actually a very light device, from the power generation device.”

Besides only being lighter, fuel cells operate much faster than electric batteries because the energy is transmitted as fuel rather than as electrons. While the fuel cell-powered 2018 Toyota Mirai can, with only five minutes of charging, drive over 300 miles, the 2018 Tesla Model 3 takes from 8.5 to 12 hours at 220V to fully charge its battery. Batteries also run the risk of degrading if charged too fast, creating additional limitations on charging time.

According to the Alternative Fuels Data Center, the cheapest and most common method of producing hydrogen is using steam to reform natural gases, which are fossil fuels mainly composed of methane, a gas formed by a carbon atom attached to four hydrogen atoms. The reaction between natural gas a 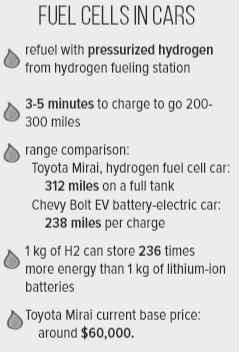 nd steam yields hydrogen from the synthesis gas created, which is composed of hydrogen, carbon monoxide and a bit of carbon dioxide. More hydrogen can be produced when carbon monoxide reacts with water.

Although the combustion of natural gases does release greenhouse gases, the emissions are still less than coal or oil, according to the Union of Concerned Scientists. Moreover, burning natural gases produces less nitrous oxides, which can react to produce smog, than gasoline does.

The implementation of hydrogen fuel cells can help address the pressing issue of climate change and global warming, which, according to a November climate assessment released by the Trump administration, could cause economic losses of hundreds of billions of dollars, increased natural disasters, and threaten people’s health. The burning of fossil fuels constitute a large amount of the greenhouse gasses emitted into the atmosphere, creating pollution. If hydrogen fuel powered these processes instead, the resulting reduction of pollution would be a major step toward ending climate change.

“[Hydrogen fuel cells] impacted [the automobile industry] by having another fuel source that we can look at,” Ross Koble, Toyota Communications Manager, said. “As we see the impact of greenhouse gasses to the globe we want to make sure that we’re trying to reduce the impact that vehicles and transportation have on that.”

The use of hydrogen fuel cells in vehicles, however, faces challenges. Unlike electricity, which is ubiquitous, there is no existing infrastructure in the United States for the transfer of hydrogen fuel anywhere except for California, which too has less than 100 fueling stations at the moment. Dr. Brouwer proposes a solution that involves a complete switch to hydrogen.

“One of the things that could be done is that we could build and/or use existing storage facilities for natural gas, and get rid of the natural gas, and use hydrogen instead,” Dr. Brouwer said. There’s a lot of challenges with regard to knowing for sure whether we can convert the natural gas system to a hydrogen system, but I’m doing lots of research in that area and I’d like to … just use the same kind of infrastructure to move hydrogen around in society and to store it.”

A second challenge in more extensive use of hydrogen fuel cells is the commercial viability. The currently high price tags of cars like the Toyota Mirai restricts possible customers of the car. According to the Institute of Physics, fuel cells are expensive because platinum, a rare and costly metal, is the catalyst used to ionize the hydrogen.

“I think [the Toyota Mirai] is a great idea, I just think the execution could’ve been done better, William Rainow (11), president and cofounder of Car Club, said. “Until the type of technology that they’re using in that car becomes more widespread and becomes more accessible, I think they’re going to have some trouble selling the car.”

Without overcoming these problems, hydrogen fuel technology will face significant roadblocks in widespread usage, but a green future can still be reached with enough dedication and action starting in each community.