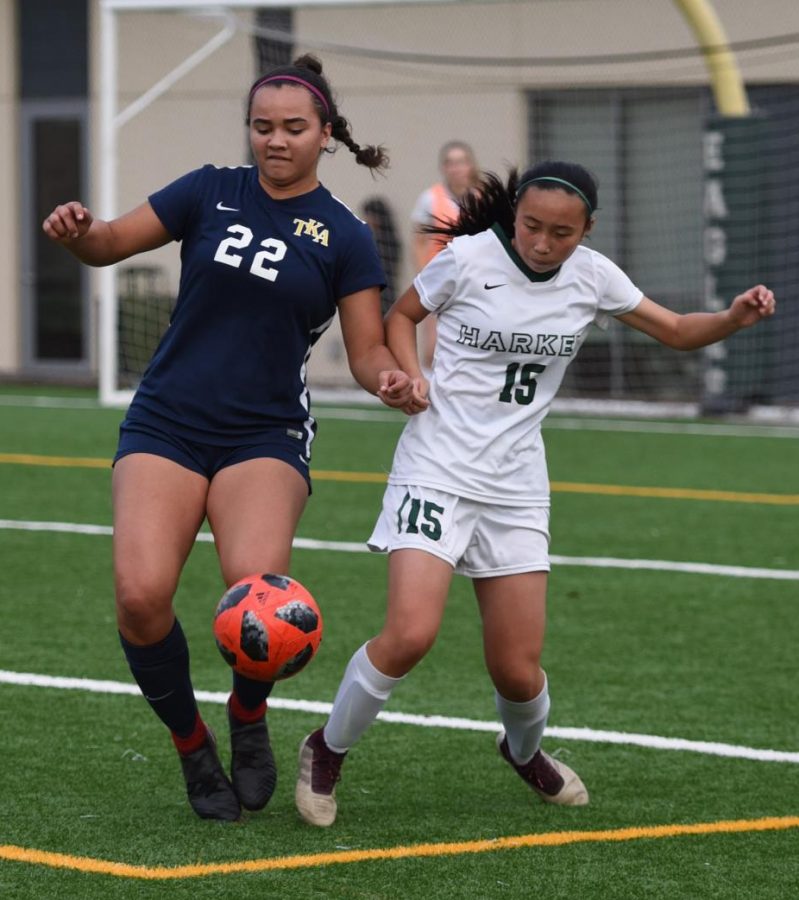 Kalyn Su (9) attempts to steal the ball away from an opposing player in a game against the Kings Academy Knights. The soccer team plays on Dec. 6 against Wilcox High at 4 p.m.

by Kushal Shah and Saloni Shah

The fall season of sports ended and was marked by historic results for both girls volleyball and girls golf.

Girls golf won the WBAL championship by an unprecedented 44 strokes and was just the seventh team in Harker history to qualify for NorCals, the last time being 12 years ago in 2006. Sophomore Natalie Vo carded a +7, 79 at the California State Girls Golf Championships in Southern California, and she is the first Harker female to qualify for the state meet.

Girls volleyball also qualified and took 2nd place in CCS, and went on to NorCals for the 3rd time in Harker history.

Girls water polo won the SVCAL tournament and also went to Norcals, but lost to Aptos in the first round.

Boys water polo concluded the season with a 17-10 record and placed second in their SCVAL tournament, losing the final game.

Football, led by seniors Ayush Vyas, Anthony Meissner, Mitchell Granados and Jared Anderson, had a record of 7-2 but failed to qualify for CCS.

The girls varsity tennis team finished off their 8-4 season with a 5-1 win over the Sanger Apaches. They also won 2 of their 3 league games.

Cross country faced a challenge with the injury of their top runner, sophomore Anna Weirich, but did not disappoint, with freshman Ritika Rajamani and senior Ryan Adolf qualifying for CCS.

“The season went well. We had a lot of talented young freshmen who were outstanding and had amazing races. I am excited to see them improve even more over the years. I had a lot of fun being part of the team this year because everyone truly loves to run and loves spending time together at practices and meets,” cross country athlete Aneesha Kumar (12) said.

This upcoming winter season, Harker’s sports will include boys and girls basketball, boys and girls soccer, and wrestling. The boys varsity basketball team will look to bounce back after losing 9 of their 14 league games last season. They started their season off with a bang with a dominant win 69-31 over the San Jose Bulldogs. The girls varsity basketball team also won their season opener with an assertive 41 point win over the University Prep Academy’s Golden Eagles.

Meanwhile, the girls varsity soccer started their season with a tough game against King’s Academy, which ultimately ended in a tie, but recovered in their next game with a commanding 5-0 win over the Independence 76ers. Harker’s boys varsity soccer team also played a tough team and suffered a rough 4-2 loss against the South San Francisco Warriors. They will look to defeat the Del Mar Dons next Wednesday.