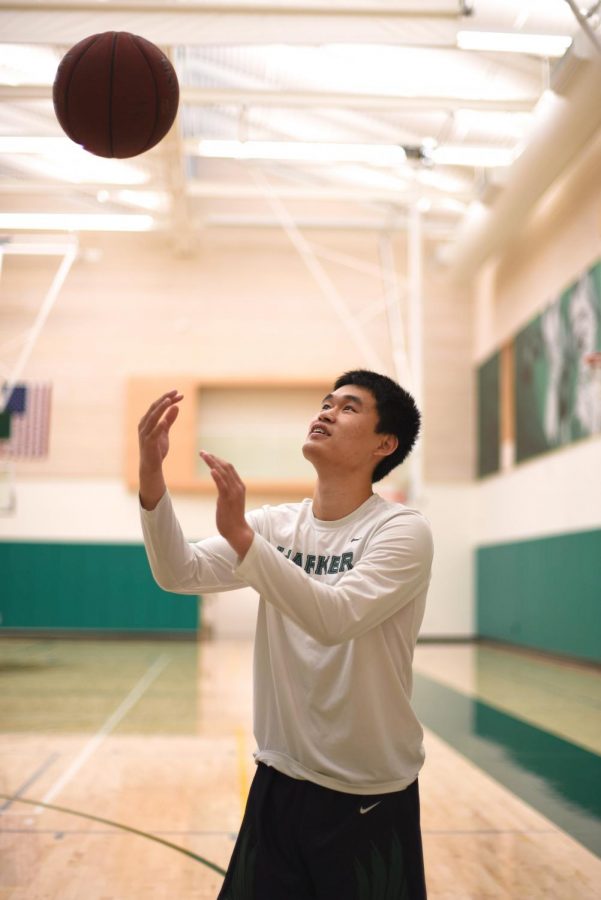 "I stopped thinking so short term—I realized that life is more about the bigger picture. Sure, I have three tests tomorrow, that’s a worry, but in the big picture, it’s a very insignificant aspect of my life, so it just helps me put in perspective a lot of things,” Gene Wang (12) said.

At a soaring 6 feet 3 inches, Gene Wang’s (12) presence dominates the gym floor of the athletics center. Sporting his signature Harker basketball gear and his black Nike PG2 sneakers, he leaps into the air cradling a basketball, loosens his grip and effortlessly tosses the ball into the hoop. The sound of the basketball falling through the net and hitting the ground echoes on the walls of the gym, closely followed by the thud of his feet landing solidly back on the floor.

For Gene, basketball isn’t just a sport—it’s all about the team. Having been a captain since junior year, Gene not only knows how to ace it on the court but also during practices and in the locker room with his team.

“It’s not only about the basketball,” Gene said. “As captains, we want to make sure everybody’s doing well in everything. So, [I’m] just making sure that everybody, from the kids in my grade to the freshmen entering the program, understands things need to be done the right way.”

Like most, Gene’s “big brother” nature to his teammates didn’t come naturally, but through the guidance of true leadership from a young age.

“We were in fifth grade, and [an assistant coach] was in high school at the time, and he would always drill us and would push us a lot. We looked up to him in a way,” he said. “Now, I’m the older guy, and I’m helping out these little kids and experiencing both sides of that relationship….so it’s kind of a full circle.”

Gene’s leadership on Harker’s basketball team extends beyond the school. While volunteering with camps and clinics, he noticed a need for free basketball coaching and initiated a program with a few teammates to coach for free.

“Whenever he watches our games, he’s always on the bleachers yelling or cheering,” Alex Zhang (9), Gene’s teammate, whom he has coached before, said. “He’s helpful in basketball, [and] he gives us tips to do better in games. He won’t get angry about what happens—he’s very cool-headed.”

Gene’s basketball journey hasn’t always been a smooth ride: in midst of his middle school basketball career, he dislocated his ankle but continued playing for the season, only to find the injury worsening.

“In the short run you might be looking for ‘I want to play this weekend, I want to do this, I want to get back on the court right now.’ In the long run, that hurts so much more,” he said. “I wasn’t back to full strength until I realized I needed to sit out for two months and just not do anything, and so I just sat out and didn’t do much, didn’t touch a basketball.”

And, indeed, Gene has embodied the “chill” mindset: even in orchestra, as the co-principal of the second violin section, Gene has found his way to ingratiate this outlook into the music he performs.

“Every other day, first thing in the morning, I’m just making music,” Gene said. “It’s a good way to ease into the day. Being in a room with so many different people, we all come together to play music together. Each section has their own individuality, but in the end it fits together very well.”

Instrumental music teacher and orchestra conductor Dr. Dave Hart emphasizes that Gene’s passion and musical instinct has helped him grow into the leader he is today.

“He’s willing to take risks that I don’t hear a lot of violinists willing to take. What’s been cool is that that confidence has led into him being where he is now as a section leader,” Dr. Hart said. “He leads by example, [and] he knows that off the bat: he’s here early, he keeps track of things, he checks in with everyone, [and] he knows the different personalities in his group, and I love seeing that.”

But outside of the orchestra room, of the basketball court and of his many other academic pursuits, Gene always finds time for those he cares about.

“[Gene] is very good at a lot of things: he does basketball and math and computer science, but he’s always really humble about it and willing to help,” close friend Kelsey Wu (12), who has known Gene since middle school, said. “He’s the type of person who will drop everything to support you even if he’s super busy.”

And ultimately for Gene, it’s all about gaining new perspectives. Whether it be his role as a basketball player, a musician, a friend or a teacher, his constant interaction with not only those within but also beyond his social circle—like his experiences teaching English and math to children– is what he enjoys the most.

“When I’m teaching something, I have to make sure I’m perfect at it first,” he said. “It’s difficult to communicate effectively with [fourth graders], so just finding ways to get my point across. Sure, I know how to explain CS to a fellow classmate who’s the same intellectual level as me, [but this is] taking a high level concept and transforming into something that can be understood by little kids.”

Despite Gene’s everyday worries, he’s began to look at what happens in the long run to fuel him in what he does now.

“I stopped thinking so short term—I realized that life is more about the bigger picture,” Gene said. “Sure, I have three tests tomorrow, that’s a worry, but if I look at the bigger picture, it’s a very insignificant aspect of my life, so it just helps me put in perspective a lot of things.”