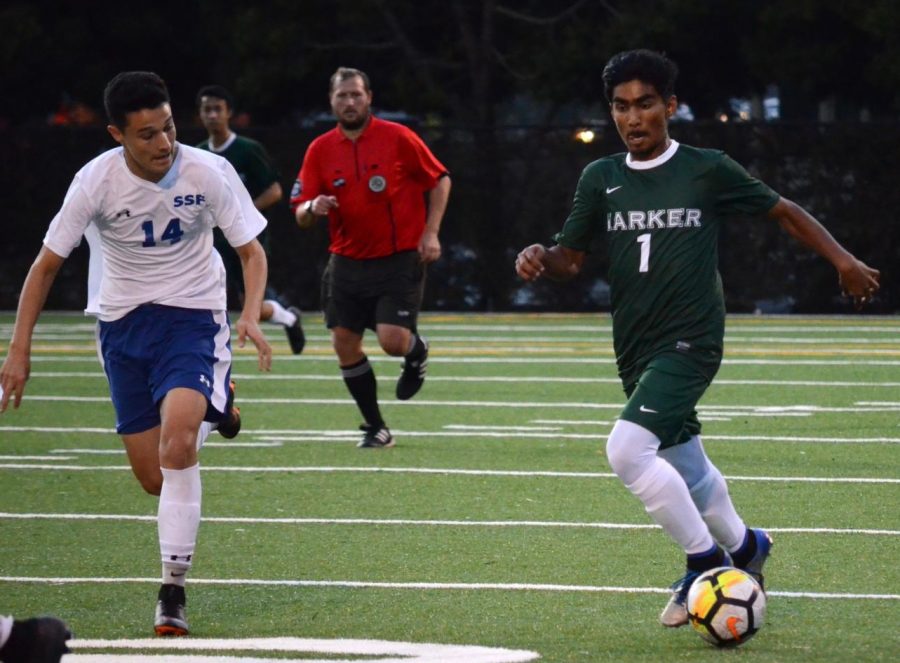 Ishaan Mantripragada (9) dribbles the ball downfield as a St. Francis player chases after him. The Eagles lost the game 4-2.

Lungs burning and hearts pounding, varsity athletes sprint back and forth, striving to improve themselves for their next game. Keeping up with the experienced upperclassmen are skilled freshmen, eager to prove their mettle. “Time!” a coach yells. Panting, the players attempt to catch their breath, slowly gathering in a huddle, grateful for a rest after the rigorous training. High-fives and words of encouragement are shared between the teammates, freshmen and upperclassmen alike.

Being a varsity athlete requires a tier of expertise and athleticism that typically only upperclassmen with years of extra practice have—yet, this year, fall and winter varsity teams include a number of freshmen athletes.

Despite their younger age, freshmen on varsity are experienced from years of honing skills in clubs, camps, and school. For some freshmen varsity athletes, practicing outside of school not only helped train physical technique but also provided an environment that supported teamwork between athletes of different ages.

“Now I’m really good friends with a lot of the upperclassmen so if I see them or I need help on something they’ll be happy to help me and it’s really nice,” said Brooklyn Cicero (9), who is on the varsity girls basketball team.

Although their level of skill allowed them to make their varsity teams, some feel an increased pressure because of their age.

“Being a freshman on varsity, you think ‘I can’t mess up because I’m younger than everyone and most people don’t make it here,’” said Tara Ozdemir (9), the only freshman on the varsity girls volleyball team.

But age is not the only thing that makes being a freshman on varsity harder. Often, physical differences can make competing against older athletes more difficult.

“It’s harder because you have to play against older people, so they’re stronger than you usually, and taller,” said Sinaya Joshi (9), who, along with Ainsley Millard (9), are the only two freshmen on the varsity girls water polo team.

However, many freshmen athletes say that age is not a factor in how upperclassmen on the team treat freshmen. Rather, ability determines how one is regarded in a varsity setting.

“I don’t think they look at you as a freshman,” said Sasvath Ramachandran (9), one of four freshmen on varsity boys soccer. “If anything, they look at you based on your skill, and on the varsity team, we’re all fairly skilled. There’s no real discrepancy there.”