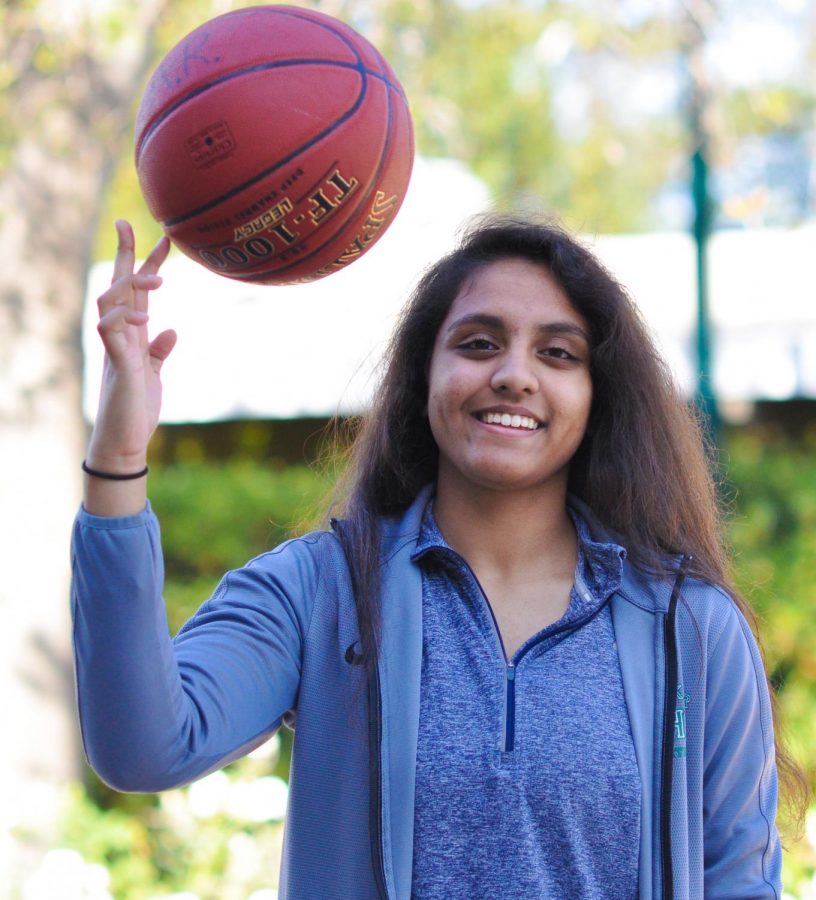 “I’m just a piece in life, but I think people who want to create connections is something that should be valued. Drawing on my own experiences, coming here, being new, doing all this stuff with basketball that I care about, bridging gaps between people with different values, different interests, different backgrounds—I think that's how just in general we all get better at some aspect of life, better at understanding, better at valuing people. I think on a surface level, yeah, I can play basketball; yeah, I can do nonprofit work; yeah, I can do this, I can do that, but we're all going towards the same goal: understanding each other, living for each other's passions and supporting people,” Akhila Ramgiri (12) said.

In the new gym, mostly empty in contrast to the commotion of lunch outside, a rust-colored leather ball rests on Akhila Ramgiri’s (12) palm briefly before her wrist flicks, and the ball sails through the air with precision, eventually swallowed by the net, which gulps with a low swoosh.

It is almost impossible to talk about Akhila’s life without mentioning the sport she’s been playing since she was five or six—basketball. Akhila, her brother and her father play the sport every week. Her mother joins the three of them in watching every Golden State Warriors game. They have season tickets. There’s no surprise then that Akhila has been on the varsity girls basketball team since freshman year and is now the captain of the team, a position she’s held since junior year.

For the past year, Akhila has also been involved in fundraising and raising awareness for the Hi5 Youth Foundation, a nonprofit organization that gives underprivileged children in India the opportunity to play basketball by building courts and providing coaching and equipment. Akhila believes basketball and sports in general encourage the children to “want to do better for themselves.”

“I went there [to India] for a week, and [basketball] completely changed [the kids’] lives,” Akhila said. “I think putting all their time and effort into something really is helping them get better life goals.”

With the Harker administration, Akhila hosted a tournament on Sept. 16 in the new gym, in which six other Harker high schoolers played as one of eight teams, as a fundraiser for the organization.

With a large group of family friends and extended family, Akhila has always been able to rely on an extended support system.

“Family is very important to me. I know a lot of people get their friends from school, and that’s definitely true for me, but I think really having that big support network [from family] has also shaped my life,” Akhila said. “Both of those groups, [family friends and cousins], combined with the people I meet at school, is just such a big supportive network that I’ve always felt very secure in.”

Yet, when Akhila switched schools to Harker after going to Challenger School up until high school, the change made her feel scared and insecure at first.

“I’m not that outgoing, so when I came here as a freshman, I was just like, ‘Oh man, when are these four years going to be up, I can’t do this, I’m not able to get out of my comfort zone,’” Akhila said. “But I think basketball started early [and] that open gym definitely helped me, and going from there, I think once you start talking to people, the community here has been incredible.”

Akhila’s friend Prameela Kottapalli (12) described the extent that Akhila has grown into the Harker community through basketball.

“It was a little bit hard to get to know [Akhila] because she was really shy at the beginning [of freshman year], but then as the weeks went on, she really started opening up,” Prameela said. “Basketball was that first place for her coming into herself and becoming the person she really is. Through those connections that she made that first season in basketball with people, whether they were in the same grade or whether they were seniors or juniors or captains, that was really a starting point for her.”

Although moving to another school was initially worrisome, Akhila began to enjoy school by relaxing and facing things one at a time.

“I think when I got here, just the fact that I was new, I was always looking at myself and being like, ‘What can I do to make people notice me, what can I do to fit in better?’ But I think once I started living more naturally and doing what I wanted to do, life just flows a lot better for me now,” Akhila said. “I just take things as they come. I don’t think about ‘I have to do this, I need to talk to this person.’ I just picture myself walking in a line, and whatever comes at me comes at me.”

After settling into Harker, Akhila values the people around her and the friends she has made.

“I found a really good home here, and it sucks that now that I’ve found that, I’m almost close to leaving it, but I think I’ll always be super grateful to the Harker community and the people who I’ve made friends with [who were] helping with that transition,” she said.

While being with her team or hanging with a friend, Akhila exhibits the same qualities of steadiness and reliability.

“Akhila’s grown a lot since when I first met her. Now more than ever, she’s not afraid to voice her opinion and change what she thinks is right or wrong. On the basketball team she’s a really big leader and the only captain, and I know that a lot of people look up to her because she’s always exhibiting these great qualities,” Akhila’s friend Elise Mayer (12) said.

After she became more at ease in his class, Akhila’s former biology teacher Dr. Matthew Harley described Akhila’s humorous side.

“When she first started class, [she was] incredibly quiet and stoic. But as she grew more comfortable, then [she] started participating and started joking around,” Harley said. “She’s one that because it’s not as frequent when she smiles, then it just lights everybody up. She does have this great sense of humor when you’re close enough to her to get comfortable.”

Besides being amiable, Akhila uses her dependability and empathy to be a good listener.

“She has such a big heart and she’s honestly the best friend to have. She’s been there for me more than anyone and she’s just always willing to listen,” Elise said. “She’s really good at connecting with people, and she has a lot of empathy for others.”

Through listening, Akhila is able to learn the stories of the people around her.

“I’m just a piece in life, but I think people who want to create connections is something that should be valued. Drawing on my own experiences, coming here, being new, doing all this stuff with basketball that I care about, bridging gaps between people with different values, different interests, different backgrounds—I think that’s how just in general we all get better at some aspect of life, better at understanding, better at valuing people,” Akhila said. “I think on a surface level, yeah, I can play basketball; yeah, I can do nonprofit work; yeah, I can do this, I can do that, but we’re all going towards the same goal: understanding each other, living for each other’s passions and supporting people.”