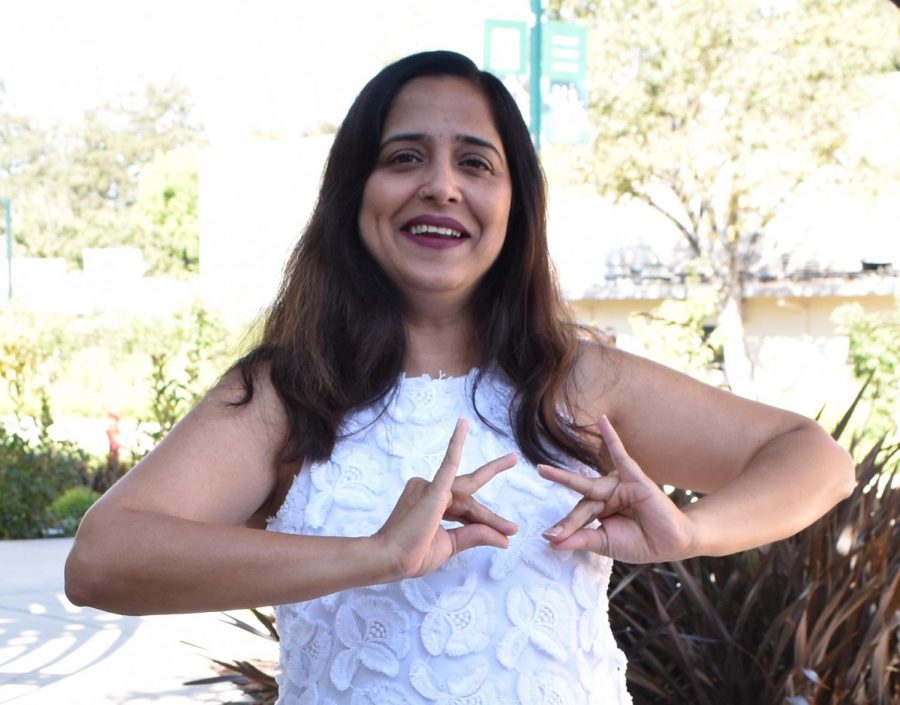 Gesturing with her hands, computer science teacher Anu Datar shows an Indian dance move. “I feel that dance actually makes me a better teacher because when I go to my dance teacher, and she teaches me something really complicated, I realize that it takes a while to master something,” Datar said. “So I think I developed empathy toward students who were struggling with things in class because I myself experience that when I go dance.”

by Anna Vazhaeparambil and Catherine Feng

Cheers erupt from the crowd at the NrityaGuru Annual Show as the curtains slowly open, revealing 11 dancers clad in brightly colored salwar kameezes, which are traditional Indian garments that consist of a loose pair of trousers and a long tunic, and adorned with glittering jewelry and swinging flower chains. In the Youtube video, the first notes of the music echo throughout the auditorium, and a melodic voice croons the lyrics as the women begin the performance, arms swaying gracefully and feet moving to the resounding beat of the song. And near the center of the stage is upper school computer science teacher Anu Datar, mouthing the words of the song as she dances beside other members in her dance company, BayArea Nritya Gurukul.

Datar has been learning Indian dance for most of her life and is experienced in all three of the major forms: classical, formally known as Shastriya Nritya, semi-classical and Bollywood. She first studied Bharatanatyam, a specific type of classical dance that originated in South India, for eight years in India, beginning in eighth grade and continuing until she completed her master’s degree in college. Bharatanatyam, traditionally performed by a soloist, features precise footwork and the most meticulous hand and facial gestures that typically narrate a mythical legend or spiritual idea from ancient Hindu texts.

“Stage performances in India were very elaborate,” Datar said. “They involved a lot of traditional things, like lighting the lamp, doing a short pooja. The performance would be very, very sacred.”

Soon after immigrating to the United States in 2013, Datar took up semi-classical dancing, which borrows elements from both classical and folk styles, at BayArea Nritya Gurukul, and she later joined a second dance company, Starrz Dance Academy of Performing Arts, to learn Bollywood. Having rapidly grown in popularity during the last century, Bollywood dancing is an essential aspect of Indian films and incorporates more complicated steps and variation in the rhythm than previously seen.

“[Bollywood dancing] connects you with your people,” Swati Savale, Datar’s dance instructor, said of the dance’s increasing global recognition. “Usually kids come to us because that’s how they relate to their culture, through Bollywood. But it is becoming more and more popular also in other countries, so it’s not just remaining like an ‘Indian Bollywood.’”

After years of practicing different types of Indian dance, Datar notes that while Bollywood is a more contemporary style, the “peppy music” and “cool moves” make it enjoyable and special to her.

“[Bollywood dancing] is not as cultural as the traditional form of dancing, but it is cultural in the sense that almost everybody in India, no matter if they’re from a village or they are big industrials, all watch movies,” Datar said. “So I would say it still relates to my culture, it still satisfies the Indian in me.”

Datar quit dancing for periods of time in the past when she was pregnant, but she was always drawn back to it and would feel even more energized and excited upon returning.

Her fellow teammate, Urvashi Jaiswal, who dances with her at BayArea Nritya Gurukul, repeatedly describes her as “a very compassionate person” and someone who “really loves dancing.”

“Anu is a very quick learner, and she will grasp the steps quite easily,” Jaiswal said. “She’s very helpful. She’s a good team player, and she’s very disciplined, too. She’s regular to her dance practices: she knows that if she’s late, others would suffer because of her. And she’s always looking for ways to improve her dance and pick up new dance forms.”

Datar also credits dance for helping her gain a better understanding of the challenges her students may face in the classroom.

“I feel that dance actually makes me a better teacher because when I go to my dance teacher, and she teaches me something really complicated, I realize that it takes a while to master something,” Datar said. “So I think I developed empathy toward students who were struggling with things in class because I myself experience that when I go dance.”