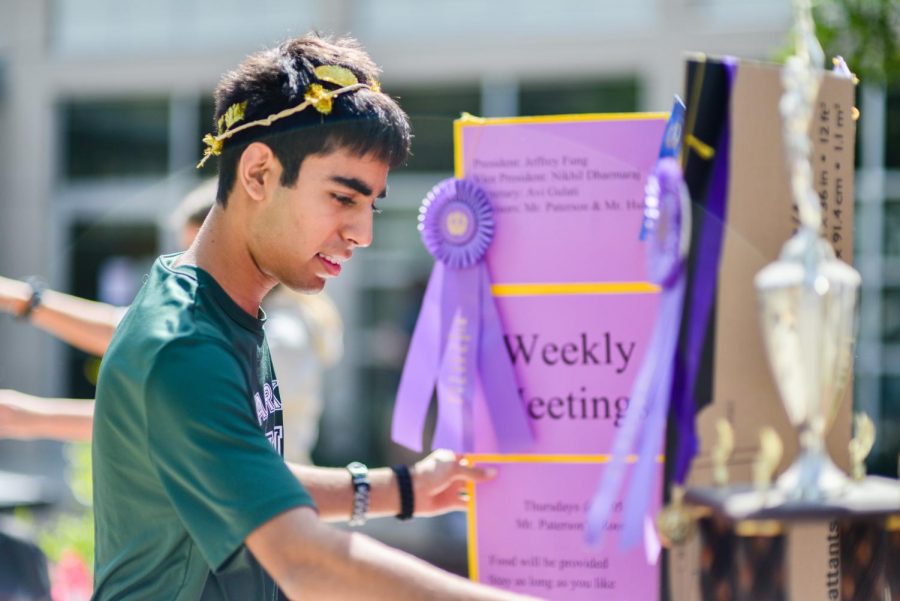 This year’s Club Fair invited students to join a plethora of on-campus organizations or attract new members to existing clubs in the quad during lunch on Wednesday.

Unlike the past two years, the event did not take place in the Nichols atrium. Instead, Club Coordinator and Assistant Activities Director Eric Kallbrier opted for Club Fair to be held in the quad, where tables were arranged around the edges and at the center.

“Our student organizations program has gotten pretty large because of all the different interests that we have on campus, and we wanted a space that would be more conducive to having everyone out there,” Kallbrier said. “We had a lot of people out there looking for ways to get involved in the community.”

Each club was given a single table for club officers to manage. Officers vied for the attention of students looking for clubs to join, with many presenting handmade poster boards.

Some clubs brought with them activities and other ways to attract members: Guys’ Gig and UnPlugged Guitar Club performed songs, Harker Robotics’s booth featured a demonstration with its robot, Spirit Club representatives waved promotional signs and several clubs handed out candy and other snacks.

Many new clubs this year used Club Fair as an opportunity to spread awareness of their organization in addition to jump-starting membership.

“I started [Law Club] because of my recent interest in wanting to pursue law as a career,” said Law Club founder Sachi Bajaj (10), who helped host its booth at Club Fair. “I find law absolutely fascinating and would love to use this club as a platform to encourage more to learn about this important profession.”

Clubs will begin to host their first meetings and activities in the coming weeks.

“I saw some very exciting and interesting displays and club booths,” Kallbrier said. “The overall atmosphere was joyful and fun, and that is what it is all about: a way to celebrate all our interests on campus.”