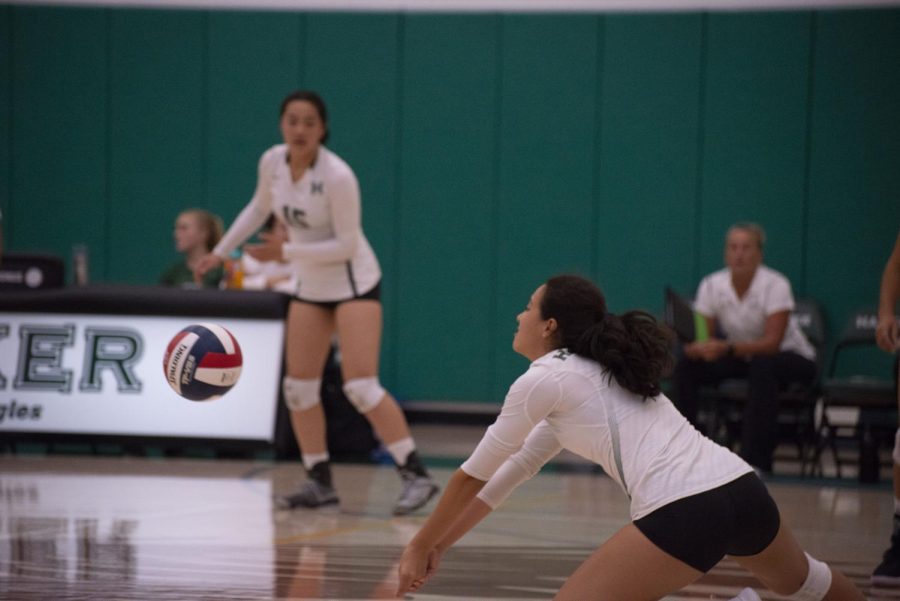 The Eagles started out strong, going head-to-head with Westmont for the first half of the set, before Westmont began pulling ahead. However, just when it looked like they were about to lose, Harker began to catch up, thanks to strong serves from Michelle Ning (10) and aggressive hits from Lauren Beede (11). They eventually tied at 22 points, where the winning serves from Tara Ozdemir (9) brought them up to 25 to win the first set.

“It was a rough start, but I think we really pulled through at the end,” player Allison Cartee (12) said. “Our back row passers did a really good job of reading the hitters, picking up all the tips, and especially the line shots, which was really great because then our offense could get a lot of good spikes.”

The second set began similarly, both teams going head-to-head, always within one point of each other until Westmont began pulling ahead and eventually won. While the Eagles had a massive turnout of support for the game, Westmont brought substantial support of their own, a presence which did not go unnoticed throughout the match and aided in Westmont winning the set.

In set three the Eagles seemed to learn from their past mistakes. The game was driven by strong offense from Ashley Jazbeck (11) and, once again, successful serves from Michelle Ning. The score reached 19-9, and the Eagles kept climbing from there. Westmont only scored 2 more points before the set was over.

The Eagles swept the final match with a joyous and well-earned 25-15, thanks to stellar defense from Tara Ozdemir (9). Tara, the only freshman on the team, has proved to be a talented libero and has received a lot of love from the rest of the girls.

“Tara’s like the love of my life,” co-captain Emily Cheng (11) joked with a hint of pride. “She played really well today and stepped up to the occasion. She got some awesome digs where she was literally flying on the court and getting perfect ups, and I couldn’t be more proud of her as an upperclassman.”

Both the JV and freshman teams also prevailed in their games against Westmont, which were also held in the Athletics Center at 4 and 5:30.

This year especially, coach Theresa “Smitty” Smith is confident that the girls can go farther than they’ve ever gone, with CCS being the end goal to all their hard work. The varsity girls’ volleyball team has not made it to CCS for the last two years, despite qualifying every year before then.

“The sky’s the limit for this team,” Smitty said. “It’s a young team, even though we have seven seniors, there’s a lot of youngsters that are on the floor playing. It’s a really, really good group, maybe the best energy and camaraderie we’ve had in the last couple years.”

Their next game will be held against Los Altos High School on Wednesday at 6 p.m. in the Athletics Center.