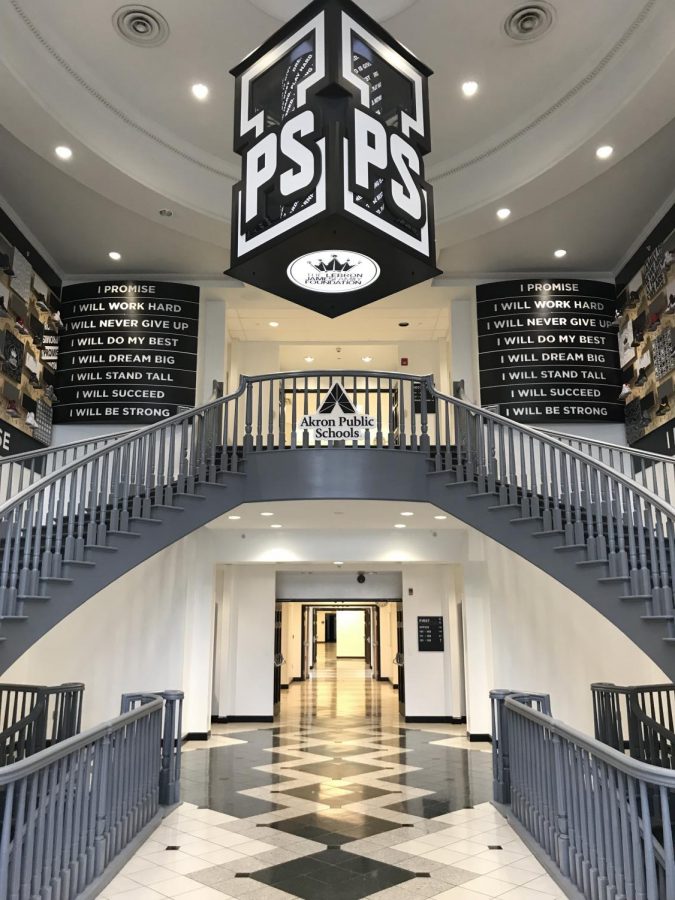 The interior of the I Promise School in Akron, OH. The school was created through a partnership between the LeBron James Family Foundation and the Akron public school district.

by Gloria Zhang and Varsha Rammohan

“Nothing is given. Everything is earned” is the motto of LeBron James’ I Promise School. Closely linked to his I Promise initiative that tackles high school dropout rates, the motto serves as a reminder for the Akron youth to never give up on their academics and finish school.

The LeBron James Family Foundation created the I Promise School, a public school that aims to serve at-risk children in Akron, Ohio. The school opened on July 30 with 240 third and fourth-grade students but expects to teach grades one through eight by 2022.

“One of the things we are really trying to talk about in the community is that we are just a regular public school. . . Our district funds the same about of teachers, we provide the transportation, we provide free lunches to our students like they do all of the other students across Akron,” Keith Liechty, the Akron Public Schools’ liaison to the LeBron James Family Foundation, said.  “But what stands out is all of the support that we get from the foundation and all of their partners. One of the largest contributions right now is what we call class reduction, so instead of having about 25-30 kids in the classroom, we have about 19-20 kids in the classroom.”

The Akron public school district and James’ philanthropic foundation collaborated to support the school, which has an extended eight hour school day, a student support circle, and GED courses for parents. The school also emphasizes nutrition: it offers free breakfast, lunch, snacks and drinks to all students. If a student successfully graduates high school, the James foundation will cover full tuition for the University of Akron.

“In orientation, when we told the parents that our school would go from 9-5, we got a standing ovation. They were so excited. Traditionally our kids get out of school by 2:30 and they get home by 3, and that means child care for a lot of families. Here, they know that their kids are well taken care of,” Liechty said. “We’re really proud of our family resource center. That’s where the wrap-around resource support is going to be provided. This is where we can bring in the parents and we can help the parents. . . . It’s our goal that every family that comes in for support gets an individual family plan. We’ve only been open for three weeks, and we’ve already had over 10 families come in, and they now have a family plan, which means we sat down and set goals for themselves and their kids, and we’re going to help them achieve those goals.”

In Nov. 2017, the foundation addressed the Akron school board about creating a school that specifically gives academic opportunities to at-risk children. Like many of the children he seeks to help, James grew up in Akron and faced several difficulties due to his unstable home. He sought to create the I Promise School because he wished to provide struggling future generations with stable help and care.

“I know exactly what these 240 kids are going through. I know the streets they walk. I know the trials and tribulation that they go through. I know the ups and the downs. I know everything that they dream about, all the nightmares they have because I’ve been there. They’re the reason why the school is here today.” James said at the opening of I Promise School.

The school also gives each one of its students a free bicycle and helmet. James said his bicycle gave him a sense of freedom and wants his students to experience the same feeling. This is part of James’s initiative to not only impact its students’ academics but also touch their personal lives.

Commenting on an UNINTERRUPTED video featuring himself, James tweeted he was “#MoreThanAnAthlete”. He believes that people with a certain amount of power, influence, and resources should help the future generations.

“As an athlete myself, I can see that athletes, [like LeBron], can impact kids and future generations. They are definitely role models who try to inspire kids. I think more and more athletes give underprivileged kids the same chances they can get,” varsity basketball team captain Akhila Ramgiri (12), who traveled to Mumbai as part of a volunteering organization that coaches underprivileged kids basketball, said.

In response to James’s efforts, a petition for him to replace Betsy DeVos as the next Secretary of Education has gained attention through social media channels. The thepetitionsite.com petition refers to James as a “highly respected and extremely influential community advocate and activist.”

By giving the disadvantaged community in Akron access to education and support, James ultimately hopes to decrease the city’s crime rate and increase its median income and literacy rate.

“I think one big takeaway that I had [when traveling to Mumbai] was, you know, I’ve done a lot of charity work teaching, and you appreciate the donations and the charity and all, I’m not saying there’s anything wrong with that. But when you’re looking at the problem itself, starting at an early age is what we should be doing and what should be happening. Donating to charity and all that stuff is very helpful, but I think it’s a little bit too late. I think targeting young kids is really important because once you get that drive in a young person, it’s really hard to stop,” Akhila said.