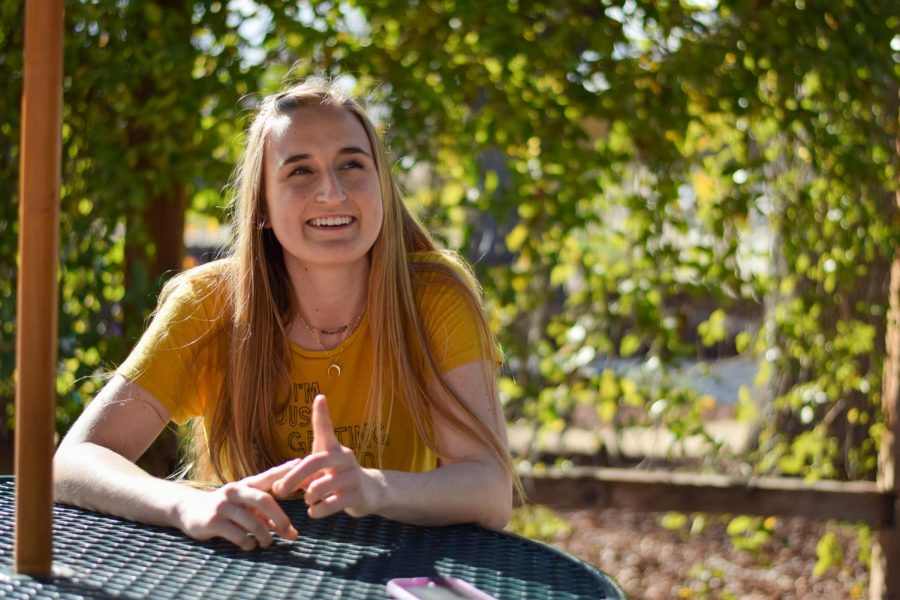 “I can be serious, and I care a lot about a lot of things, but I also just like having fun and people feeling comfortable being their true selves,” Isabella Spradlin (12) said. “You don't have to be one-sided — you can have different sides of your personality, and different moods.”

A sense of humor can be “droll” or “witty,” “dry” or “tongue-in-cheek” ; each word carries a slightly different meaning. “Goofy” is Isabella Spradlin’s (12) descriptor of choice.

“I feel like ‘goofy’ means that sometimes you have to be okay with people laughing at you instead of with you,” she said.

Her definition stems from her playful relationship with her three sisters, who loved to joke around with each other. As the youngest of the four, Isabella was frequently part of the punchline.

“When I was really little, they would choreograph music videos and routines just to have me do them, and I would be so happy that they were devoting all this attention to me, but they were just making fun of me,” she said, bursting into giggles at the memory. She has to wait half a minute to compose herself. “But it’s okay. I laughed about it then, and I realized a little bit later what it really was, now I can laugh about it again.”

She had fun with her sisters, to be sure — like when they recorded a rap together on their answering machine and her only role was saying the “beep!” at the end. But she also looked up to them in a more serious context. Now, as a senior and a co-captain of the varsity volleyball team, that duality is still fresh in her mind.

“I just tried to give people a space where they wouldn’t be judged for just like dancing when we’re at practice or something like that — sometimes, it’s good to lighten up,” she said. “For me, being a senior on the team, I wanted to put myself out there, and someone had to set the precedent. All of us fed off each other’s energy.”

That energy came in the form of pep talks, tenacious plays on the court and her infectious, dolphin-like laughs. As a leader, she inspired both respect and admiration — but no trace of intimidation.

“Oh yeah, Isabella is my dad,” sophomore Anya Gert said with a laugh. “She drove me to the middle school a lot, which proves her dad-like capabilities. She gave me advice about not just volleyball but life in general, and it was really nice to have a friend who was an upperclassman. Even when I was a freshman, she never seemed that scary. I didn’t think I needed to impress her to gain her respect.”

But when Isabella was a new sophomore on varsity, she remembers struggling to come out of her shell.

“My freshman year especially and my sophomore year, I was just really shy,” she said. “When people first met me, I think they thought that that was just who I was all the time — just very shy, and not talkative, and not very assertive, and definitely not someone who does kind of weird things sometimes.”

Three years later, she’s anything but.

“When we had to go over to Blackford, we would all go over in different cars, and whenever I would slow down she would go in front of my car and dance until I stopped,” said Lauren Napier (12), Isabella’s co-captain and close friend. “It’s something that’s kind of indicative of her personality and how free-spirited she is. She doesn’t really care about what everyone thinks.”

In some ways, Isabella’s high school experience was a journey from younger sister to older sister, perpetually applying past lessons to the new experiences. While she didn’t think much of it at the time, she now hopes that her antics inspired others to express all parts of their personalities, not just the focused mindset of the student-athlete.

“I can be serious, and I care a lot about a lot of things, but I also just like having fun and people feeling comfortable being their true selves,” she said. “You don’t have to be one-sided — you can have different sides of your personality, and different moods.”

Her love of acceptance and collaboration drew her to the issue of human rights, as she remembers listening intently as her advisor and WHAP teacher Dr. Mark Janda taught her about the post-World War II era in sophomore year.

“The International Declaration on Human Rights was probably one of the biggest things,” she said. “I thought it was really cool to get any number of nations to agree on something, especially now where politics are much more polarized. It’s thinking back on that period when there was more compromise and thinking about universally, what are people’s rights and how should people be treated?”

How should people be treated? Isabella answers this question in her actions, whether she’s fundraising to stop human trafficking or initiating a team dance party in the locker room.

“This is a kid who smiles at everything, is optimistic about everything, greets everybody as if she’s thrilled to see you, and that’s the way it’s been since day one,” Janda said. “For four years, she’s been unwavering happiness and joy. So that’s what sticks out to me — her readiness to laugh, to smile — readiness to talk to anybody.”