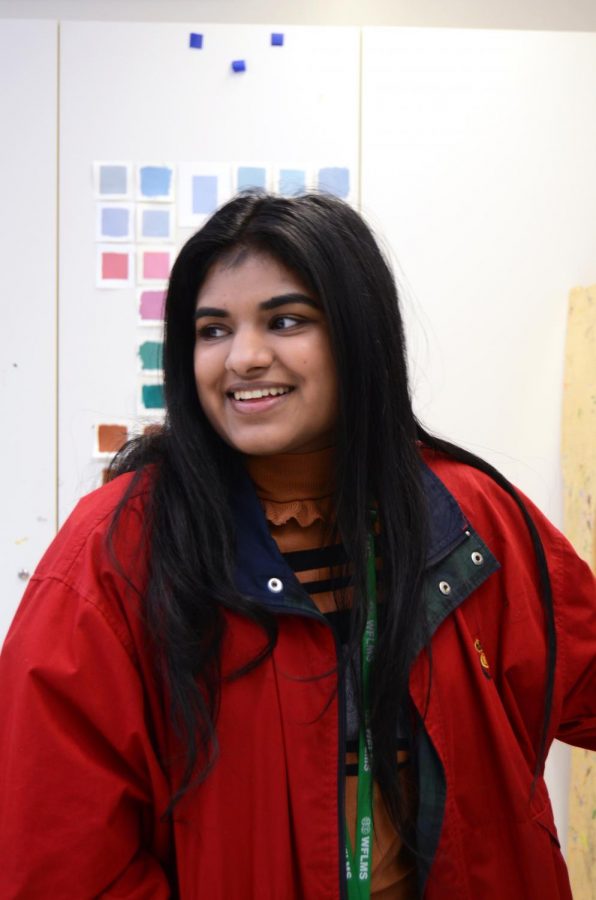 "I found out very early on that I wanted to be an art major of sorts," Raveena Panja (12) said. "I’m a game design major now, but it took me a while to come to that path. I was surrounded by a lot of people that didn’t quite understand why I wanted to do art in spite of going to a very STEM school. I think the fact that most people didn’t take me seriously for wanting to do art here propelled to me want to do it more and gave me more confidence. If everybody else thought I couldn’t do it, it was all the more reason to do it."

by Sydney Takemoto and Melissa Kwan

Harker, some say, is a very STEM-focused school. But despite the push to pursue science, Raveena Panja (12) found herself pulled towards art.

“I was surrounded by a lot of people that didn’t quite understand why I wanted to do art in spite of going to a very STEM school,” she said. “I think the fact that most people didn’t take me seriously for wanting to do art here propelled me want to do it more and gave me more confidence.”

Raveena was motivated both in spite of her environment and because of it.

“If everybody else thought I couldn’t do it, it was all the more reason to do it,” she said. “At least at home, my parents were pretty supportive. My dad is a software engineer, but my mom’s side is very artistic. She was a fashion designer. Her dad was a military officer, but also low-key did art on the side. I think I inherited artistic qualities from my mom, but my dad has a very spiritual side to him and I inherited a lot of that from him and you can see that in my artwork that a lot of qualities of my art comes from my roots.”

She teaches art to younger kids at The Lord of the Light Art Studio in Almaden.

“It’s a very fulfilling experience for me, especially for the little kids too,” she said. “At a young age, I was always kind of prevented from doing art as any more than just a hobby, even though I knew that it was something I wanted to do as a profession later on in my life. [I want] to be able to teach kids and inspire them to be happy about their art and maybe consider doing it as a career if that’s something they want.”

Perhaps her artistic sense is evident from the way she dresses — bold colors with occasional chic prints. But her quiet demeanor belies a surprising other interest: video games.

“I really love playing video games,” Raveena said. “I’ve been really interested in video games since elementary school. I would play a lot with my sister on our PlayStation 2. Towards middle school, I started to play a little more mainstream games like Call of Duty, Destiny, Assassin’s Creed. I really got into this one game called League of Legends. I started to play a lot of ranked games in the end; I had a lot fun doing that, but now video games is something I really love.”

Raveena is off to become a game design major in college, unifying both her interests in one career. As for her legacy at Harker, however, she mainly hopes to be remembered for her willingness to support others.

“I feel like the best word to describe me in [my friends’] perspective would be ‘mysterious’ because I’m quiet to most people,” she said. “There are only so many people that you will remember in high school because there are always those people that will stand out in a certain point of time because they’re very outspoken. You always see them putting themselves out on the stage showing off their talent and who they are. For me, I’m more quiet and reserved, but I have been going to Harker since 1st grade. As to how I want to be remembered by people: it doesn’t have to be a great thing, just for being a good friend. Even if I haven’t talked to someone in a really long time, if they came to for advice, I would still talk to them.”