Humans of Harker: Akshaya Vemuri retains elements of tradition in her friendships 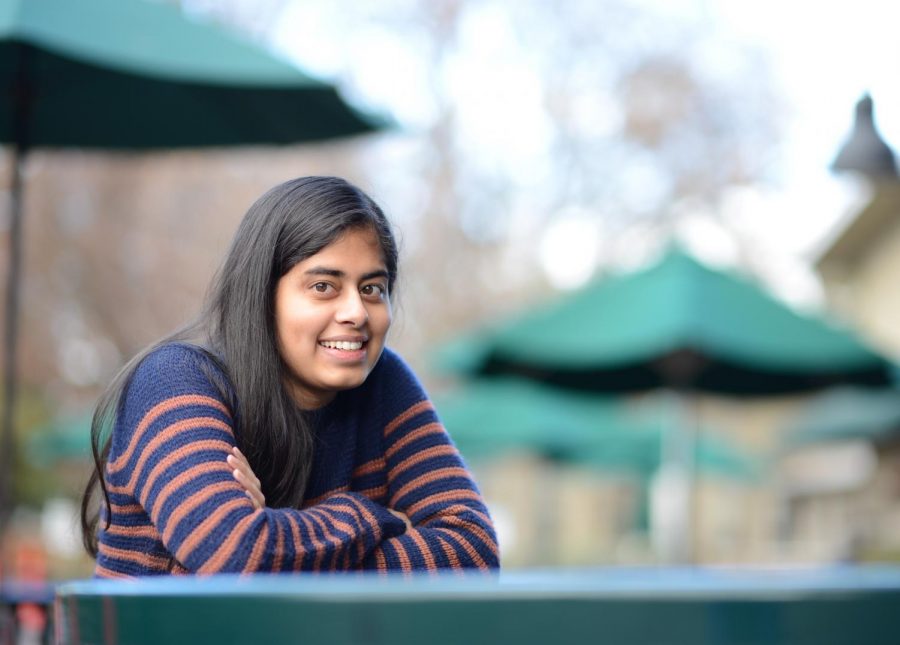 “Most of our entire friend group played basketball in middle school,” Akshaya Vemuri (12) said. “And on one bus ride, we wanted to come up with names for each other that were related to a family. Everyone has their unique identity in the group, and we kind of use their nickname to identify them. [Meena Gudapati (12)] was just writing down a ton of nicknames for me, and she started calling me ‘Akla’ after ‘baklava’ and just shortened it.”

Born four weeks premature, Akshaya Vemuri (12) has always been considered small for her age, but this never stopped her from pursuing her athletic goals.

Through the past three years, Akshaya has become a crucial runner on the varsity team.

“Cross country is a team sport in the way that the team scores points together but running individually allows you to develop the mental side of it,” Akshaya said. “It feels really good to finish the race and know you had the confidence and motivation to get through the whole thing.”

Akshaya’s close friend and cross country teammate Gloria Guo (12) appreciated her ability to connect with others.

“On the team, Akshaya isn’t one of the most vocal or outgoing members of the team, but she definitely stands out as the most understanding and conscientious person among the captains,” Gloria said. “She has a real talent for assessing situations and knowing the perfect way to respond, or even just getting other people on the team and matching their sense of humor. She just understands people so well.”

Akshaya brought her laid-back leadership to her position as program director for the nonprofit organization MathAndCoding, where she provides underprivileged and underrepresented students with a basic understanding of computer science.

“I really like being able to help the students discover their passions for computer science,” Akshaya said. “The best part is seeing how their faces light up when they make their own programs and create their own games.”

While many students undertake too many activities and struggle to prioritize, Akshaya has found a way to balance her hobbies.

“I used to be influenced by what others were doing and feel the need to be like them, but I’ve changed. Through high school, I’ve discovered just a few activities that I’m really passionate about like volunteering and this has made me more confident in who I am,” Akshaya said. “I like taking my time to understand and enjoy what I do, and I don’t get caught up in the hustle and bustle of things around me anymore.”

Throughout her life, Akshaya has relied on her older sister Shreya Vemuri (‘13) for advice.

“I’m so glad that Akshaya is both my sister and closest friend,” Shreya said. “I know that sounds cheesy, but our five-year age difference hasn’t stopped us from being super close. She’s my go-to for a good laugh, a fun time, or just hanging out and chatting.”

Akshaya’s friends point to her quirky personality, which includes a penchant for tagging other people in memes.

She has remained largely with the same friend group since elementary school. Many of their middle school antics have become inside jokes — for example, Akshaya’s unofficial nickname is still “Akla.”

“Most of our entire friend group played basketball in middle school,” Akshaya said. “And on one bus ride, we wanted to come up with names for each other that were related to a family. Everyone has their unique identity in the group, and we kind of use their nickname to identify them. [Meena Gudapati (12)] was just writing down a ton of nicknames for me, and she started calling me ‘Akla’ after ‘baklava’ and just shortened it.”

The friend group’s identity formed on a chain email with subject line “re: the picture,” which they started in middle school before any of them had phones. The chain email became obsolete after a few years, but the title “re: the picture” lived on in iMessage and Snapchat group chats.

“We’ve grown and bonded together over the years,” Akshaya said. “As people have joined our group, we’ve gotten a lot closer. I can talk to them about things that I felt I couldn’t when I first got to know them. It’s good to have that support group in high school.”