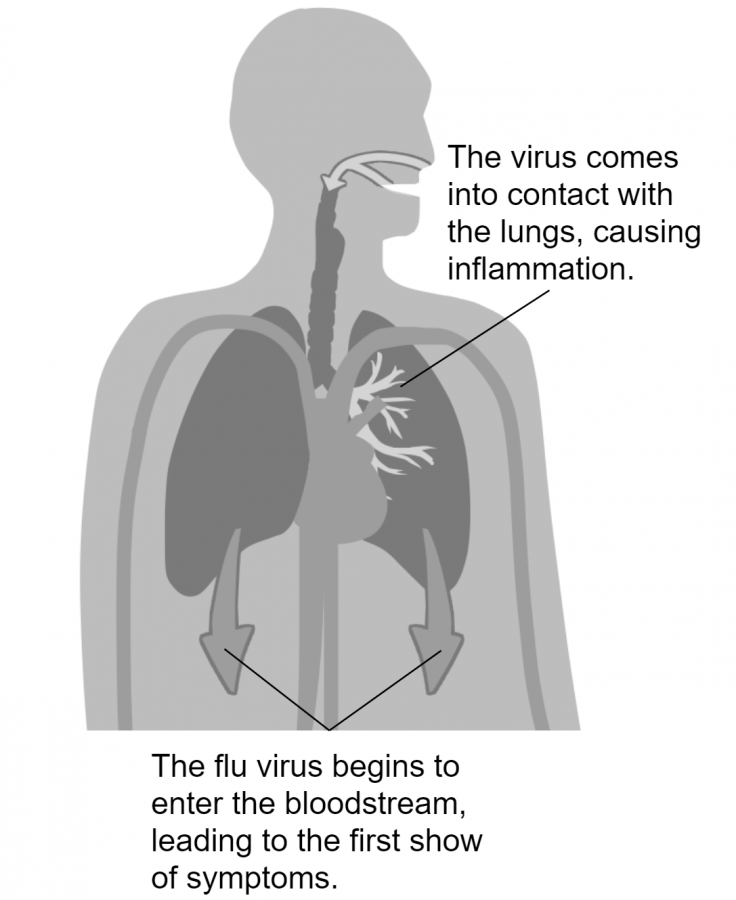 by Katherine Zhang and Srinath Somasundaram

Despite lowering numbers of flu-related doctors’ visits in recent weeks, this year’s flu season, the deadliest in a decade, is expected to last several more weeks as influenza viruses circulate throughout the country. With thousands of Americans dying weekly from the flu, this season is projected to surpass 2009’s H1N1 outbreak.

Even in mild seasons, the flu can become deadly and can take a significant toll on American life, resulting in between 12,000 and 56,000 deaths annually since 2010.

Although it is unclear how many total deaths have been caused so far by the flu, the 2017-2018 flu season has already reached a hospitalization rate of 59.9 per 100,000 people in the 18 weeks since its beginning. In contrast, the 2014-2015 flu season, which the CDC says is comparable in terms of severity, took 25 weeks to reach this point.

“Every flu season has some different variation of which type of flu viruses are most common, the pattern and severity of illness, and of season timing – flu is unpredictable and it keeps us on our toes,” CDC spokesperson Ian Branam said. “This flu season is notable for the sheer volume of flu that is occurring, with widespread activity across most of the country at the same time.”

Flu seasons usually end in March, and with stagnating numbers of hospital visits, many are hopeful that this flu season is winding down.

“As more people come down with the flu, they gain immunity to it, and more people have gotten the vaccine along the way,” upper school nurse Clare Elchert said. “The flu season generally lasts until March, but it is coming to generally towards the end of the flu season.”

The CDC continues to report widespread flu activity throughout 49 of the 54 U.S. jurisdictions.

“We don’t know yet if the flu season has peaked and won’t know more until we see the data for the coming weeks,” Branam said. “It’s likely there will be significant flu activity for many weeks to come.”

Several factors have contributed to the severity of this flu season, including the number of strains that are present and the ineffectiveness of the flu vaccine.

Unlike previous seasons, this year both influenza A, which includes H1N1 and H3N2 and often causes epidemics, and influenza B, a milder but still harmful type of flu, were active at the same time.

Though influenza B does not cause epidemics, it has most likely exacerbated the situation caused by the main culprit: a strain of influenza A known as H3N2.

H3N2, a subtype of influenza A, tends to hit humans harder than other strains of flu. This strain is associated with higher hospitalization and death rates, as it causes more inflammation, lasts longer and can put the immune system into overdrive, further weakening the patient. Typically, H3N2 does not dominate the flu season, but it has been the most prominent strain this year.

To exacerbate the problem, this year’s flu vaccine has not been as effective as in previous years — the CDC reports that it is only 25 percent effective against the worst strains.

This is likely because H3N2 tends to mutate over time and is very difficult to grow in culture. Flu vaccines and good care can help alleviate many of the symptoms of the flu, which could make the difference for immune systems when fighting the flu.

“One thing for the vaccine is that although it didn’t protect people from getting the flu, it looks like it protects people from dying from the flu,” said Dr. Scott Filler, a professor of medicine at the Division of Infectious Diseases at Harbor-UCLA Medical Center. “But the other key part is of course is if a person feels like they are coming down with the flu, they should avoid going to school, and for people who are healthy, they should wash their hands and use Purell, especially before eating.”

Through a chain reaction triggered by the presence of a virus, immune systems begin to act, which leads us on the road to recovery — the disease can begin to overwork the immune system as well.

When a viral particle engages with a cell, the immune system responds by creating cell-signaling proteins known as cytokines, often called a “cytokine storm” in the severest cases due to the fact that it causes an overproduction of immune cells. These immune cells concentrate in the lungs, where they work to fight infection, but the resulting lung inflammation and fluid buildup can cause the lungs to swell, making it harder for the patient to breathe.

Most commonly, however, the immune system is so concentrated on fighting the lung infection that less oxygen flows through other parts of the body. Without normal levels of activity, the body tells its organs to slow or shut down in a process known as multiple organ dysfunction, which can lead to death.

Children are especially susceptible to such dangerous conditions due to the lack of development in immune systems. According to the CDC, 97 children have died so far this flu season. Signs of a severe infection include difficulty breathing, vomiting, slurred speech and coughing blood.

The CDC advises that parents keep their children vaccinated and that patients see doctors immediately if they encounter such symptoms.

This piece was originally published in the pages of The Winged Post on March 6, 2018.