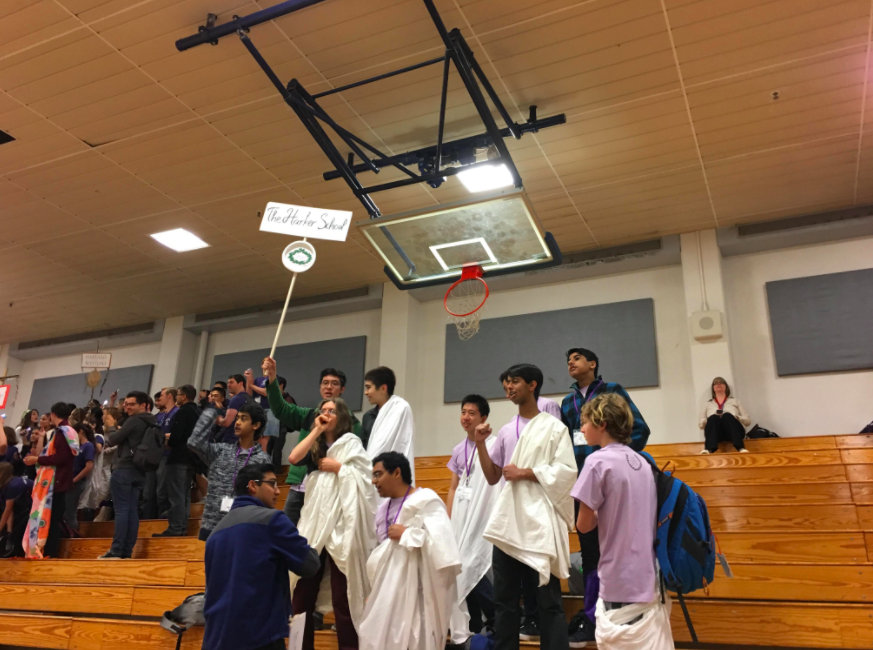 Members of Harker's JCL delegation cheer during the 2017 state convention's opening ceremonies. This year's California Regional Certamen Rounds (Carcer) was held at the Acalanes Adult Education Center in Walnut Creek, while the 2018 state convention will be held at the Menlo School from April 13 to 14.

Carcer is the qualifying competition for the teams that will compete in the semifinal and final rounds of competitive certamen at the state convention, a two-day event where members of the California Junior Classical League (CAJCL) convene to compete in academics, arts and sports.

Certamen, meaning “competition” in Latin, is a quiz bowl-style game with toss-up questions centered on the language, Roman culture and history of classical civilizations. The CAJCL is comprised of chapters, schools and other organizations with at least five eligible members and a sponsor. Students who either have taken or are currently taking a classical language can become members.

This year, Carcer was held at the Acalanes Adult Education Center in Walnut Creek. Harker sent level one and level two certamen teams from the middle school and an advanced team from the upper school.

“Certamen is perennially popular and I think that on one level, students like using the buzzer. On another level though, certamen is really great and fun because it’s got a little something for everybody,” Latin teacher Scott Paterson said. “It appeals to a wide variety of Latin students: those who are really into the language, those who are into the culture, something for everybody.”

The upcoming state convention will be at the Menlo School from April 13 to 14.
ICE agents arrest California immigrants
Immigration and Customs Enforcement (ICE) agents have arrested over 150 individuals in Northern California.

Oakland mayor Libby Schaaf issued a warning on Saturday that ICE agents would be making rounds in California. She received backlash from ICE agents following these warnings.

California became a sanctuary state in the new year following a bill that was signed by California Gov. Jerry Brown. The bill barred police from asking people about their immigration status or participating in federal immigration enforcement activities.

Lucky Chops was introduced by instrumental music teacher Chris Florio, who found the band through YouTube. When the upper school orchestra went to New York’s Carnegie Hall last spring, Florio surprised the students with a performance by Lucky Chops.

This piece was originally published in the pages of the Winged Post on March 6, 2018.