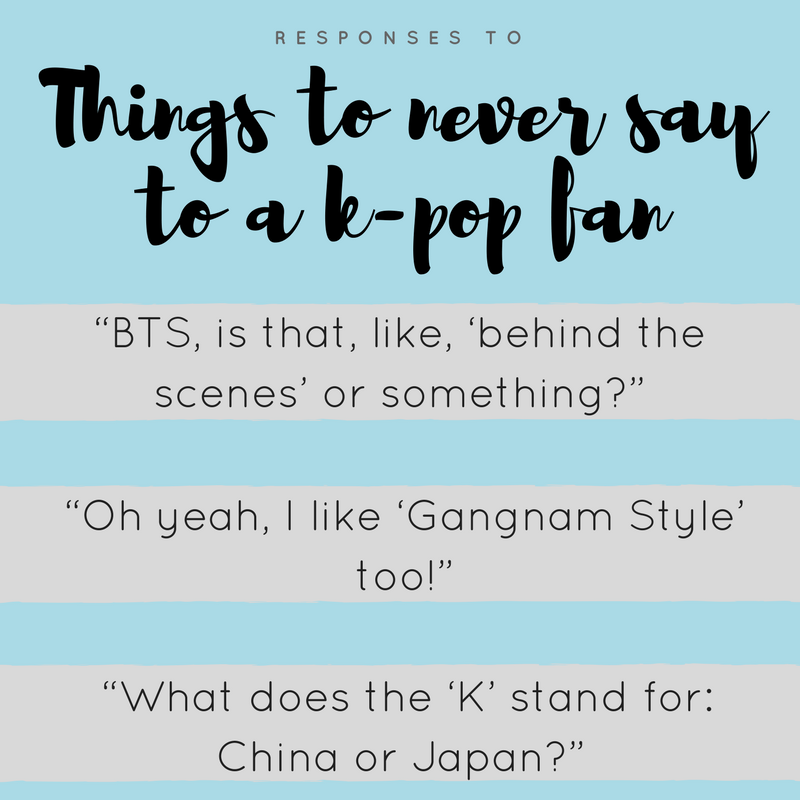 by Nina Gee and Helen Yang

When it comes to music, everyone has different tastes, and most genres appeal to certain groups of people more than to others. One of the first steps in understanding this concept of “different people, different taste” involves a basic level of understanding. K-pop, as a rising musical genre, is often misunderstood by non-fans, who often unintentionally offend fans with ignorant questions. So, to save you from ignorance and K-pop fans from frustration, here are responses to some common questions and comments about K-pop.

Because, you know, “K” obviously stands for Khina and Kapan. Just in general, assuming that every Asian is Chinese or Japanese is like thinking every Caucasian person is either British or American. There are lots of other Asian countries with their own unique music cultures and artists.

Psy’s eccentric “Gangnam Style” may be the most well-known K-pop song out there, but it definitely does not represent the whole genre. Just like in America, many pop artists actually incorporate different elements into their music to form their own distinct style. There are also multiple subgenres within K-Pop too, such as, K-Indie or K-R&B. Take IU’s “Palette,” BTS’s “Blood Sweat & Tears” or BlackPink’s “Boombayah,” for example.

3. “You can’t even understand what they’re saying, so why do you listen to their songs?

Music transcends language. For instance, “Despacito” recently exploded in popularity even amongst non-Spanish speakers, and many people enjoy classical or electronic music that includes no lyrics at all. And Rihanna’s “Work” is written fully in English, yet many people cannot discern the lyrics (except for the deeply meaningful “work, work, work, work, work, work”). However, because many song lyrics tackle issues like mental health, bullying, peer pressure and more, international fans often turn to social media to find translations.

Or, maybe they are their own selves and not impersonations of other artists. Unless you label all humans with functional vocal chords under the same category, no two artists are the same. Aside from artists’ individual musical styles, K-pop typically places a much heavier emphasis on visuals than mainstream Western pop. K-pop music videos often have much higher production value, and singers spend countless hours—sometimes even going on for days with no sleep—to perfect their dance choreographies.

5. “What’s with the rainbow hair and bowl cuts?”

Again, different people, different preferences. Let the singers wear their hair however they want it. Bottom line? You dislike it and decide not to be a fan. This applies to everyone, not just K-pop artists. Besides, anyone who can pull off neon blue hair deserves some serious respect.

Makeup is a way to enhance looks, and like colors, clothing and shoes, does not have to be gendered. Western beauty standards tend to label makeup as feminine, so male celebrities tend to wear much lighter makeup than men in K-pop do—except K-pop is from Korea, which has a totally different set of beauty standards. Male singers in K-pop wear more makeup because it looks good to them (and also to millions of fans). In fact, many makeup brands have begun creating and marketing gender-neutral makeup products. There’s nothing wrong with guys wearing makeup, and we live in a day and age where men should be able to wear makeup and not be questioned for it.

Now, you must be thinking, “What? No cultured soul would ever say something so preposterous!” You’d be surprised how often this exact question comes up. To all the unsure souls out there: South Korea. You know, the one that isn’t ruled by a dictator.

Great. Let’s all discredit them by ignoring the fact that they sing live while dancing in front of thousands of people, because that’s perfectly doable without any training at all. Actually, a lot more work goes into being artists than the flashy performances on camera. Members often produce and write their own songs, and some even help choreograph the dances. Prospective idols often train under entertainment companies from a young age in order to for a chance to debut. These people genuinely love what they do, and are willing to wait a decade to even begin thinking about the prospect of fame.

To the askers’ credit, this is a fairly common and understandable mistake. Still, to K-pop fans, it feels like when your mom texts “lol” at a completely inappropriate occasion because she thinks it means “lots of love,” or when someone thinks LGBT stands for “Let’s be gay together.” Again, this is Korean pop, which means the names are in Korean, not English. BTS originally stood for “Bangtan Sonyeondan,” which means “bulletproof boy scouts” (go ahead and laugh, but just know that they average 252,000 retweets per tweet). However, because so many people have mistaken it for “behind the scenes,” they recently officially rebranded their English name to Beyond The Scene. Thanks a lot, you guys.

So now you know. Many people love K-pop music, fashion and dance, and those people should not be judged for liking something that makes them genuinely happy and helps them get through difficult times in life. At the very least, just realize that K-pop—or anything else, really—cannot and should not be labelled solely based on Western standards. The world is more than the West, y’all.

In the wise words of Jenna and Meena (with a little twist), y’all just got JUNGSHOOKED.