Glance into the daily life of a polyglot 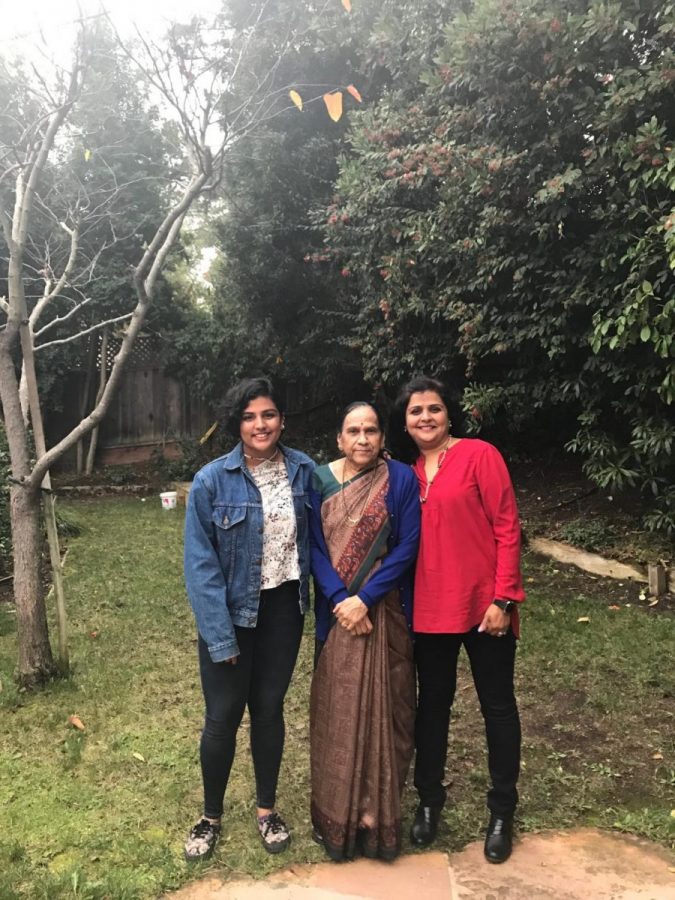 Amla Rashingkar (10) speaks English and Marathi with her family. She grew up using Marathi with numbers and math.

It was 7th grade pre-algebra, where the current topic was basic sequencing with multiplications. One by one, from left to right, the teacher asked each student for the next answer. As my turn drew nearer, I formulated the answer in my head: 65. It was two digits in no particular language, at least that was what I believed. I opened my mouth, and “liu shi jiu,” I said in the language I learnt my times tables in.

Bilingualism and multilingualism. These are two words that can describe the Silicon Valley community. We are a collection of people carrying our family cultures from every corner of the earth and converging at the pinnacle of a technology-crazed future. One meeting point is at the Harker School, consisting of students, teachers and staff with various language backgrounds and associations with multinational sister schools.

Amla Rashingkar (10) regards herself as a bilingual, speaking English and Marathi fluently. Speaking two languages, she finds some difficulties; however mostly she is happy in being able to connect to more people.

“Some disadvantages is that I know words in one language and I’m trying to find it in the other but I just can’t do it. It is a bit frustrating, but I think most of them are just advantages,” she said. “It’s super cool because sometimes I get to bridge the gap between my grandparents and my friends, and it really cool to be that link.”

Amla, like some other bilinguals, was taught certain subjects numbers in one language before the other.

“When I go home with my parents and brother I always talk in Marathi, or I alternate between English and Marathi sometimes in the same sentence,” she said. “I learned how to count and look at numbers in Marathi before I did in English. Whenever I’m doing math or science or something number-related in my head, everything is in Marathi and none of it is in English until I have to work with actual words.”

“I remember when my kids were smaller, when we moved to United States, they would prefer to speak English in front of [their] friends and parents. Then a little bit later, it was opposite of that. It was a cool thing to speak languages that nobody else understood,” Tchourilova said. “Again, there is one famous saying, the knowledge is one baggage that actually the more you have, the lighter to carry.”

Tchourilova believes that knowing more languages can stimulate the brain and curiosity. By learning one language, one can compare grammar and word roots to another.

“[Picking up a language] also depends on what age you start in a language and you had this experience of switching between language, especially in Europe where you’re surrounded languages all the time,” she said. “[Talking about our Switzerland buddies,] when you are child, you can speak French with your buddy, and switch to German with your parents. . . this is kind of a natural facility with the languages.”

Living in Fribourg, Switzerland, Dijellza Zenuni, a student from our sister school Collège de Gambach, is exposed to more than one language and culture.

Dijellza grew up with German at school and Albanian at home; she also studies French, English and Italian.

“It makes learning the language easier if there are people you get to talk with. Like French if [you] can‘t speak French, you are lost in the city,” she said. “Students, spend a lot of time watching movie[s], series and Youtube and listen music, and all the famous ones come from America. That gives us motivation to learn English. And of course English is [the] international language. In Europe all countries speak [some other] language. If you want to communicate or go there or study there, you have to speak their language or English.”

There are unique ways of processing languages one is fluent in. Someone may be clear or unconscious on what language is used in thought or speech.

“Mostly I think in German because I spend the most time speaking German. But if I spend a lot of time with my family, and I get to speak a lot Albanian, my thoughts change automatic[ly]. [Also] sometimes if I watch a film in English, I start thinking in English,” Dijellza said.

Bilingualism and multilingualism can be described as only being able to speak and listen, or also to read and write.

“It is another fascinating aspect of languages. Some people are really good in reading the language and understanding the language, but they don’t have the chance to practice, so they can’t really speak it,” Tchourilova said. “It still gives a huge advantage to this person, because a language is not only for communication – but definitely this is the biggest part – but you can use the language as a tool to understand the culture, the literature.”