Recovery efforts in progress after Napa Valley fires are contained 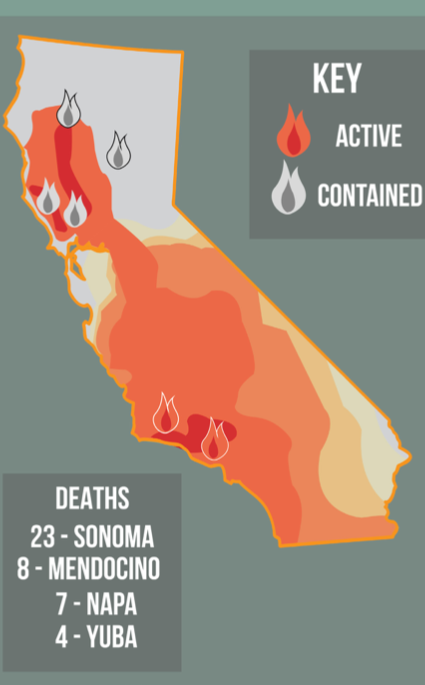 Since early November, though the Sonoma and Napa Valley fires have been contained, the ecological changes the fires have caused could potentially cause more damage. The Sonoma County Fire and Emergency Services Department is among many other organizations working to combat the fires.

California counties are recovering from wildfires that ravaged Sonoma and Napa Valley areas in mid-October as they work towards prevention of future threats.

Since early November, though the Sonoma and Napa Valley fires have been contained, the ecological changes the fires have caused could potentially cause more damage. The destruction of homes, businesses and other property have implications on the short-term economic recovery and the futures of industries. Sonoma County Fire and Emergency Services Department Captain Derrick White has been part of the recovery efforts for the fires in Napa Valley.

“The next big plan we are preparing for is going to be erosion control for the upcoming rain,” he said. “Now that the vegetation has burned away, whenever there are going to be significant rains, that makes an increased threat of erosion and mudslides.”

PG&E has also worked to clear anything which may damage electrical lines.

“As of [Nov. 7], all evacuation orders and road closures are removed in Napa County,” Napa County Public Information Officer Kristi Jourdan said in a statement. “Some homes may not have utilities, including electric and gas. PG&E is working diligently to restore services.”

With major fires occurring in multiple areas around California, many fire departments are low on resources without the help of other departments.

“When we have such large scale fires all at the same time, all within our operating area, it draws resources extremely low down,” White said.

People can prepare for wildfires by signing up for government notifications to learn about potential danger early and have emergency plans with one’s family just in case. White recommends that people maintain defensible space by clearing dead vegetation and using appropriate construction materials. Harker focuses on the safety of the students.

“There’s so many variables in air quality management and prediction,” Director of Health and Services Debra Nott said. “But I will always do my best based on whatever evidence I can get from as many sources as possible. Keeping in mind the safety of the students, faculty and staff is the most important.”

The County of Sonoma and the City of Santa Rosa announced the Sonoma County Consolidated Fire Debris Removal Program, consisting of two phases of debris removal for residents. Phase I involves the U.S. Environmental Protection Agency inspecting the damaged property and removing any hazardous waste that may threaten human and animal health. In Phase II, the California Governor’s Office of Emergency Services, the Federal Emergency Management Agency (FEMA) and local officials are coordinating with the U.S. Army Corps of Engineers (USACE) to conduct fire-related debris removal. The deadline for entry to the program was Nov. 13.

The City of Santa Rosa has encouraged people to donate to the United Way of Wine County’s Relief Fund.

This piece was originally published in the pages of the Winged Post on November 16, 2017.