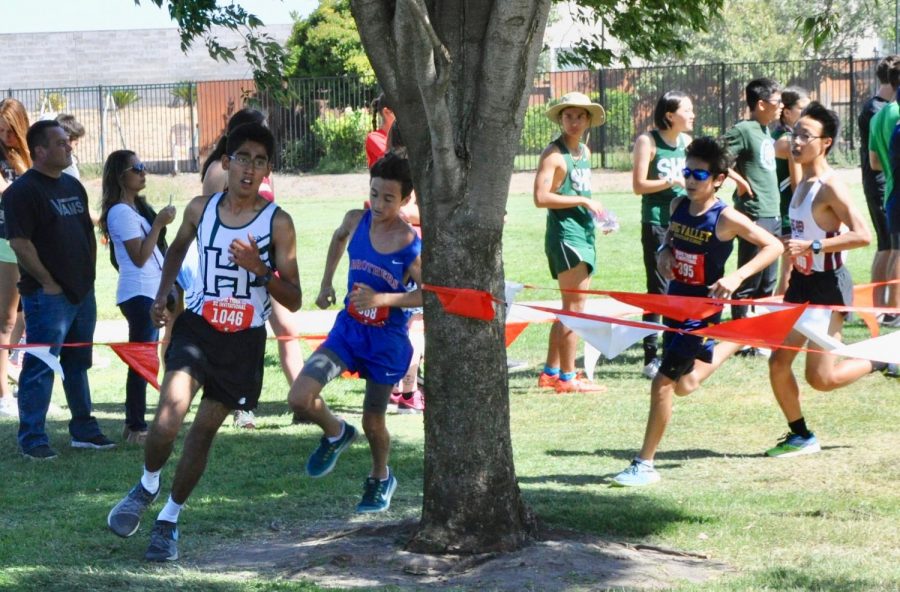 Last spring, I wanted to try a new sport. I knew I could run, so track seemed like a natural choice. Having never been part of a school team before, I did not know what to expect when I showed up for the first day of practice at the Blackford track. Feeling nervous, I took some solace in the fact that track was a no-cut sport—at the very least, I would make the team.

One of the first events I timed was a 400-meter dash against Arya Maheshwari (9), who had a reputation as a legendary runner at Harker. Standing at a rather moderate 5 feet 3 inches, however, he did not look to be intimidating, especially when contrasted with my significantly longer legs. The two of us lined up at the start of the curve as a coach yelled “go,” starting the timer. For almost the entire first half of the race, I ran right on Arya’s heels—until he unleashed his final sprint, or kick. In a manner that I have become uniquely acquainted with, he tapped into a reserve of energy that gave him the speed to finish 10 seconds ahead of me, for just one lap of the track.

This was the very beginning of my experience with running. Motivated by a desire to improve my times, I stuck with the sport and ended the eighth grade track season with a successful meet, which Harker ultimately won. As I ran the three longest track events, I suspected I would be better suited for cross country and joined the team this year. Having discovered I am much better over longer distances, it is now my primary sport.

Running, especially long-distance running, is often disparaged and cast into the realm of “fake” sports. People are often perplexed about what drives any runner to keep moving, repeating the same monotonous striding motion to the point of exhaustion. But the beauty of running lies in its invariability, in the fact that you are the only person responsible for your race, without any luck involved. Improvement is measured down to the nearest hundredth of a second, rendering lying to yourself impossible. This makes running as much a mental sport as it is physical. In each race, you have to propel yourself forward as hard as you can, even as you want to quit. You have to strategize, trying to not get burnt out early and continuing to run if you do. Especially difficult is the kick at the end of each race, where you truly “leave it all out there,” competing to shave every hundredth of a second off.

From an outside perspective, running sounds both exhilarating and hellish—but jumping the mental hurdles that you encounter during a race is a truly amazing process. Nothing compares to the satisfaction I gain from zooming past a person on a steep downhill or looking back on a race and knowing I kept going even as my legs were ready to give out. Cross country practice every day has become my outlet to forget about school, studying and temporarily shed my stress.

My experiences with running have been short—the first time I stepped out onto that Blackford track was a mere eight months ago. Yet, even after such a brief period, being a runner has truly become a part of my identity.