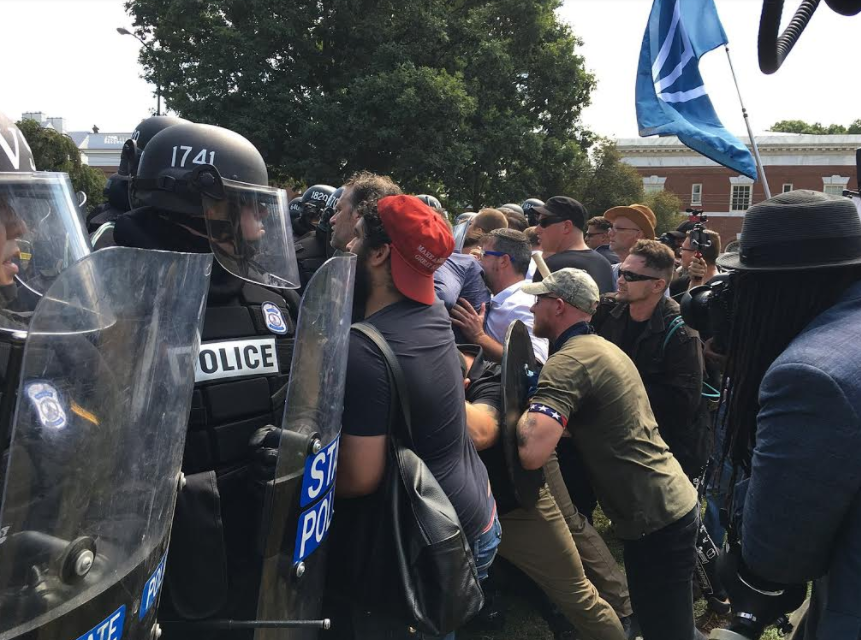 Protestors and police come into contact at the Unite the Right rally in Charlottesville on Aug. 12.

Nationwide controversy emerged surrounding the extent and limitations of the First Amendment after a white supremacist “Unite the Right” protest in Charlottesville, Virginia, on Aug. 11 and Aug. 12. 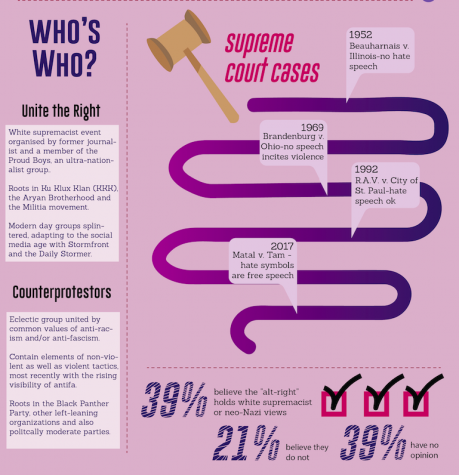 While white supremacists held rallies in Charlottesville in May and July, the August demonstrations — both in Charlottesville and later throughout the nation — were larger-scale, with the exception of a few where the number of counter-protesters dwarfed that of the protestors.

The stated purpose of the Charlottesville rally was to protest the June renaming of Emancipation Park from Lee Park and the planned removal of a statue of Confederate general Robert E. Lee from the park, where it has stood since 1924.

Violence at the rally began when protesters marched through the University of Virginia campus chanting white supremacist slogans on Aug. 11; when they met counter-protesters, several on both sides sustained minor injuries.

On the planned rally date the next day, white nationalists, some holding Confederate flags or anti-Semitic posters, again clashed with counter-demonstrators in Emancipation Park. Chaos and attacks including chemical sprays caused the city to declare a state of emergency due to the unrest.

The protest resulted in three deaths and 35 injuries. A man, later charged and identified as James Alex Fields Jr., drove through a crowd of counter-demonstrators on Aug. 12, injuring 19 and killing one, and a state police helicopter crash resulted in the deaths of two law enforcement officers later in the day.

Five protesters assembled for the rally were caught on video committing aggravated assault against a black man, DeAndre Harris. On Aug. 25, Daniel P. Borden was charged with malicious wounding in connection to the assault, and a wanted poster was issued for Alex Michael Ramos.

Since the events in Charlottesville, numerous protests and counter-protests have been organized around the country in cities including Boston, Seattle, New York City and Berkeley.

On Aug. 25, the Friday before two right-wing rallies in San Francisco and Berkeley were intended to take place, organizers cancelled, following pushback from locals.

The organizer of the San Francisco rally state that he does not support white nationalism and the rally was intended for free speech. However, both rallies received pushback from locals after the violence at the Unite the Right rally in Charlottesville.